Rea outpaces the MotoGP riders on day two at Jerez 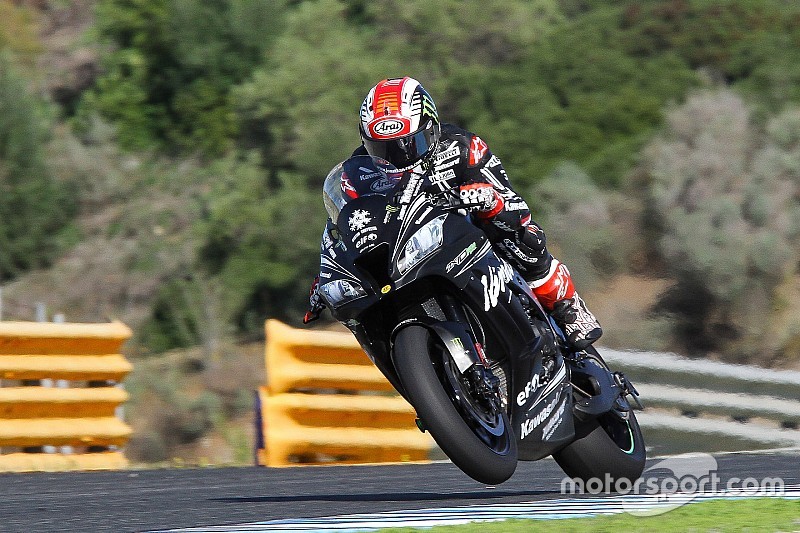 While on the opening day the Kawasaki rider sent a warning by finishing just a tenth away from the best time (set by Hector Barbera), on the second day he lowered the MotoGP pole position time at Jerez.

The rain forecast at the Spanish track on Thursday did not materialise, and while the temperatures started off low, the sun warmed up the asphalt enough to allow riders to set good times later in the day.

The 1:39.614 set by Barbera as the reference time on the opening day was beaten by six riders, including the Valencian rider himself, but only two riders managed to get beneath the 1m39s mark.

Alvaro Bautista, in his fourth day with the Aspar Ducati, stopped the clock at 1m38.946s, a little over two tenths slower than the track record, set by Jorge Lorenzo, a 1m38.735s.

That was underneath the pole time from the previous Spanish GP (Valentino Rossi, 1m39.736s), but it is still far from the 1m37.910s that Lorenzo managed in 2015, the final year with Bridgestone tyres.

The surprises did not stop there as Ducati World Superbike rider Chaz Davies finished third on a 1m39.116s, ahead of Loris Baz, second quickest of the MotoGP riders, and Tom Sykes on the second Kawasaki ZX-10R.

Jack Miller was best of the Honda riders, ninth among the MotoGP riders, ahead of Mika Kallio on the KTM and Takuya Tsuda, the sole representative for Suzuki after Andrea Iannone ended his test early.