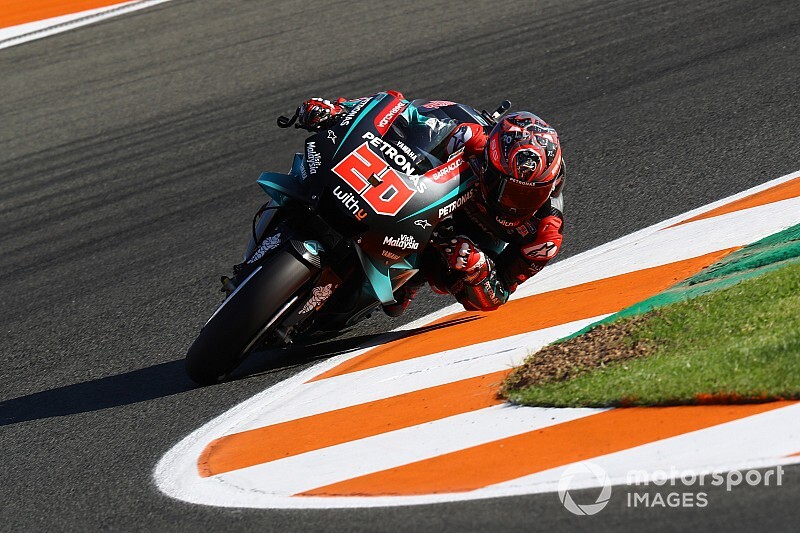 World champion Marc Marquez set the pace for most of the session, but was deposed in the final few minutes by Miller and Quartararo, who fired in a 1m31.455s right at the death.

Marquez led the early stages of FP1 with a 1m32.327s, which he quickly chipped away at to produce a 1m31.665s to go almost a second clear of the field.

Another effort of 1m31.532s was set to further his advantage, but 1m31.976s from Yamaha’s Valentino Rossi ensured his gap would only be four tenths.

The Honda rider’s laptime stayed the benchmark for almost the entire session, with Maverick Vinales emerging as his closest challenger for while with a 1m31.595s.

Quartararo began lighting up the timing screen on his final effort, and took over top spot from Miller by 0.057s, while Marquez was just 0.020s behind the Pramac bike in third.

Vinales couldn’t find time in the final flurry of laps and remained fourth with his earlier effort, while the sister Petronas M1 of Franco Morbidelli completed the top five to cap off a near-perfect morning for Yamaha.

Rossi was still a factor in that battle for top sport come the closing stages, but a crash at the Nico Terol right-hander of Turn 4 late on resigned him to eighth.

Joan Mir was sixth on the first of the Suzukis, with Pol Espargaro seventh in FP1 at the scene of his and KTM’s maiden podium last year.

Behind Rossi came the works Ducati of Andrea Dovizioso, while Alex Rins rounded out the top 10 on the second of the Suzukis.

Ducati wildcard Michele Pirro’s morning didn’t get off to the best of starts, as he was forced to abandon his Desmosedici when it caught fire.

He returned to the circuit shortly after on his second bike and was 14th behind LCR stand-in Johann Zarco, Aprilia’s Aleix Espargaro and Danilo Petrucci on the third of the works team Ducatis present this weekend.

Jorge Lorenzo’s farewell weekend kicked off with him sitting 1.4s off the pace in 18th, though only two tenths off of LCR’s Cal Crutchlow in 15th.

He headed Avintia’s Karel Abraham, who was the only other crasher aside from Rossi in the session – the Czech rider falling at Turn 10.

Moto2 frontrunner Iker Lecuona made his MotoGP debut in FP1 in Valencia filling in for the injured Miguel Oliveira on the Tech3 KTM he will ride full-time next year.

He completed the 23-rider field, 3.1s off the pace after 20 laps, though just two tenths adrift of team-mate Hafizh Syahrin.