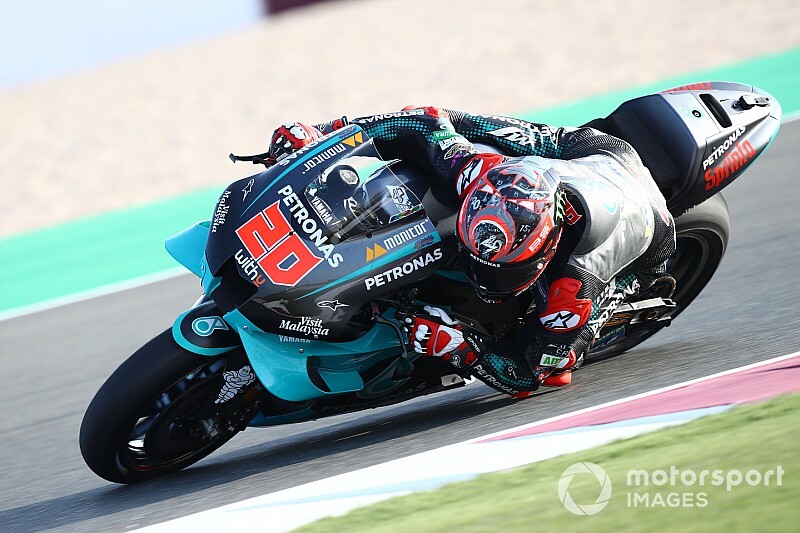 Fabio Quartararo put Yamaha on top of the timesheets on day two of the Qatar MotoGP pre-season test, as the injured Marc Marquez destroyed his Honda in a heavy crash.

Petronas SRT rider Quartararo topped the Sepang test outright after leading all three days in Malaysia, and was an early pacesetter on Sunday at Losail with a 1m54.974s lap.

This stood as the benchmark for some time, before his SRT teammate Franco Morbidelli on the ‘A-spec’ M1 took over with a 1m54.954s with just under four hours to go.

Mir’s day would be cut short by a late tumble and he ended up seventh in the standings after a number of improvements in the closing stages.

Vinales would return to the top of the timesheets with around an hour and 45 minutes of the session to go, though only for 15 minutes as Quartararo raised the benchmark to 1m54.038s.

This would go unopposed through to the end of the session, with Saturday pacesetter Alex Rins on the Suzuki his closest challenger 0.162 seconds adrift.

Vinales rounded out the top three ahead of Morbidelli, while Francesco Bagnaia was top Ducati runner in fifth as he continues to adapt from the GP18 he rode last year to the GP20 in Pramac colours.

Johann Zarco made a considerable step forward in his adaptation process to the Avintia GP19, as he ended the session half a second off the pace in sixth ahead of Mir and the works Ducati of Andrea Dovizioso.

Valentino Rossi – who said on Saturday that he still needs to find “two or three tenths” to fight for victory on the new Yamaha – was ninth, with LCR’s Takaaki Nakagami completing the top 10 on the year-old Honda.

Aleix Espargaro was top Aprilia in 11th, though suffered a crash at Turn 4 during the session. He headed Petrucci, KTM’s Pol Espargaro and Marc Marquez.

The Honda rider is still suffering from the shoulder surgery he had in the winter, with a pinched nerve from that operation causing him the most problems.

His Qatar test failed to improve on Sunday, as a big crash at Turn 9 in the early evening destroyed his bike – with Honda reporting via social media that he walked away uninjured.