Quartararo 'can only be happy' with Jerez weekend 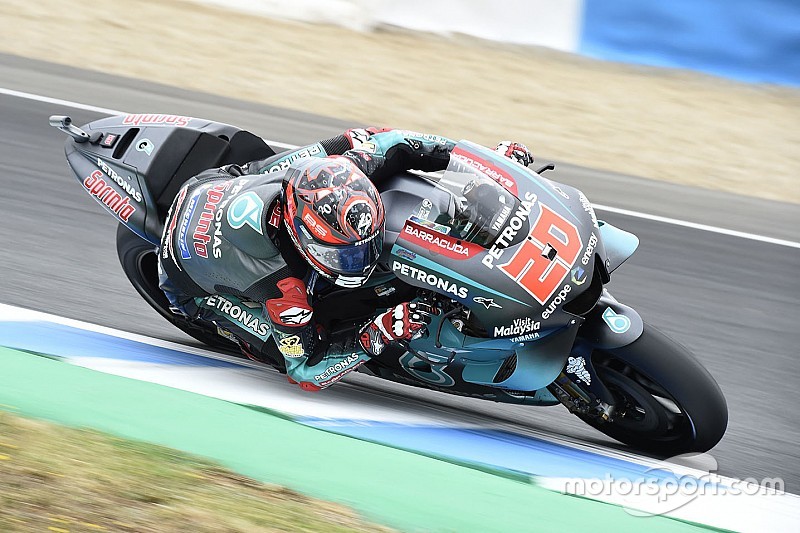 MotoGP rookie sensation Fabio Quartararo said that he doesn't feel negative about his Spanish Grand Prix, despite it ending with a mechanical retirement.

Quartararo became the youngest ever MotoGP pole-sitter on Saturday and was firmly in podium contention during the race.

He spent the early stages close behind Marc Marquez and Franco Morbidelli and then passed his teammate - who had started to struggle for pace - before his bike slowed due to a gearbox problem.

The 20-year-old said that while he was obviously disappointed with the outcome, he cannot be too down about his Jerez experience.

"I was really disappointed because we can challenge for really good position," Qaurtararo said.

"Fortunately when you look at the pace I had, we weekend we do, I only can be happy at the moment.

"No podiums, no top five but the experience we take is a lot."

Quartararo said that riding alongside stars such as Marquez made him faster during the race, and that he felt like he was more experienced than he was.

"The pace I had in the race was incredible because I found something, riding with these guys that make me a plus also I had Marquez like a reference.

"The pace was fast but when you are riding with these guys on the first laps I learn many things, I was acting on the bike like I have more experience [than I do], only that is my fourth race.

"I take a lot of experience. Unfortunately we didn't finish the race but we need to take all the positive and leave the negatives here."

When asked if he thought he could have stayed in the top three for the entirety of the race, he said: "I don't want to say yes, but I think so, that we can fight for the podium on this race."

Marquez: Manner of Jerez win a statement to MotoGP rivals