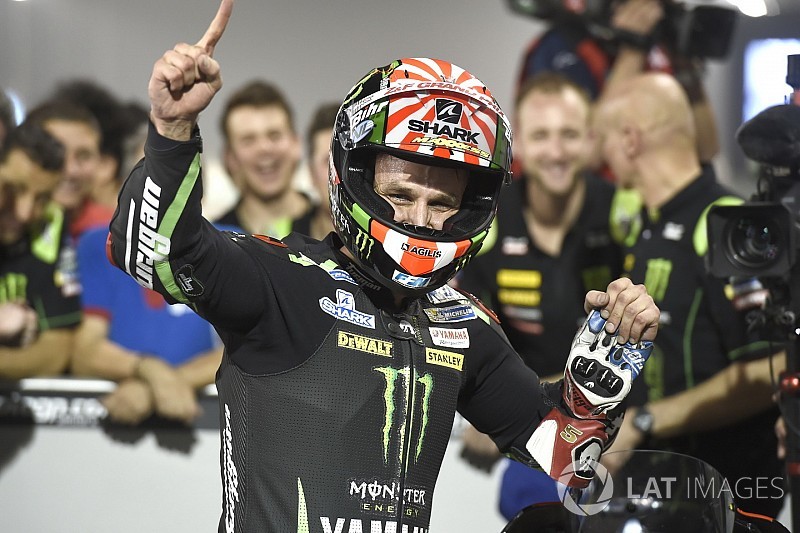 Tech 3 Yamaha's Johann Zarco took pole position for the opening round of the 2018 MotoGP season at Qatar, establishing a new lap record by almost a quarter of a second.

Zarco's best laptime of 1m53.680s beat the existing record of Jorge Lorenzo set in 2008 by 0.247s, and gave him his third premier class pole by 0.202s ahead of reigning champion Marc Marquez's Honda.

Marquez was quickest on the first runs and led on a 1m54.368s, but was then knocked off the top spot by Andrea Dovizioso, who set a 1m54.074s on his works Ducati.

Dovizioso looked good for pole heading into the final stages, but was shunted down to fifth in the final order amid a late flurry of improvements led by Zarco and Marquez.

Danilo Petrucci set a lap just 0.005s slower than Marquez to take the final spot on the front row and end up the best of the Ducati runners on his Pramac-run GP18, while LCR Honda rider Cal Crutchlow edged out Dovizioso for fourth by two thousandths.

Alex Rins completed the second row on the best of the Suzukis behind Dovizioso, ahead of Dani Pedrosa's Honda and Valentino Rossi, who was 0.709s off the pace on the quicker of the two works Yamahas.

His teammate Maverick Vinales was slowest of all in Q2 and the only rider not to get within a second of Zarco, and will start 12th - behind Lorenzo's Ducati, Jack Miller on the second Pramac machine and Andrea Iannone's Suzuki.

While Vinales was the highest-profile rider having to make his way through Q1, his benchmark lap of 1m54.637s was beaten in the dying stages of the session by Miller.

The Pramac rider had already established himself in second when he logged a time just 0.003s faster than Vinales at the chequered flag.

Just missing out on advancing to Q2 was Aprilia's Aleix Espargaro, who'll head up the fifth row ahead of leading rookie Franco Morbidelli (Marc VDS Honda) and an impressive Hafizh Syharin on the second Tech 3 Yamaha.

Both KTM riders suffered problems, with Bradley Smith 20th after his RC16 stopped on the way out of the pits. Pol Espargaro was 22nd after hitting similar issues.

LCR Honda's Takaaki Nakagami could do no better than 23rd after a crash in FP4 just before qualifying.

Zarco doubts he has pace for Qatar MotoGP win