Pramac Ducati would be open to Iannone reunion 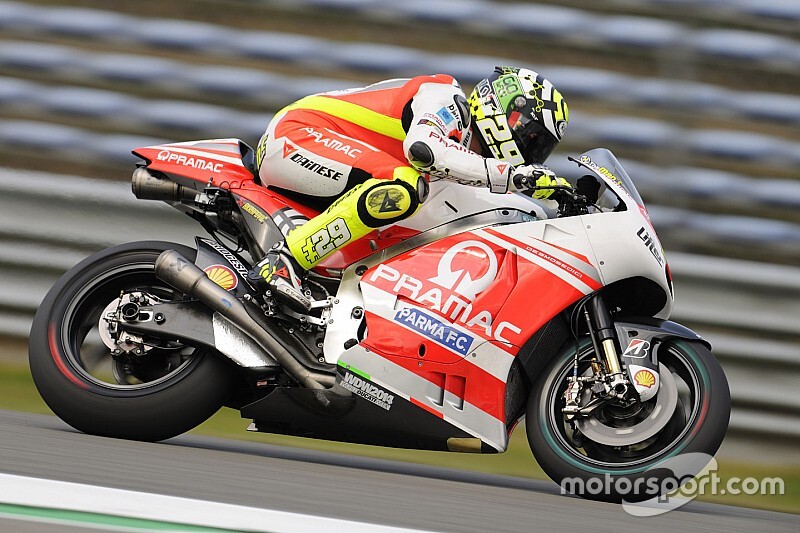 Pramac Ducati MotoGP boss Francesco Guidotti admits he would be open to a future reunion with his disgraced former rider Andrea Iannone in the right circumstances.

Aprilia rider Iannone, who is currently serving an 18-month doping ban, was part of the Pramac set-up in 2013 and '14 before getting a promotion to the works Ducati squad in 2015.

He won the Austrian Grand Prix in 2016 aboard a Desmosedici, but by then he had lost out to Andrea Dovizioso in the fight to be kept on as Jorge Lorenzo's teammate in 2017, and subsequently moved on to Suzuki.

Iannone then switched to Aprilia for the 2019 campaign after Suzuki elected to replace him with Joan Mir after two up-and-down seasons.

Although Pramac has focussed largely on developing younger riders since it parted with Iannone, and currently runs two riders - Jack Miller and Francesco Bagnaia - who are on factory Ducati deals, Guidotti said having the 30-year-old back could be an attractive option.

"There is a very strong emotional bond between us, because we have spent two intense years together," Guidotti told Sky Italia. "Who knows, maybe if the occasion came up again we would discuss it for sure.

"It's clear that with him, unlike with others, we didn't reap the benefits of our work because in the two years he was with us we were in a very difficult technical situation. Ducati wasn't as competitive as it is today.

"It would be nice to close the circle with Andrea. He took his own path, but there's still a bond.

"We are mainly focused on young people, Iannone would come back to us in his 30s, but historically we love him: if we were in the situation that we were missing a rider and he was looking for a bike, we could also do it."

However, Guidotti expressed doubt that, even if the timing was ever right to sign Iannone, Aprilia would be willing to release the Italian, even in the context of his ban.

Although Aprilia Racing boss Massimo Rivola initially said a lengthy enforced spell on the sidelines for Iannone would likely end their relationship, he has subsequently come out strongly in his rider's defence, labelling the decision made by the FIM "absurd".

"I think he's fine where he is at the moment," Guidotti said. "Aprilia realised it needed him, it realised he is a strong, fast rider. I don't think it's going to let him get away."

Guidotti's comments follow Iannone admitting in a Q&A on Instagram last month that he regrets how his tenure at Ducati came to an end.

“In hindsight, you would always change something from your past,” Iannone said. “In my case, I shouldn’t have gone away from Ducati.

“The seasons of 2015 and 2016 had been very good for me. The bike in particular was frightening in acceleration and braking, while suffering on entry to corners. I switched to Suzuki [in 2017] and found the opposite."

Avintia in the "red zone" amid enforced MotoGP hiatus