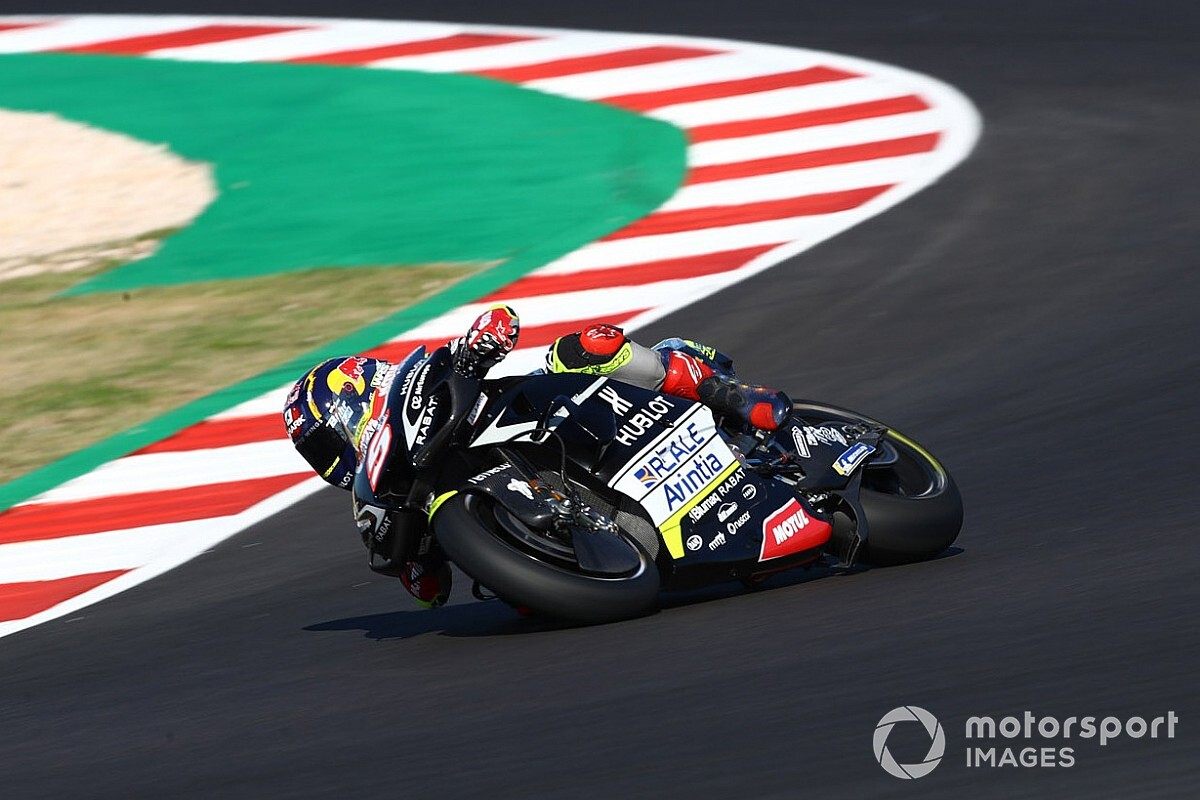 Avintia Ducati’s Johann Zarco topped a tight second MotoGP practice for the Portuguese Grand Prix as Valentino Rossi struggled on his Yamaha to 21st after a crash.

The second 70-minute session of the day began as the first finished, with home hero Miguel Oliveira fastest on his Tech3 KTM with a 1m41.802s.

Just as the Portuguese rider posted that lap, Suzuki’s Alex Rins became the first crasher of the day when he fell at Turn 8 after five minutes of running.

Aprilia’s Aleix Espargaro was the next runner to go top of the pile with a 1m40.969s, with the likes of Takaaki Nakagami on the LCR Honda, Zarco, Franco Morbidelli on the SRT Yamaha and Honda’s Stefan Bradl going fastest across the opening 15 minutes.

The Algarve Circuit caught out a couple more riders in the final 40 minutes, with Nakagami crashing at Turn 4 and appearing to hurt his left hand, while Rossi had the same fall around 15 minutes later.

Bradl went fastest again with a 1m40.240s, before Morbidelli guided his Petronas SRT Yamaha to a day-best of 1m40.079s.

Fellow Yamaha rider Maverick Vinales put this time under threat as the session dipped into its final 15 minutes, with the Spaniard producing a 1m39.931s on a set of hard tyres.

A salvo of flying laps in the closing stages shuffled the order dramatically, with Jack Miller on his Pramac Ducati taking over from Vinales initially with a 1m39.895s.

Zarco pipped his Ducati stablemate with a 1m39.744s, before Vinales fired in a 1m39.664s having switched to fresh soft rubber for a late time attack.

But Zarco had one last sting in his tail and ended the day fastest of all on his year-old Ducati with a 1m39.417s in a field which 0.921s covered the top 18 runners down to Honda’s Alex Marquez.

Vinales was second with a final effort of 1m39.536s, with Aleix Espargaro completing the top three on his Aprilia ahead of SRT’s Fabio Quartararo and Brad Binder on the KTM.

The late flurry of laps shuffled Bradl outside of the provisional Q2 places in 11th, with Nakagami and Oliveira also being dumped down the order.

Rins ended his day down in an off-the-radar 17th, while there will be some concern in the Yamaha camp after Rossi finished Friday 1.862s off the pace down in second-to-last ahead of Tech3 stand-in Mika Kallio.