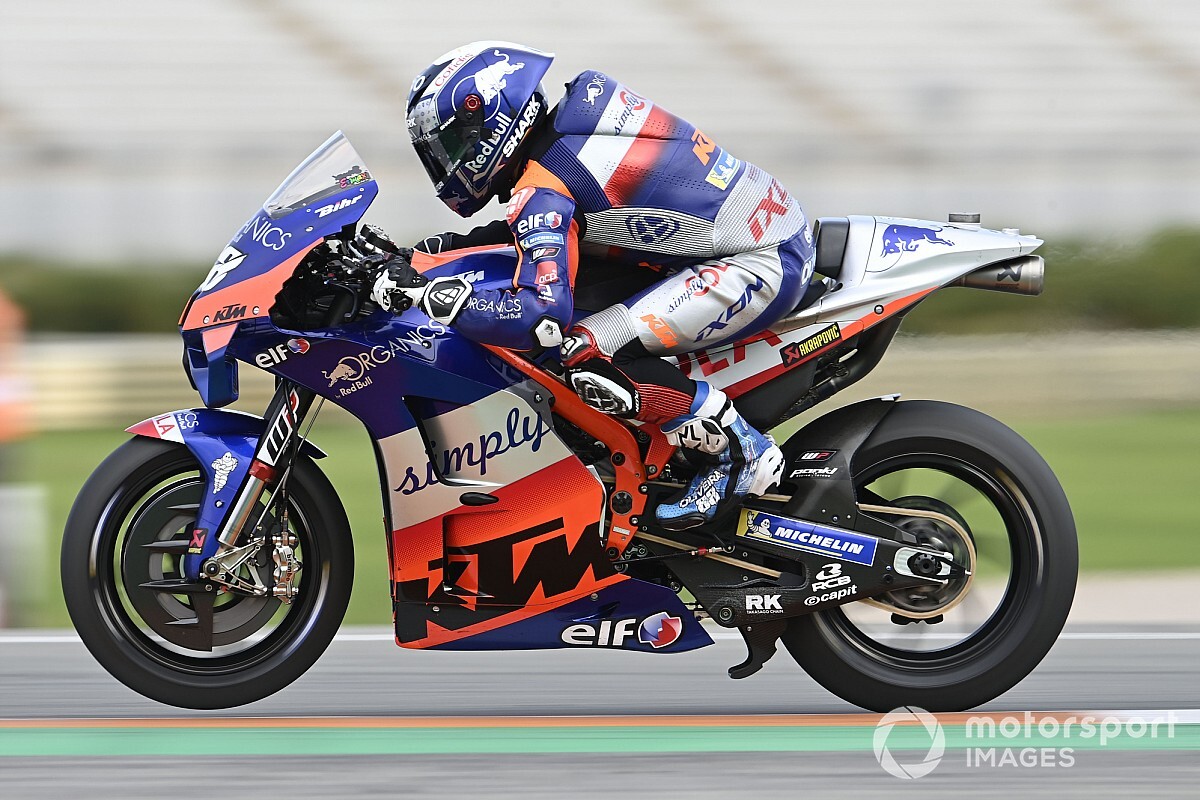 Home hero Miguel Oliveira topped FP1 for MotoGP’s first Portuguese Grand Prix since 2012 ahead of the 2020 season finale at the Algarve International Circuit.

MotoGP’s return to Portugal coincides with its first visit to the Algarve circuit, having previously run at Estoril.

Friday’s practice sessions have been extended to 70 minutes each to allow ample time for track familiarisation at the Algarve Circuit – though a select few have MotoGP mileage already under their belts after last month’s test.

Newly-crowned world champion Joan Mir set the early pace with a 1m43.169s, though lap times would steadily improve as the session wore on.

The opening 25 minutes featured a trading of top spot between Oliveira on the Tech3 KTM, Suzuki’s Alex Rins, Pramac’s Jack Miller and the factory Yamaha of Maverick Vinales.

The latter’s 1m41.427s would stand for another 15 minutes before Oliveira – who is incredibly familiar with the Algarve track – deposed Vinales with a 1m41.258s.

This wouldn’t stand for long, however, as Honda’s Stefan Bradl who - along with the Aprilia duo – did ride his RC213V in last month’s test shot to the top of the order with a 1m41.235s.

Looking to overturn his recent miserable run, Fabio Quartararo admitted on Thursday his main priority is to simply have fun.

With the high grip levels from the resurfaced asphalt playing into the Yamaha’s hands, Quartararo went fastest with a 1m40.877s with just over 22 minutes of the session remaining.

The Petronas Yamaha rider would be dethroned by factory counterpart Vinales, who dipped underneath the best lap Aleix Espargaro set at the Algarve test by 0.008 seconds with a 1m40.162s.

But Oliveira lit up the timing screens on his final lap and produced a 1m40.122s to end the session 0.040s clear of the Yamaha rider.

Aprilia’s Espargaro led his teammate Lorenzo Savadori in third, with Pol Espargaro rounding out the top five at the start of his final KTM appearance.

Cal Crutchlow’s farewell MotoGP weekend as a full-time rider began with him in sixth spot on the LCR Honda, with Mir, Quartararo, the sister LCR Honda of Takaaki Nakagami and Bradl completing out the top 10.

Rins didn’t go for a time attack late on and ended up 11th ahead of Andrea Dovizioso on the Ducati and Petronas man Franco Morbidelli, while fellow Yamaha rider Valentino Rossi was a low-key 19th as he gets set for his final weekend with the factory squad.

The 22-rider field was completed by KTM tester Mika Kallio, who is replacing Iker Lecuona at Tech3 after the Spaniard tested positive for COVID-19 last week.