By:
Gordon Hatch
Listen to this article

It’s important to be on the front row in pole position but tomorrow is what counts.

Lorenzo was on the pace right from the start of the hour long session that started with drama when with just seven minutes gone, Dani Pedrosa lost the front of his RC213V machine leaving the Spaniard with only his spare bike to use in the remainder of the session. There was also bad luck for Yonny Hernandez (Avintia Blusens) with less than a quarter of the session gone when he crashed out but the Columbian rider was unhurt. There were a number of crashes early on with many teams putting this down to the fact that free practice yesterday was affected all day by rain.

The pace on the Spanish track continued to improve with more and more rubber being laid down and Lorenzo took full advantage of this setting lap after lap in the 1m 50s time bracket and the pole position man eventually set a best lap of 1m 49.404s ahead of Pedrosa’s who, despite being on his spare bike, managed a time very close to his rival of 1m 49.492s. Crutchlow had also sat on pole within the final ten minutes but the British rider had to settle for his best time of 1m 49.576s good enough for 3rd place.

Starting from the front of the second row tomorrow will be Ben Spies on his Yamaha Factory Racing YZR-M1 with the American setting a best lap of 1m 49.748s ahead of rookie Stefan Bradl who also sat in pole position halfway through the session and eventually ending up with a 5th place start (1m 50.034s). The final place on the second row went to Andrea Dovizioso (Monster Yamaha Tech 3) who was also very strong during the hour and set a best lap time of 1m 50.241s.

Arguably the best performance by a stand in rider in MotoGP for some time, Jonathan Rea stunned the paddock when he set a time of 1m 50.410s at the end of the session that was good enough to secure a 7th place start and amazingly ahead of seven-time MotoGP World Champion Valentino Rossi (Ducati Racing) who set a best lap of 1m 50.949s that was set on his spare bike following his crash halfway through the session. Rossi’s teammate Nicky Hayden snatched the final place on the third row with a best lap of 1m 51.013s but the American rider crashed at the end of the session and walked away with an apparent arm or wrist injury. 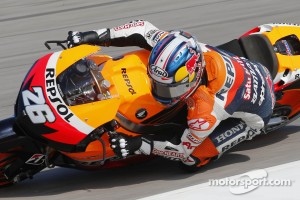 Speaking afterwards, Lorenzo said he is hoping for good weather conditions tomorrow. He said, “I feel happy, I really thought Cal would take pole position because his lap time was really quick but finally we managed to improve our lap time with the last qualifying tire. It’s important to be on the front row in pole position but tomorrow is what counts, we have to do a lot of laps and it’s going to be a long race. Let’s see how the weather is, we all hope it’s not going to rain, it’s much better if it’s dry.”

Taking a second place start was a good result according to Pedrosa after his crash early on. “It's a very good result for us after all the issues we had!” Pedrosa said who continued, “I'm really happy to be on the front row and so close to the pole position. After the crash I had at the beginning of the session - I guess due to cold tyres because I was not pushing at all - we only had one bike left with 50 minutes remaining. I lost some time there and when I went out with the second bike I realized that I had to remain calm because it was the only bike I had for the rest of qualifying and also the only front tire.

At the beginning, I was cautious trying to set a decent lap time and towards the end I just forgot about everything and pushed harder for the front row. We have a good position for the start, I just hope everything goes smoothly and we can have a great race tomorrow in front of the home Spanish crowd,” Pedrosa added. 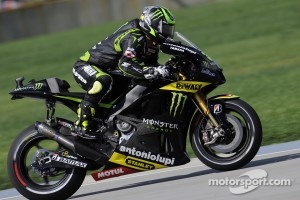 Praising his crew Crutchlow said, “I think we did a very good job today to finish on the front row when this session was the first time we have been able to work on the settings in the dry. My main aim for the session was to get the bike set-up for the race and immediately out of the box I was fast and all through the session I was able to steadily improve my pace. I'm confident going into tomorrow's race because the bike feels good, despite the fact that we missed a lot of dry track time, so credit to my Monster Yamaha Tech 3 crew because they did a fantastic job again.

I thought we'd be struggling more because Jorge, Dani and Ben all tested here for two days recently, so to be so close to them shows we've done a great job. That is the third front row start on the bounce now but after Misano I have got to finish the race tomorrow. Hopefully it will be in the top three because it would be great to get another podium,” Crutchlow added.