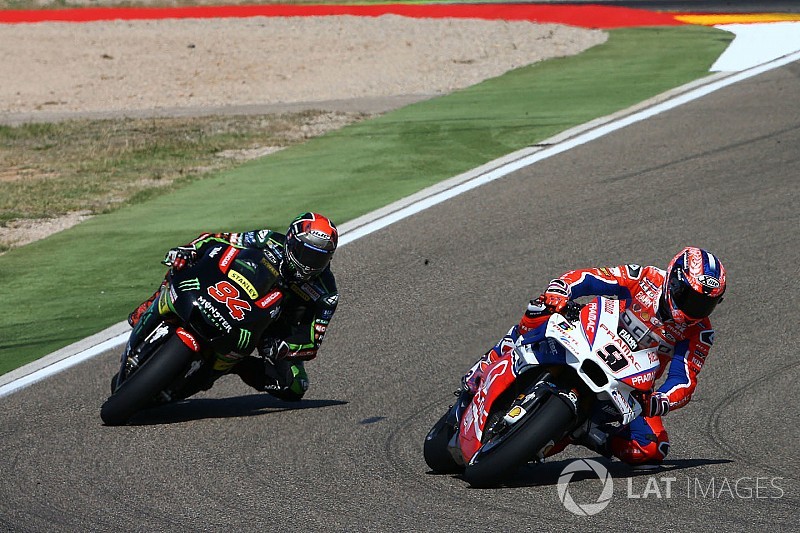 After coming within an ace of a first MotoGP victory in the wet at Misano, only being passed for the win by Marc Marquez on the last lap, Petrucci was not competitive at any stage of the Aragon weekend.

Failing to make it out of Q1, the Italian qualified a lacklustre 16th before faring even worse in the race, trailing home 37 seconds behind race winner Marquez in 20th place.

Asked to explain his lack of speed, Petrucci said his medium compound rear tyre wore out at an unusually fast rate, and that he finished the race with only “half a tyre”.

He said he would ask Michelin to examine the tyre for a possible defect.

“I finished the race a lot of seconds behind the first group, and my tyre is the most consumed of all the riders,” said Petrucci. “We never see consumption like this.

“I miss 1.3 kilos of tyre, it’s half a tyre. I was missing the rubber on the tyre. And going so slowly I don’t understand how it’s possible.

“Maybe I weigh a little bit more [than most riders], but I’m not 200kg! And I did other races so good and this time it was impossible to stay with the others.”

He added: “For sure we ask Michelin to see if the tyre was good, we will see. I don’t know, maybe the tyre is not so good.

“But I’ve not been competitive all weekend and this makes me sad. I wanted to earn some points on my direct rivals for the non-factory championship.”

With Jorge Lorenzo coming third, Petrucci has slipped to eighth place in the standings – 22 points behind lead satellite rider Johann Zarco, who came ninth in Aragon.

Pramac's other rider Scott Redding opted for a soft rear tyre to score two points for a 14th place finish after qualifying down in 22nd.

Dovizioso: 16-point swing to Marquez "not a drama"