Petrucci could quit MotoGP if not retained by Ducati

Ducati rider Danilo Petrucci accepts his MotoGP career could be over should the Italian manufacturer opt not to renew his contract for 2020.

The Italian was promoted to a works ride alongside Andrea Dovizioso this year but was handed an unusual one-year deal, with Ducati preferring to keep its options open for 2020.

And while Ducati's sporting director Paolo Ciabatti has described Petrucci's first podium in factory colours last time out at Le Mans as “very important”, he also stressed no decision on next year's line-up would be taken before late June.

Speaking ahead of his home race in Mugello, Petrucci said: “Clearly, I don't have a contract for next year. I'm trying to earn it and doing my best, calmly.

“I would like to race in this team for many years. If this is not possible, I will have to take note of it and maybe do something else, also because there are no other alternatives.

“There are physically no other places on the MotoGP grid.”

Petrucci is the only factory rider in MotoGP whose contract runs out at the end of the year, meaning he will have no other works options unless a manufacturer opts to cut an existing deal short in order to accommodate him.

“I want to do my best, and if Ducati then tells me that they won't renew my contract for 2020, I'll be happy,” Petrucci said.

“But if I can't do well with this bike, it's not that I can do better with another, so maybe I'll find something else to do in life.”

As confirmed by Ciabatti, Petrucci's only rival for the 2020 deal is Pramac's Jack Miller, who currently sits one spot behind the fifth-placed Italian in the riders' standings.

Complicating the situation for both is that the only guaranteed Ducati GP20 ride for next year outside of the factory team is earmarked for Pramac rookie Francesco Bagnaia.

Pramac boss Francesco Campinoti has however suggested that the squad could run two current-spec bikes next season in the event it retains its existing line-up.

Campinoti told MotoGP.com: "In the case of Jack [staying] he will have a 2020 bike because I don’t see any other way to make him happy and if it will be a rookie, we will see.”

Miller relaxed about staying at Pramac

While Petrucci, who spent four years with Pramac, has not said whether he would entertain a return to the outfit, Miller confirmed he would have no qualms about staying.

“I'm not too stressed, to be honest. Whether we end up in the red seat or potentially stay where we are, I'm happy where I am,” Miller said.

“I'm loving it, I've got good support from the factory, I'm in a great team, good people around me, good management around me as well in terms of the structure in the team. So I'm not too stressed, there's no other real options out there.

“For sure we're talking to people, having a look, in terms of other teams – but whether I go to the factory Ducati or stay where I am, I'm happy.

“I feel my goal is to do another one-year contract, I feel it's good for me, it puts more pressure on me and makes next year even more important.

"Definitely don't want to be doing anything longer than a one-year contract, that's for sure.” 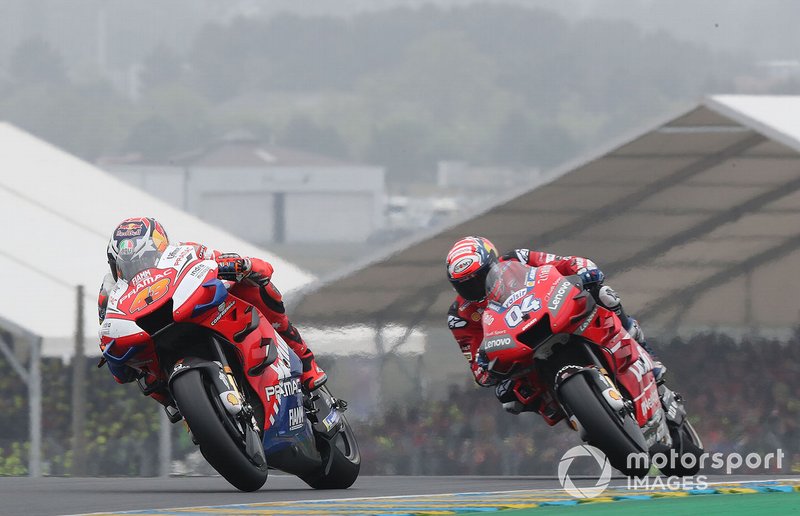