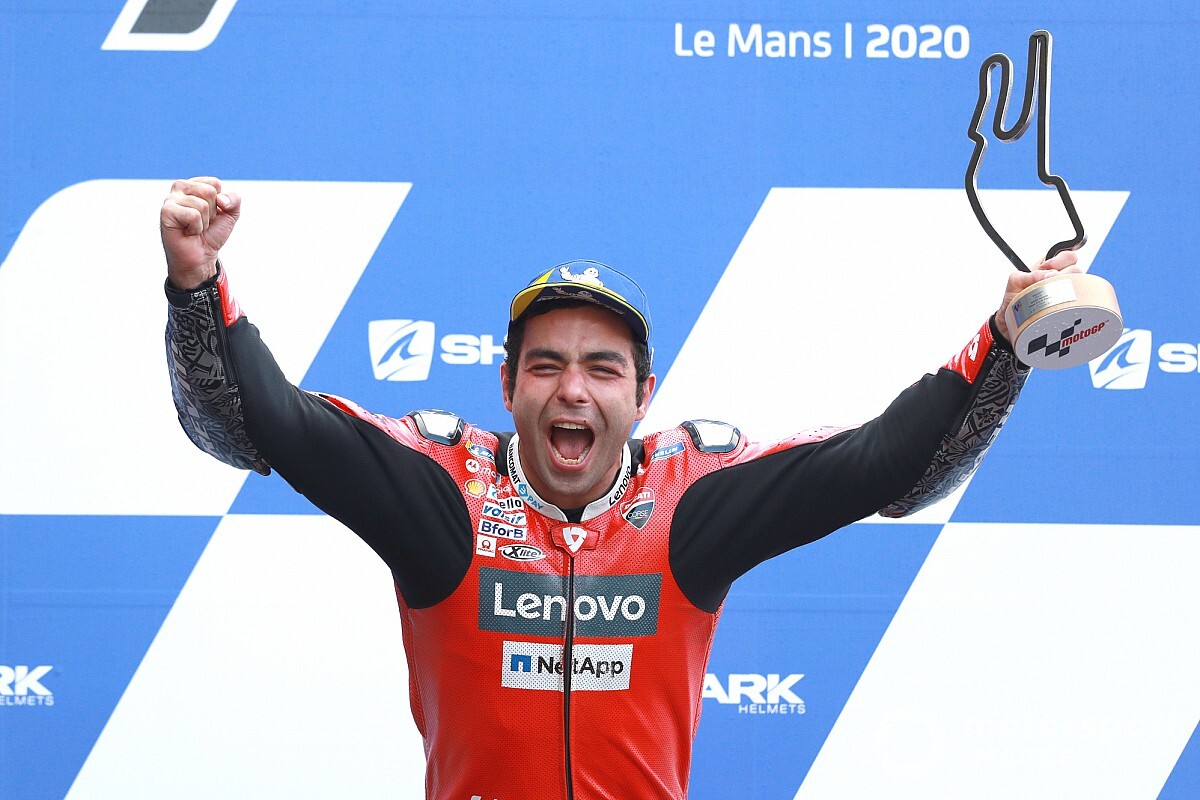 A heavy downpour just moments before the race was due to get underway forced a brief delay, with the race soon declared wet for the first time since the 2018 Valencia GP.

LCR Honda’s Cal Crutchlow held the lead very briefly on the run up the hill to the Dunlop chicane off the line, but it was Pramac’s Jack Miller who grabbed the lead at Turn 3.

A crash for Valentino Rossi forced his Yamaha team-mate Maverick Vinales, Suzuki’s Mir and Aprilia’s Aleix Espargaro to take avoiding action through the chicane – dropping the former two out of the points.

Amid the chaos, Andrea Dovizioso and Petrucci on the factory Ducatis had moved in behind Miller, with poleman Quartararo fourth but soon to come under immense pressure from those behind him as he struggled on his Petronas Yamaha in his first wet MotoGP race.

Petrucci found a way through on Miller at the Blue Esses towards the end of the first lap, with Dovizioso quickly following him through.

The leading Ducati trio quickly built up a buffer to the chasing pack, which was soon headed by Alex Rins on the Suzuki, who worked his way up to fourth from 16th on the grid by lap four once his medium rain tyres were up to temperature.

Rins then set about chasing down the Ducatis, and by lap 11 was under a second behind Miller.

The Suzuki finally found a way through on Miller at on lap 15 at Turn 3, though was re-passed at Garage Vert just a moment later.

On lap 18, Dovizioso made a successful move for the lead on Petrucci on the run through the first corner and would resist a counterattack at Garage Vert.

The two Ducati’s exited the double right-hander side-by-side and touched at the following corner, while Rins launched up the inside of Dovizioso to take second behind Petrucci.

Miller’s charge would come to a cruel end just a lap late when his Pramac GP20 expired on the following lap, while Rins would crash out of second at Turn 3 on the next tour.

This gave Petrucci a buffer of 2.7 seconds over Dovizioso, though his team-mate quickly wiped this gap out, while Marquez in his first wet race closed in.

Petrucci’s lead came down to 1.2s on lap 23, but Dovizioso started to suffer from a lack of rear grip and was powerless to stop Marquez coming through at La Chapelle next time around.

Petrucci’s lead remain intact across the final lap, and the Ducati rider made it across the line for his second MotoGP victory, making him the seventh different victory this season.

Rookie Marquez gave Honda its first podium in 2020 having started from 18th in second, while Pol Espargaro completed the rostrum on the KTM after pipping Dovizioso late on.

Dovizioso managed to hold fourth despite his fading rear tyre, with Johann Zarco fifth on the Avintia Ducati on home soil ahead of Tech 3’s Miguel Oliveira.

Takaaki Nakagami was seventh on the LCR Honda head of factory RC213V rider Stefan Bradl, while Quartararo fended off Vinales and Mir on the last lap to salvage ninth.

Quartararo still extends his championship lead to 10 points of Mir, with Dovizioso 18 points adrift and one clear of Vinales.

Brad Binder’s first wet race on the KTM ended in 12th, while Francesco Bagnaia was unable to rival his Ducati stablemates’ form in 13th on his Pramac GP20. Aleix Espargaro and Tech 3’s Iker Lecuona scored the final points.

Petronas man Franco Morbidelli crashed out after dropping to the rear of the field early on, while there were falls for Crutchlow, Aprilia’s Bradley Smith and Avintia’s Tito Rabat.

Podium in wet race "doesn't mean that much" – Marquez