Petrucci: Last 10 laps in Austria were a "nightmare" 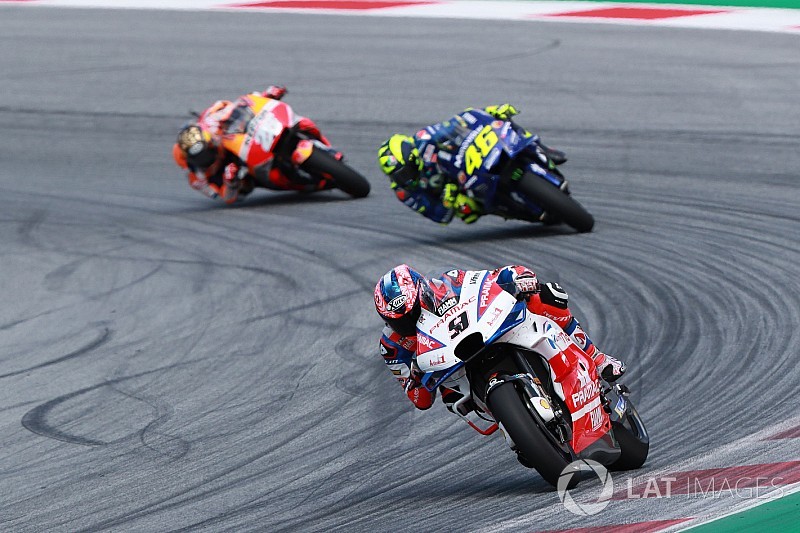 Pramac Ducati MotoGP rider Danilo Petrucci says the final 10 laps of his Austrian Grand Prix were a “nightmare” as he struggled with fuel and tyre consumption.

Petrucci ended the Red Bull Ring race fifth, 13 seconds down on race-winning factory Ducati rider Jorge Lorenzo, having spent much of the race vying with Cal Crutchlow’s LCR Honda to be best privateer.

However, the Italian was forced to back off in the latter stages, eventually finishing four seconds down on Crutchlow and just nine tenths ahead of a resurgent Valentino Rossi.

Although satisfied to have surpassed Johann Zarco to become the top independent rider in the championship, Petrucci admitted his finishing position was “lucky”, such were his late issues.

“The last 10 laps were a nightmare,” recounted the Italian. “Fortunately I created some gap some gap with [Alex] Rins, Rossi started so far [back], I was lucky I was in front because in the last 10 laps I struggled a lot.

“I suffered [on] all the things, but most of all was the tyre consumption on the right side.

“Rossi gained almost one second per lap in the last five laps, with another lap I don’t know how we would have finished.

“This is my least favourite track. Twelve kilos more [weight] on all the braking areas is so high, I stressed a lot the front tyre, the rear tyre overheated.

“We struggled with fuel consumption, I had to race with low power, this didn’t help me on these long straights.

“Anyway, yesterday I would have signed for a top five, I reached it, and I am quite satisfied with the work we are doing with my team.”

Petrucci raced with medium tyres front and rear, an identical strategy to Ducati stablemate Andrea Dovizioso, but Lorenzo managed to win the race by using soft tyres on his Ducati.

Asked whether he made the right tyre choice, Petrucci replied: “I don’t know sincerely. I am curious like you because we don’t have a lot of data from this race.

“I saw Jorge [was] very good on traction, he is always caring a lot with the throttle so he’s very strong in that part, I think ‘maybe I will try the soft’. But with my weight it’s always a problem to go softer.

“For sure the hard this time was not so useful, because we always seen Ducati with soft and Honda with hard. Difficult to understand, but for sure I have this doubt.”

Lorenzo will "lose out" at Honda, says Ducati

Vinales: 'It's impossible to enjoy riding when you're 12th'