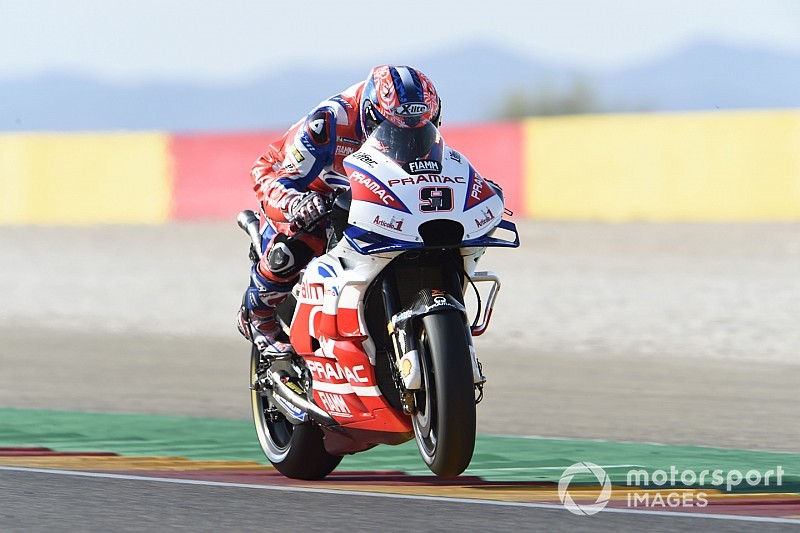 Pramac Ducati rider Danilo Petrucci admitted that his inability to replicate the recent successes of the factory riders in MotoGP has been "70 percent" down to his own riding style.

The factory Ducatis of Andrea Dovizioso and Jorge Lorenzo have been in a dominant form of late as the duo won three races in a row and Marc Marquez could only narrowly deny them a fourth successive win at Aragon.

However, Petrucci, also riding the Ducati GP18 but for satellite team Pramac, has been unable to run with the works bikes, his best result from the past four races a fifth place at the Red Bull Ring.

Petrucci, who will replace Lorenzo at the factory team next year, said that his biggest weakness is tyre management in the second half of races, caused by having too much temperature in his tyres.

Tyre wear has been traditionally an issue for Petrucci in the past due to his weight, but the 27-year-old said that was only "30 percent" of the problem as the bigger issue is his riding style.

"During these two weeks, Ducati work for me to understand which is the difference between me and Dovi and Jorge who are faster than me, especially in the second half of the race," said Petrucci.

"[It's] because I have the tyre very, very hot. Yes, there is a weight difference between me and the two other riders but is not all the weight.

"They said 70% is the riding style, 30% is the weight. For sure the weight doesn't help you but they watch the data all the race in Aragon and they saw small differences, especially when the tyre became hotter.

"I have to work on this part and I have to use this race [in Buriram] to understand how to ride the bike and not overheat the tyre.

"Is not easy because I have to change many many things from the braking and it is not a work that I can do in one race."

Petrucci explained that he will need to change several aspects of his riding, but mainly focus on braking as he tends to enter the corners too fast.

"The main problem is that I go into the corner with too much speed especially the last part," said Petrucci, who added that his tyres had over "20 percent" more temperature than Dovizioso and Lorenzo.

"The problem is, the turn is the same for everyone and I go always a little bit wide and on acceleration I am wider on the line.

"This is good for one lap, good for five laps but for 25 laps, not so much. In few words, I have to stop better the bike.

"And I have to change even the line, the way I pick up the bike and the way I open the throttle.

"I already watch Dovizioso on track during Aragon and we saw this kind of thing, when I was following him, I was rushing to him in braking but if I brake late like him, for sure I hit him."