Spaniard leads countryman Lorenzo on day one in Japan

Today was a perfect day for practice. We were able to do the job we wanted.

Rookie Stefan Bradl continues to impress on the LCR Honda and ended the day in 4th with a best lap of 1m 46.428s while Valentino Rossi (Ducati Racing) looks to have some new-found confidence in the GP12 mainly due to a new chassis and the Italian finished day one in 5th place on the timing sheets with a best time of 1m 46.687s. Ben Spies set the 6th fastest time of the day with a 1m 46.912s and one place ahead of current MotoGP Champion Casey Stoner who has made a marvelous recovery following a two race lay off with an injured leg and ankle to set a best lap time of 1m 46.978s, which was good enough for 7th.

Finishing the day in 8th was the San Carlo Honda Gresini of Alvaro Bautista with a best lap of 1m 46.983s with Cal Crutchlow in 9th place (1m 46.984s) while rounding of the top ten in the timings was the Ducati Racing GP12 of Nicky Hayden who set a best time of 1m 47.592s. Regular Yamaha test rider Katsuyuki Nakasuga set the 11th fastest time of 1m 47.801s for the Yamaha YSP Racing Team while Hector Barber and the Pramac Ducati team in 12th (1m 48.232s). The first CRT on the timing screens was that of Aleix Espargaro and the Power Electronics Aspar team with a best lap of 1m 48.470s that was good enough for 13th while the last of the prototypes was that of Karel Abraham and the Cardion AB Motoracing squad with a best lap of 1m 48.757s. Abraham had a slight crash early on this afternoon but was unhurt. 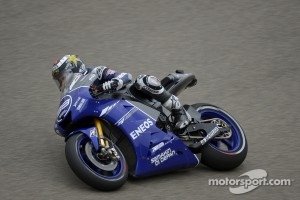 Frenchman Randy de Puniet also crashed today leaving the Power Electronics rider in 15th place with a best time of 1m 48.770s. Colin Edwards ended his first day in 16th on the NGM Forward Racing machine with a 1m 49.539s lap while James Ellison finished in 17th for the Paul Bird Motorsport team (1m 49.652s). Michele Pirro (San Carlo Honda Gresini) set the 18th best time today with a 1m 49.770s with Roberto Rolfo in 19th setting a 1m 50.292s lap and in 20th is the Avintia Blusens machine of Yonny Hernandez 1m 50.333s. The second of the Avintia Blusens riders, Iva Silva finished the day in 21st with a lap of 1m 50.924s and in 22nd place was Danilo Petrucci 1m 51.270s for the Came IodaRacing team.

Pedrosa was very happy with his performance on day one saying, “Today was a perfect day for practice. The track conditions were very good, the warm temperatures helped, as did the new surface, so we were able to do the job we wanted. The main target today was to test the tyres and we completed some good laps on both hard and soft compounds. The asphalt is new and the grip is quite good, so the lap times are pretty fast from the beginning. We also did some work on the suspension and the mapping to will keep improving on this tomorrow.”

Lorenzo led the earlier morning session and is confident about his chances in Sunday’s race. He said, “We started in a very good way here, much better than in Aragon where we had issues with the life of the rear tire. We have a very good pace and with a little change in the electronics were able to go a bit faster. We tried with the hard tire, for me it’s not better than the soft although we can go fast on it. For tomorrow I think the soft one will be better. The Hondas are very good here but our bike is also so I think we can fight with them for the victory.” 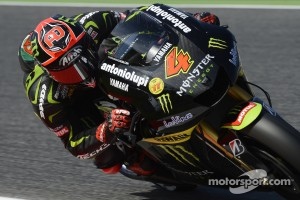 Dovizioso was very pleased with his pace today and found a number of settings he believes will help him stay with the top two riders in the championship. He said, “It has been a really good start to the weekend because I did my time with the hard tire and that looks like being a probable choice for the race. The good thing is I am very competitive already but I know we can improve on the last part of the entry to the corner. I don't feel comfortable in that area, but even if I don't feel 100% confident with the bike and ready to push as hard as I know I can, I am very close to the fastest two.

“I believe I will be able to follow Dani and Jorge on Sunday and that is basically my aim for the weekend. It will be difficult to fight with them for the victory but I am certainly looking to be battling for the podium again on a track that I really like,” Dovizioso added.