Dani Pedrosa secured a stylish, and vital, victory today at the Air Asia Grand Prix of Japan at the Twin Ring Motegi circuit much to the delight of Repsol Honda top brass who were present at Honda’s spiritual racing home. Pedrosa finished ahead of main championship rival Jorge Lorenzo (Yamaha Factory Racing) who stayed with his fellow countryman for most of the race but unable to maintain Pedrosa’s pace. Following Lorenzo into third place was Alvaro Bautista for the San Carlo Honda Gresini team.

It's a great feeling to win races and we are doing it now.

From the start it was clear that Pedrosa was not going to settle for anything less than a win as he and Lorenzo streaked away at the front with Ben Spies (Yamaha Factory Racing) also making a good start but bad luck stuck the American once again when he had a problem with his brakes, ran on and hit a barrier and he had to retire from the race but Spies appeared unhurt. Spies’ crash gave Lorenzo and Pedrosa a lot of breathing space and the Spaniards continued their duel with Lorenzo leading Pedrosa for the first 10 laps. Monster Yamaha Tech 3 rider Cal Crutchlow had a good start from the front row and after Spies crashed he was sitting in third place for the majority of the race.

The pivotal moment in the race was when Pedrosa moved passed Lorenzo moving into lap 12 and after this Pedrosa continued to build a gap on his rival and one that Lorenzo couldn’t pull back leaving Pedrosa to streak to the win much to the delight of the thousands of Honda fans and also the top Honda management. Lorenzo secured a vital second place and 20 championship points while Bautista made a tremendous effort to reduce the gap to Crutchlow in third and with 5 laps to go the Italian made a lunge up the inside of his British rival and took third place, his second podium of the year.

Finishing the race in 4th was Andrea Dovizioso on board his Monster Yamaha Tech 3 machine and this position was gifted to him following his teammate’s unfortunate retirement from the race after Crutchlow’s YZR-M1 ran out of fuel. Dovizioso finished ahead of Casey Stoner who looked strong early on in the race, finished in 5th after Bautista and Dovizioso got the better of him with most putting this down to Stoner not being fully fit following his two race absence due to his injured ankle. Sixth position went to rookie Stefan Bradl on the LCR Honda with the Ducati Racing pairing of Valentino Rossi and Nicky Hayden finishing in 7th and 8th respectively. The tope ten was rounded off by Katsuyuki Nakasuga for the Yamaha YSP Racing Team in 9th and Pramac Racing’s Hector Barbera in 10th. 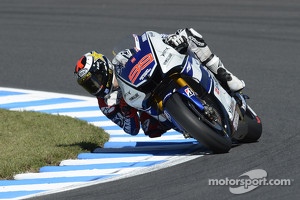 Cardion AB Motoracing’s Karel Abraham ended his race in 11th and just ahead of top CRT rider Aleix Espargaro for the Power Electronics Aspar team while teammate Randy De Puniet crashed out of the race. Colin Edwards had a good race on his NGM Forward Racing machine ending the day in 13th place while James Ellison finished in 14th for the Paul Bird Motorsport team. San Carlo Honda Gresini CRT rider Michele Pirro finished in 15th position ahead of Roberto Rolfo for the Speedmaster team.

Pedrosa was very happy with another win in the premier class and to reduce the points gap to main rival Lorenzo. Speaking after the race he said, “It was a hard race because the pace was very fast from the beginning. I tried to understand the bike, as yesterday we had a lot of chatter so I didn't know how it would be today. In the beginning it wasn't too bad but then it got a little worse during the race. I managed it as best I could and I stayed with Jorge, I was able to get a better line out of the corner and pass him and then I put in some good laps and controlled the gap.

Jorge tried to stay with me, but then decided to settle for the second place. We did what we needed to do and it's just a pity that there is no one else who can stay with us because every race I win, he's been second. But anyway, it's a great feeling to win races and we are doing it now. Thanks to Honda and the whole team, I'm really happy to win again here in Motegi!" Pedrosa added excitedly.

Lorenzo pushed to stay with Pedrosa but said that he had nothing left at the end to bridge the gap to the leader. He said, “I was completely at the maximum trying to stay with Dani but today we had such different performance on the straights and he was also riding really well. I tried to stay with him but it was impossible, maybe next time it will be different. For sure the Championship is closer now, but we are still very competitive and have the chance to win.” 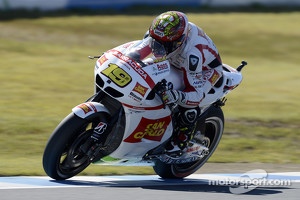 Bautista was delighted with his podium finish and was thrilled to secure it on the same weekend as when he signed a new contract with his san Carlo Honda Gresini Team. He said, “I am very happy today, I knew we could do well and fight for the podium because yesterday we had been shown to have a good race pace, I tried and I did it. I did not start very well and lost some positions but I quickly recovered. Then when I caught Crutchlow I saw that we were shooting at the same rate, and so I tried to keep a safe distance so as not to overheat the brakes, for five laps I pushed more and I attacked and I have to say that the battle with him was beautiful and I enjoyed it.

I am very happy for the guys in the team who have always worked a lot with Showa suspension to give me a bike with great performance, for the sponsors and the HRC that is giving us all the support and I hope to continue like this for the next races,” Bautista added.

MotoGP now moves to Malaysia for the Grand Prix of Malaysia at the Sepang International Circuit. Pedrosa sits in 2nd in the Championship on 282 points with Lorenzo now leading the championship by 28 points on 310.

Front row start for Pedrosa in Japan, Stoner in 7th