Repsol Honda rider Dani Pedrosa sealed victory at today’s Gran Premio Iveco de Aragón in devastating fashion in front of his home fans where he romped home ahead of his compatriot and main championship rival, Jorge Lorenzo (Yamaha Factory Racing) while Andrea Dovizioso took a dramatic last lap victory over his Monster Yamaha Tech 3 teammate Cal Crutchlow. The 23-lap race started under brilliant sunshine at the Motorland Aragon circuit and it was Lorenzo who took the holeshot ahead of Pedrosa and Yamaha Factory Racing teammate Ben Spies who comfortably settled into third place.

Thanks to all my team and to my fans and family for their support, this victory is for them all!

Crutchlow had a good start from third place and after being passed by Spies he was leading LCR Honda’s Stefan Bradl and Dovizioso early on. There was drama behind in the early fight for 7th when Ducati Racing’s Valentino Rossi nearly ran into substitute Repsol Honda rider Jonathan Rea and dropped to last position on only lap 2 while Rossi’s teammate Nicky Hayden then left to chase Rea. The CRT battle was being led by Power Electronics Aspar rider Aleix Espargaro ahead of teammate Randy De Puniet who had both passed Pramac Racing’s Hector Barbera early on.

The drama continued on only the second lap when Hayden had what looked to be a serious crash on board his Ducati GP12 when he went off track and hit a barrier head on catapulting the American rider into the air and onto the trackside road. Hayden was immediately attended to and miraculously he was confirmed as being unhurt later on when he was taken to the clinica mobile. Hayden’s crash left Rea to chase San Carlo Honda Gresini’s Alvaro Bautista in 6th position.

Spies was busy fighting to stay ahead of Crutchlow, Bradl and Dovizioso who were all close to each other and the critical moment came with only 5 laps gone when Spies went wide to let Bradl passed but the German rider wasn’t in front for long when he lost the front of his machine and crashed out of the race with Spies then promoted back to 3rd. There was also bad luck for David Salom and the Came IodaRacing team when he also retired early on. Meanwhile, Rossi was putting on a show from the back of the field where he was scything his way through the CRT field. 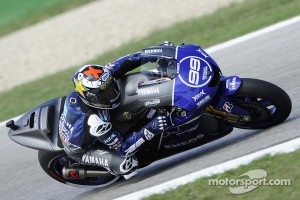 Lorenzo continued to lead Pedrosa up until the 7th lap when Pedrosa made his move on his RC213V that looked to have much more grip than Lorenzo’s machine. Within just one lap Pedrosa had increased his lead over Lorenzo by 1.5s while behind these two Spies was just about managing to stay ahead of the Monster Yamaha Tech 3 riders. Pedrosa continued to stretch his lead and after another couple of laps he had a 2.5s lead with Lorenzo nearly highsiding out of his second place position. The rest of the entertainment at the other end of the field was coming from Rossi who had his Ducati on rails and within 8 laps he was back up to 11th position.

The halfway stage of the race saw Pedrosa leading Lorenzo now by over 4.5s while behind these two, Spies continued to stay ahead of Crutchlow who was passed by teammate Dovizioso who then set off in his quest to grab another podium position. De Puniet was leading the CRT battle at this stage with Espargaro in close pursuit. Rossi continued to push passed the CRT riders and had reached his original starting position of 8th place moving into the second half of the race.

The fight for third place heated up in the final ten laps with Dovizioso timing his move passed Spies to perfection while Pedrosa continued to build up his lead over Lorenzo. Rossi continued to circulate in 8th and catching Rea in 7th place was too much for the Italian who looked to use up all his rear grip in his efforts to catch the Northern Irishman, however Rossi wasn’t content in 8th place and actually ran off track again but this time he managed to remain in 8th. Pedrosa was untouchable at the front and when he crossed the line he was over 6s ahead of Lorenzo. Dovizioso held onto third position fending off a strong attack from Crutchlow on the last few laps.

Pedrosa was delighted with his race win after crashing out last time out in Misano. He said, “It's been a tough weekend in general, with discussions about the last race with race direction and the crash in qualifying yesterday which created a lot of hard work for the mechanics. In the race I remained calm and was able to focus, Jorge began very fast in the early laps but I was able to stay with him and then after a few laps I saw I could increase the pace and I passed him and tried to find my own rhythm.

I was concentrating so hard that I almost forgot that it was a race, then I realised there were only 4 laps to go! I had a few issues with the clutch into the corners, shifting down, as I did yesterday, but overall the bike was working well so thanks to all my team for their hard work last night and to my fans and family for their support, this victory is for them all!” Pedrosa added. 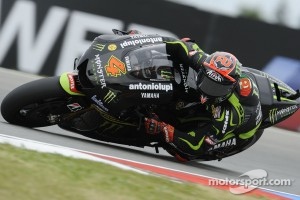 Thinking about the championship was at the front of Lorenzo’s mind as he spoke about the race. He said, “I was thinking to try for the win at the beginning of the race and if that was not possible then second place was the best possible result for the Championship. Dani had a better pace in the end, I was stronger at the start then little by little I was a bit slower, the tyres were slipping a lot and I couldn’t follow him. I nearly crashed in one corner and decided then to stay in second place and wait for the end of the race.”

Getting the best of his teammate for third place, Dovizioso said, “It was a very good race and I am very happy to be back on the podium. It has been a difficult weekend with the weather but the Monster Yamaha Tech 3 Team did a fantastic job and the bike was very strong in the race. It was a very strategic race for me because right from the start I was quite slow in a few corners so I had to work very hard to stay in front of Ben and Cal. I knew Cal would be pushing very hard at the end of the race because a few times we have battled together like this and I have beaten him, so I knew he would not be giving up without a fight.

He tried in the same place on the last two laps but at that point he couldn't stop the bike and I had a better exit speed to immediately take the third position back. And I know I am very strong on the brakes, so going to the last corner I was confident I could keep him behind me. It is great to be back on the podium, so I want to say a big thanks to my crew for doing such a wonderful job again.” Dovizioso happily added.

MotoGP now moves to the Far East on 14th October for the AirAsia Grand Prix of Japan at the Twin Ring Motegi circuit with Lorenzo leading Pedrosa by 33 points.

Barberà ends up 12th at the Gran Premio de Aragon