Pedrosa had pace to win despite "massive disadvantage"

Honda MotoGP rider Dani Pedrosa says he had the pace to win the Thailand Grand Prix, but feels his race was compromised by a “massive disadvantage” relating to tyre choice.

Pedrosa, who will retire from the championship at the end of the year, is enduring his worst season in grand prix racing as he is yet to finish higher than fifth.

After being demoted to 11th in the opening lap melees, the Spaniard had charged through the pack to arrive at the back of four-bike lead group of Andrea Dovizioso, teammate Marc Marquez and the Yamahas of Valentino Rossi and Maverick Vinales.

But his challenge didn't last as he folded the front at the Turn 5 left-hander with seven laps to go, exiting the race.

“I had the feeling there was potential for win, obviously, regarding the pace,” Pedrosa said after the race.

“But then obviously when you arrive to the group, then you have to fight, you have to find the way how to pass, and make things work.

“I don't know how it would be at the end, in the group, fighting, but obviously, regarding the pace it [a win] was possible.”

A high rate of tyre wear meant that every rider but Aprilia's Aleix Espargaro began the race on the hard rear.

Pedrosa insisted he had no choice but to use the hard Michelin compound, but felt this disadvantaged him in a major way as he struggled to warm up the tyre.

He reckoned the initial tyre setback had a big effect on his race and ultimately contributed to his crash.

“This was the main problem, we were forced to use the hard rear and I had a huge, massive disadvantage on that, because for me to warm up this tyre was almost impossible,” he said.

“It took me five laps, and I had to do two extra [warm-up] laps before the grid to clean the tyre. Even then, when I checked [my rivals], they were with a lot more grip in that moment. It was a massive disadvantage.

“Then I had a problem on the clutch in the start, and this doesn't allow me to make a good start, then in the first corner I wasn't that strong and [Jack] Miller came in, released the brakes and took us both out [wide].

“So this makes us to lose even more positions later in the straight because we didn't make a good first corner.

“I lost so many seconds, maybe four seconds I lost in the couple of laps, but then I was back to them [the leaders] at one second before the crash, so this is the positive part.

“Unfortunately end up in a crash, and I think it would be a lot different if I could start from the front.

“But the disadvantage was massive today on the rear tyre at the beginning and that's the problem, because nobody cares.”

Explaining the crash itself, Pedrosa said: “I was just improving my laptimes, I was lapping fast and getting closer every time, just went in and tucked the front on the bump.

“The fork did a strange movement with the bump, [I] lost the grip there and the front.” 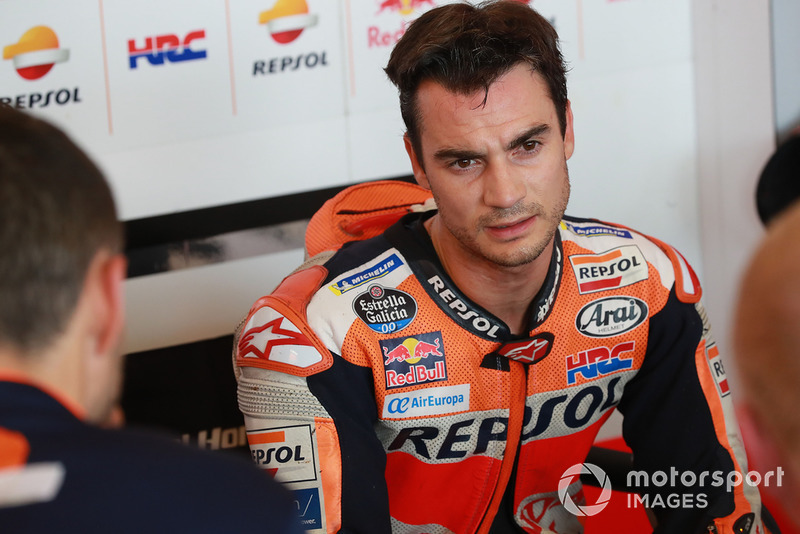