On the anniversary of his untimely death in 2017, Motorsport.com sat down with two former teammates - Dani Pedrosa and Michael van der Mark - to remember 2006 MotoGP world champion Nicky Hayden and the qualities which made him a motorsport hero

The high-pressure nature of professional sport and the personal sacrifices that must be made to become elite often make sportsmen and women polarising characters. It seems that fact is only heightened in motorsport. But, very occasionally, one comes along who totally bucks the trend, who is universally appreciated.

One of five born into the Hayden family in Owensboro, Kentucky, on 30 July 1981, racing flowed through Nicky's veins. Just like so many American bike racing heroes before him, Hayden cut his teeth - and proved successful - on the dirt track scene. He blazed a trail through the AMA series, winning the Supersport championship in 1999 and clinching the Superbike title in 2002, becoming the youngest winner of the series.

His exploits were enough to capture Honda's attention, and he moved to MotoGP in 2003 as teammate to Valentino Rossi. It would be two years before he tallied up his first win, doing so at Laguna Seca in 2005, but the following season would prove to be the 'Kentucky Kid's' breakout campaign.

In MotoGP's most dramatic championship tussle, a consistent Hayden - who only won twice compared to Rossi's five, but retired only once in a crash-strewn season for the Italian, now at Yamaha - beat Rossi by five points in a Valencia finale in which his rival crashed. The pictures of Hayden, his face dripping with tears, as he brandishes the Star Spangled Banner on his cool-down lap are some of motorcycling's most memorable of modern times. 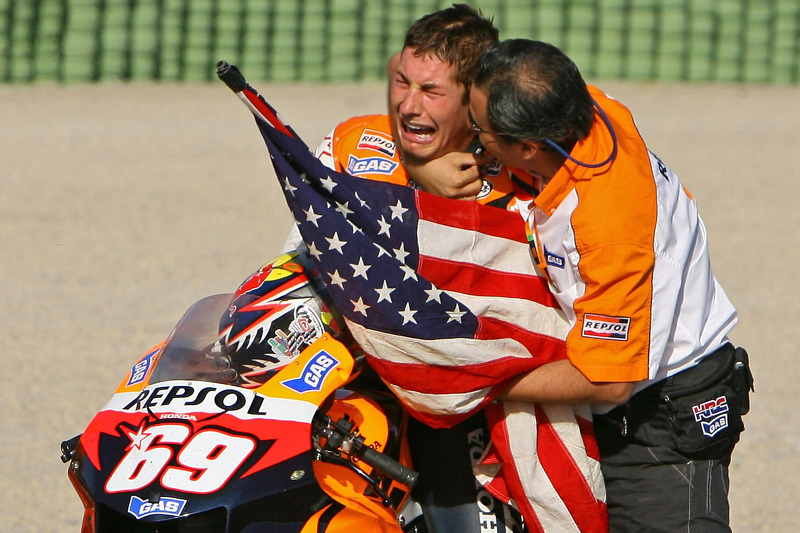 It was the realisation of a lifelong dream - one which appeared to have ended in an Estoril gravel trap a week earlier after Honda teammate Dani Pedrosa crashed and took the American with him.

A total accident in the heat of battle, and one the Spanish rookie was unfairly vilified for in the press, Hayden's furious immediate reaction may well have been the defining image of that 2006 season had Rossi go onto win the title. Hayden's outburst was uncharacteristic, but his reaction later wasn't.

"Sure, he felt very bad because all his hopes were gone," Pedrosa tells Motorsport.com when asked about his memories of that day. "But I just went to his motorhome, I apologised to him. I just tried to explain [what happened], it was not intentional of course. He actually took it well.

"He was crying, but he took it well. He was crying out of anger, out of not being able to change the situation. But I told him 'OK, this is what happened and I will try to help you at the next round'."

Hayden was Pedrosa's first teammate in MotoGP, and the Spaniard was tipped for greatness after three straight seasons of title glory in the 125cc and 250cc classes. Typically, this is a recipe for high tensions and falling outs between teammates. Indeed, Pedrosa beat Hayden to second in the 2006 Jerez season-opener and was the first of the pair to win a race that season.

But never did things descend to Rossi/Jorge Lorenzo levels of tensions, where that pairing had a wall erected in their Yamaha garage to stop set-up secrets spilling out. As Pedrosa explains, that was in equal parts down to Hayden's nature as a person and the way he operated as a racer.

"Always we got along well," the 31-time MotoGP race winner says. "Aside from the [fact the] competition was extremely strong between us, [the rivalry was] nice, never any bad words or anything.

"But the heart was like 'no, no, I don't want Dani to beat me', and in the end I had to beat Nicky. So I could feel that in every test we did, and anytime I was finishing the first day in front of him, the first thing he would do in the second day of testing, the first outing, he would go out and smash my best lap from the day before. So, I could feel this tension between us throughout 2006, and I think that also helped him a lot to achieve the championship." 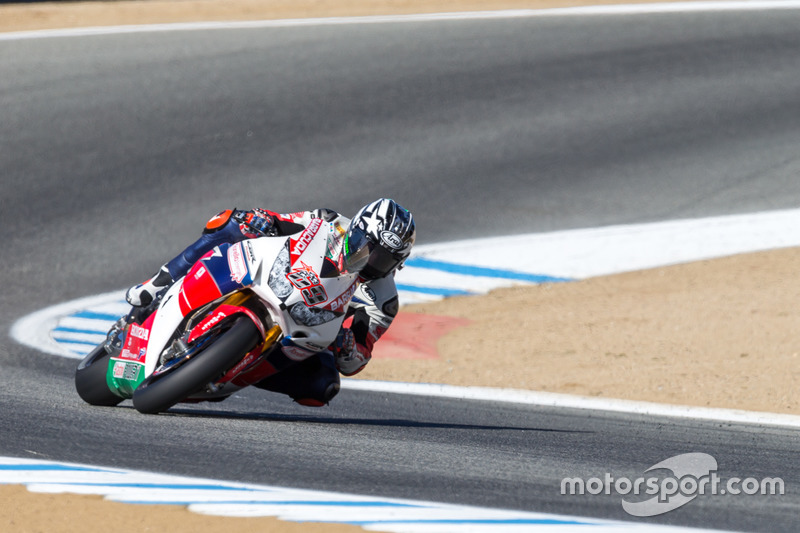 This was a trait Michael van der Mark, Hayden's first teammate in World Superbikes at the Ten Kate Honda squad in 2016 and fan of the American's growing up (van der Mark raced with Hayden's famous 69 in his early career), noticed.

"I remember one weekend in Misano, I was quite strong and in the practice Nicky wasn't even close to my laptime," Dutchman van der Mark tells Motorsport.com. "But he was working on sectors, he was improving every sector and then the last few minutes he put it all together and he was in front of me. So, the way he was working was really impressive."

Hayden wouldn't win again in MotoGP following 2006. Honda struggled in the early years of the 800cc bikes upon the formula switch for 2007, and Hayden's move to the works Ducati squad in 2009 on the difficult Desmosedici yielded only sparse podium visits between then and 2013.

His final two years in MotoGP were spent on the uncompetitive Aspar-run Honda RCV1000R and RC213V-RS Open class machines, while he also battled a nasty right wrist injury.

Retiring from MotoGP at the of 2015, Hayden had nothing left to prove. But his passion for motorsport and his belief of still being able to be competitive on the right machinery led him to WSBK on the Ten Kate-run CBR1000RR.

Solid in the early part of the season, Hayden backed up his belief in himself at a wet Sepang. The second race of the Malaysian WSBK round, Hayden - determined to bag a good result for his ill father and biggest supporter Earl - got his Honda to the chequered flag 1.2 seconds clear of the field to claim his first win in a decade. The outpouring of emotion was exactly what you'd expect from Hayden, as was his reaction once the adrenaline had subsided.

"It was a bit strange weekend," van der Mark recalls. "It was a rain race and I remember I struggled quite a lot when the track started to get dry, and he was just pulling away from me. So it was really frustrating for me, but it was great to see him on top of the podium - even though I wanted to be there. I think it was a big motivation for the whole team.

"But Nicky was Nicky, he just stayed calm and said 'yeah, it was a wet race and could have been anyone' and he said had it been a couple of laps more... he stayed so calm. Of course, he was happy, but he was also down to Earth." 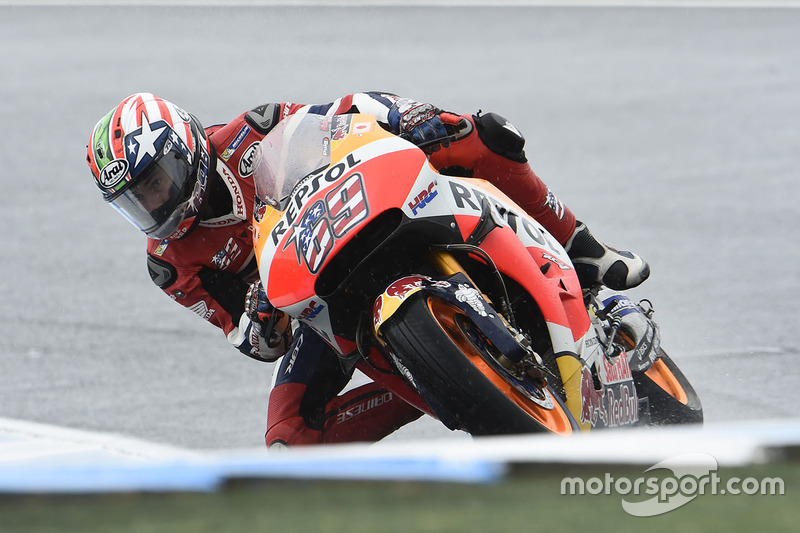 Hayden would finish on the podium twice more that year - once at home at Laguna Seca, and at the following round at the Lausitzring. He made two MotoGP appearances as an injury replacement later in the season too, at Aragon at Marc VDS, and donning the Repsol colours one more time at Phillip Island to fill in for Pedrosa. He scored a point at Aragon, and was on course for a handful more in Australia before he was taken down. No matter, he proved he could still cut it at the elite level.

On 17 May 2017, Hayden was struck by a speeding car while out riding his bicycle in Italy. He succumbed to his injuries five days later, his tragic passing cutting the motorcycle racing world deep. Dorna Sports, MotoGP's promoters, retired Hayden's 69 race number a year later, while motorcycles, leathers and helmets across the world's paddocks continue to carry the #69 in tribute.

The death of someone always tends to elevate them into a kind of faux legend, with people who paid very little attention beforehand all of a sudden becoming devout fans. That's never been the case with Hayden. Up and down bike racing paddocks, you'd struggle to find anyone with a bad word to say about him. The same is true today, and that's because you'd have struggled to hear him speak a bad word about anyone.

Prior to leaving MotoGP in 2015, Dorna made Hayden an official MotoGP legend. There are a lot of one-time and non-champions in that list that really probably shouldn't be considering some of the genuine legends they stand alongside. Hayden is the exception, though. Not only was he a brilliant rider and one of the most determined, but he was a brilliant human being.

It's this "special" - and rare - combination which made him one of motorsport's true greats.

"He was one of the strongest competitors when you fought, when you get to compete for the fastest lap time, for position, and he didn't want to give up any bit of anything," Pedrosa fondly recalls.

"He was always trying to be competitive to you. But at the same time, he never had a bad word and he could be so competitive without it becoming personal with him.

"But, at the same time, it's difficult to guess from the outside because when that thing happened in Estoril, or one week later in Valencia, you could see he was emotional. He was crying both times, and this meant that for him it was so important. That's why I think it's a special combination, being so competitive but not having a problem with the rivals or press or whatever." 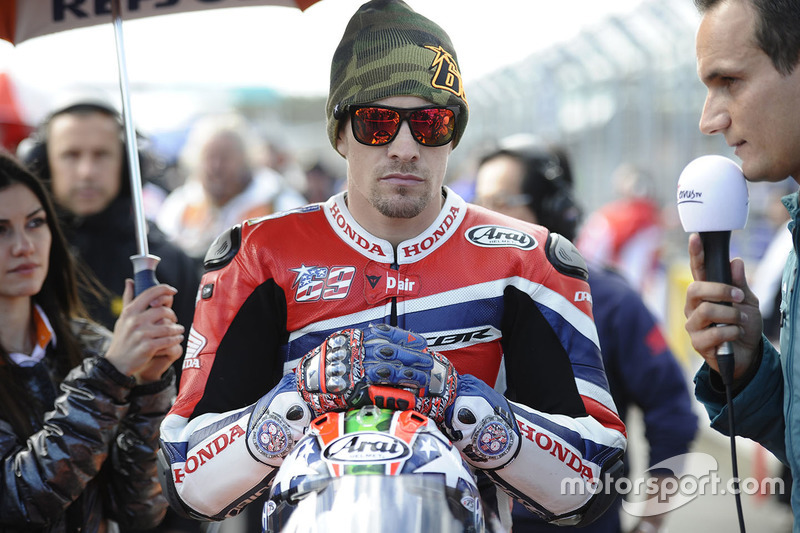