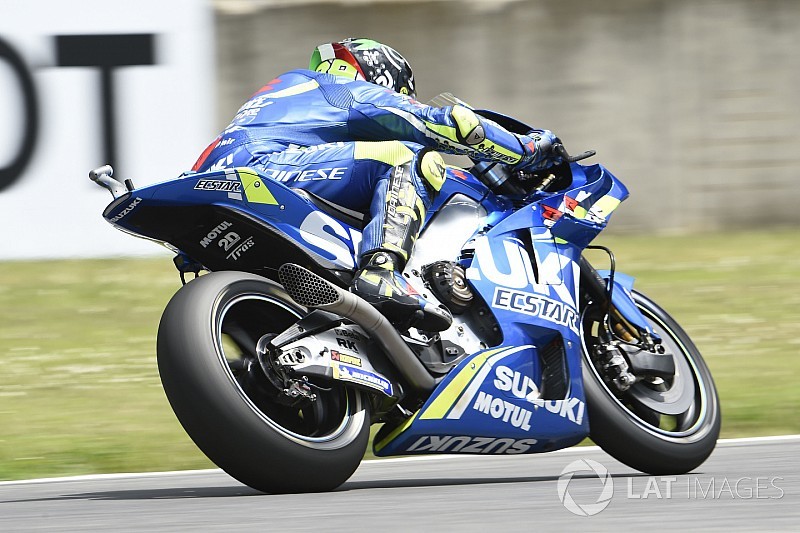 Suzuki MotoGP rider Andrea Iannone set the pace in the Sunday warm-up session ahead of the Italian Grand Prix at Mugello.

In seeing off reigning champion Marc Marquez, Iannone topped his fourth practice session of the Mugello weekend, his fastest effort coming on lap nine of 11.

Pramac Ducati's Jack Miller, his bike sporting the team's one-off Lamborghini livery on Italian GP race day, took an early lead by following the Honda of Marquez and firing in a 1m48.329s lap.

But Marquez, unusually running a hard rear tyre, responded the next lap around, lowering the benchmark to a 1m47.655s, with Ducati's Jorge Lorenzo slotting in a close second.

Pramac's Danilo Petrucci then narrowly surpassed Marquez with his effort, but his lead lasted mere moments, as the works Ducati of Andrea Dovizioso used his tow to post a 1m47.551s.

As the 20-minute session entered its final stretch, Iannone took over out front on a 1m47.416s.

Marquez soon shaved off a tenth from the Italian's effort, only for Iannone to edge ahead once more, his 1m47.080s with two minutes to go ensuring he would end the session quickest.

Marquez remained second, a quarter of a second off, ahead of Dovizioso and the leading Yamaha of Maverick Vinales.

Petrucci led Lorenzo by half a tenth in fifth, with pole-sitter Valentino Rossi taking seventh place and Dani Pedrosa, who qualified a career-worst 20th on Saturday, ending up eighth.

The top 10 was rounded out by the Aprilia's Aleix Espargaro and Miller.

Iannone's teammate Alex Rins struggled in 17th place, while Johann Zarco was a further spot down, more than half a second adrift of fellow Tech 3 Yamaha rider Hafizh Syahrin.

Analysis: The other Italian who could spoil Rossi's party

Live: Follow the Mugello MotoGP race as it happens