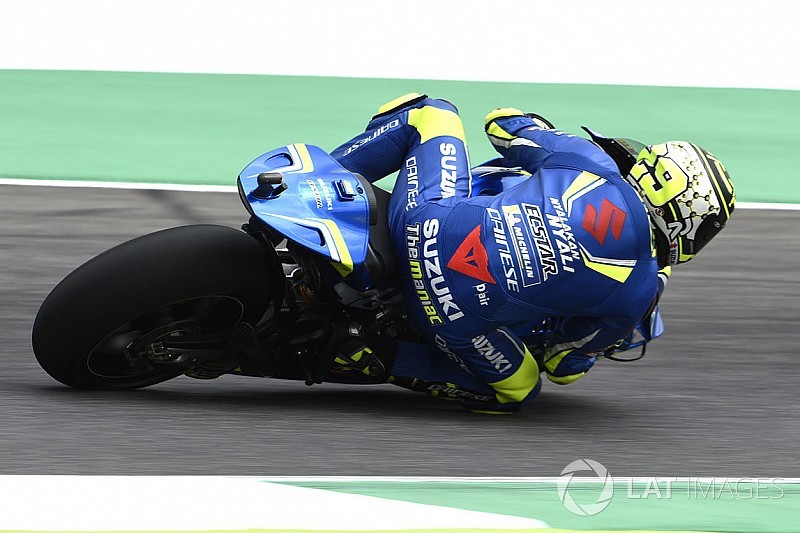 Suzuki rider Andrea Iannone continued his strong Mugello MotoGP form by topping second practice for the Italian Grand Prix, which was interrupted by a major crash for Michele Pirro.

The session was suspended with 29 minutes left on the clock when Ducati wildcard Pirro was launched off his bike on the downhill approach to the first corner, San Donato, at terrifying speed.

A replay of the incident showed the front wheel of the Desmosedici locking as the rear of the bike went up in the air, before suddenly regaining grip and throwing Pirro high into the air.

Pirro lost consciousness as he hit the ground, but was conscious again by the time he was taken to the medical centre by ambulance. He was subsequently transported to hospital by helicopter.

After a pause of some 20 minutes, the session was resumed, only to then be halted again when Andrea Dovizioso's engine blew at San Donato, leaving a trail of oil on track and causing the Ducati to catch fire.

Moments before, FP1 pacesetter Iannone had improved to a best time of 1m47.274s, and shortly after the second stoppage Honda man Marc Marquez moved to the top on a 1m47.218s, recovering from a minor low-side crash at Turn 4 between the two red flags.

That stood as the quickest time until the final three minutes, when Yamaha's Maverick Vinales posted a 1m47.122s, but that was beaten by 0.387s in the dying moments by Iannone's 1m46.735s effort.

Home hero Valentino Rossi was seventh-fastest on the second works Yamaha ahead of his mentee Franco Morbidelli (Marc VDS Honda), who ran as high as third before dropping down late on.

The only two GP18 Ducati riders to enjoy a clean session, Danilo Petrucci and Jorge Lorenzo, completed the top 10 ahead of another Honda rookie, Takaaki Nakagami (LCR).

Dovizioso was classified 12th after his blow-up, followed by the second Honda of Dani Pedrosa, while Iannone's Suzuki teammate Alex Rins was a lowly 15th, 1.261s off the pace.

Aleix Espargaro was the lead Aprilia rider in 16th after a late crash at San Donato, while Thomas Luthi suffered his second fall in as many sessions on the second Marc VDS Honda on his way to 23rd.