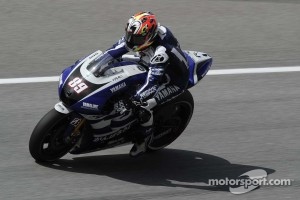 The Grand Prix of Valencia got underway today in difficult track conditions. The morning practice was run on a partly damp but drying circuit and the afternoon session was fully wet. Yamaha Factory rider Ben Spies took his first ride this morning since withdrawing from the Malaysian Grand Prix, gradually building up speed to finish in sixth, 0.7 seconds from first in the difficult conditions. The afternoon session saw the Texan crash out after a small mistake braking into turn one, crossing the white paint and losing grip on the slippery surface. Spies escape relatively unscathed but sore and unable to complete the session, wrapping up in 14th place.

Jorge Lorenzo’s replacement rider Katsuyuki Nakasuga was fully committed to the challenge of learning the Valencia circuit in today’s treacherous weather conditions. Nakasuga-san gradually built up confidence over the day as his circuit knowledge increased, moving from last place in the morning practice to 11th in the second session.

“I’m a little beat up but that’s normal after a crash. I got a little wide over the white line and hit a puddle and hydroplaned the front, lost it and went down. The bike was starting to feel pretty good and we were getting up to speed. It’s not the best way to come back, I’m not really happy about it but we’ll look forward to tomorrow and make it better. We made a change at the beginning of the second session which was bad, then went back to the settings from the morning and were making progress so we’ll continue with that set up in final practice.”

“This is my first time at this track and it was pretty difficult at the beginning to learn the way. I’m more comfortable now as I can remember the layout. I would prefer a dry track as I think it’s very easy to crash here in the wet. On Sunday I believe I can challenge for a good position, this is my target.”

Wilco Zeelenberg - Yamaha Factory Racing Team Manager
“A rainy first day in Valencia. We were afraid because it can be very slippery and Nakasuga-san has never ridden here before. He did quite well in the end, step by step he improved and quickly understood the track conditions. The weather actually gave him a little extra time to slowly learn the track and build up pace. We are quite satisfied with the set up so far and also his performance. We’re not sure what the conditions will be like tomorrow but we believe he still has room to improve. A tough day for Ben, hitting the white line is bad under these conditions but thankfully the crash was not so serious and he is ok for tomorrow.”

Massimo Meregalli - Yamaha Factory Racing Team Director
“Unfortunately Ben crashed today and hit his shoulder on the ground. For sure this isn’t going to help his physical condition over the weekend as he’s pretty sore. Hopefully he can manage the pain and keep pushing to deliver as strong results as possible. Nakasuga-san did a good job today for his first time here in wet conditions. By Sunday he should be used to the track so we’ll see what he can do.”