The 2010 MotoGP champion Jorge Lorenzo was injured during warm-up for the Australian GP last Sunday. The Spaniard high-sided his YZR-M1 at the exit of Turn 12 on the Phillip Island circuit and damaged two fingers on his left hand. He had to withdraw before the race stared. Today, the Yamaha Factory Team named test rider, Katsuyuki Nakasuga, for the Malaysian GP this coming weekend.

Lorenzo’s surgery included per the Yamaha press release yesterday: Debride and reconstruct left ring and middle fingers. The surgery was successful and he is at home in Barcelona but Lorenzo will be sidelined from competition until the medical team gives the green light.

Nakasuga from Japan will ride the No. 1 bike at the Sepang circuit. At the age of 30, he will make his debut in the premier series. Nakasuga’s knowledge of the Yamaha and the Bridgestone tires will aid him in his efforts this weekend.

While unknown to those who follow MotoGP, the Japanese rider competes in the All Japan Road Racing championship and currently sits in third place in the points this year. In 2008, he landed the series JSB1000 class championship and followed that feat up by taking the title again the next year. 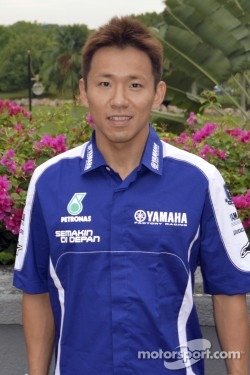 Katsuyuki Nakasuga will replace Jorge Lorenzo for the Malaysian GP

Nakasuga enjoys his career and earlier this year, he was able to get permission from his team, YSP Racing, and Yamaha to compete in the Suzuka 8-hour Endurance Road Race as one of the riders for the YART team. He was not a newcomer to the endurance race and in 2008, he and teammate Yuji Sato finished fifth.

“I asked Yamaha to consider whether or not we should enter the Suzuka 8-hour at a time like this but it was apparently a hard decision to make,” said Nakasuga. “So, I was very happy when MONSTER YAMAHA – YART made me an offer to ride in the Suzuka 8-hour with a Japanese rider on an YZF-R1 machine bearing a “Gambaro Nippon” (With You Japan) sticker.

“I immediately answered that I would be glad to. I love motorcycles and I love racing, so I would be honored if the sight of me racing in the tough Suzuka 8-hour could inspire and give courage to people in the areas of Japan that have suffered in the recent disaster” he added. Unfortunately even though he and his teammates started second on the grid, they did not finish the event.

The final MotoGP race will be held in Valencia on November 6th. Prior to the event, the decision will be made if Lorenzo can return to close out the season.