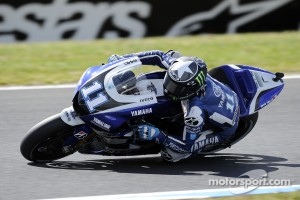 Yamaha Factory Racing have arrived in Malaysia this week to prepare for the final fly away race of the 2011 season at the Sepang circuit. Jorge Lorenzo will not ride at this weekend’s Grand Prix following a crash in warm up prior to the Grand Prix of Australia last week at Phillip Island. As a result Japanese test rider and All Japan Superbike competitor Katsuyuki Nakasuga will replace him for the race and subsequent 1000cc test on Monday. Lorenzo’s Championship points tally ensures he retains second place in the standings for 2011 despite not riding this weekend.

Ben Spies arrives in Malaysia recovering from his qualifying crash in Phillip Island which also ruled him out for the subsequent race. Spies has been declared fit to race this weekend with no recurring concussion issues. He will experience some discomfort after suffering ripped soft tissue around the rib area in the crash. The Texan delivered strong results on his first Malaysian Grand Prix experience last year, starting from fourth on the grid and battling to keep the position just off the podium at the flag.

“I like Sepang,” said Ben Spies. “It’s a track we visit a lot because of the off-season testing so we know it quite well. Coming into the weekend I want to be able to put in a good result, especially for Yamaha Motor Indonesia, Semakin di Depan and Petronas which are our main sponsors. Unfortunately I’m definitely still recovering from Phillip Island, but I’m going to give it 100% as we always do. It’s frustrating but it’s been a bit of a year for bad luck. We’ll do the best with what we’ve got and see what we can achieve.”

“I am sorry for Jorge’s crash and feel bad for his injury,” commented Katsuyuki Nakasuga. “I am confident he will be back in action soon. Of course it is impossible to replace the 2010 World Champion but I will do my best to get a good result for Yamaha and the fans this weekend. This does not just mean a good position but actually also good feedback to help develop the new 1000cc machine for next year. Although next year’s YZR-M1 is very different, I will try to get good ideas for next year and the future. I am a little nervous as a Yamaha Factory rider but luckily Sepang is a track I know pretty well. It’s a ‘stop and go’ style track that I like very much. I will give 110percent of my efforts to help Yamaha Factory Racing and to deserve the role of replacing of Jorge Lorenzo”.

“Our targets need to be adjusted for this round,” said Team Manager Wilco Zeelenberg. “Normally it would be the podium but that’s not necessarily realistic for Sunday. We need to see how Nakasuga-san rides, we know his best lap time is 2’02.4 seconds here which is not so bad. This will be his first Grand Prix so it will be a new experience for him. There won’t be much grip to start with after the rain here so we hope he will stay steady and remember we have four practices to go. He has all the freedom to push the bike to the limit; we want him to be comfortable to race and not to treat the weekend as just a test.”

“It’s going to be a really strange weekend. We have to see how Ben’s physical condition is,” stated Team Director Massimo Meregalli. “Until he jumps on the bike we won’t know how fit he is. On Jorge’s side we have a different rider which is a big challenge both for Nakasuga-san and for the team. Fortunately he knows the circuit and the bike which is an advantage. He has respectable lap times here from the winter test so let’s see what happens.”