Grand Prix of Malaysia Gets Underway at Sepang 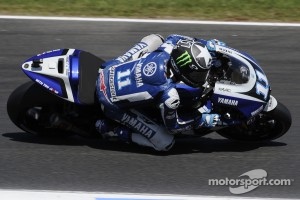 The Grand Prix of Malaysia began today at the Sepang circuit with the first free practice sessions of the weekend. Yamaha Factory Racing rider Ben Spies struggled to make improvements over the day, as injuries sustained from his crash in Australia last weekend continued to hamper his ability to push his YZR-M1. He completed the sessions in ninth place, just over two seconds from provisional pole.

Jorge Lorenzo’s replacement rider, Katsuyuki Nakasuga experienced the first Grand Prix sessions of his career, acquainting himself with Lorenzo’s bike and crew. A small crash in the morning warm up on the slippery Sepang circuit resulted in no injuries. An unfortunate second crash followed in the afternoon session, Nakasuga-san dropping to 18th place as he worked on understanding Lorenzo’s YZR-M1.

“It’s been a really rough day, coming back after the crash in Australia I’m pretty beat up and not able to ride the bike like I want to which is really showing. We’re doing the best we can but I feel like I’m struggling. We’ll try to get as many points as we can this weekend and keep a reign on fifth place in the Championship.”

“Today was my first day riding in the MotoGP Championship; I wanted to learn as much as I could during the sessions. Unfortunately I crashed this morning but thought that afterwards I would be able to relax a little once it was out of the way. Unfortunately again I crashed this afternoon and I’m not sure why. I’m feeling disappointed about it but will come back tomorrow and try to make sure we improve and have a day without crashing!”

Wilco Zeelenberg - Yamaha Factory Racing Team Manager
“A very difficult first day. It wasn’t the plan to crash in both practices but you can imagine how difficult it is to take on this challenge. Nakasuga-san put a lot of pressure on himself and maybe tried a little too hard too early. We need to help him find a rhythm and of course he is lacking a bit of speed compared to his competitors. We need to step up a bit tomorrow, not an easy task with the high level of competition on the track.”

Massimo Meregalli - Yamaha Factory Racing Team Director
“Ben is really suffering with his rib injury so it’s difficult to expect more from him, he is trying as hard as he can. I think that tomorrow he can maybe deliver some better laps. During qualifying you are more focused and can fight the pain for a couple of hot laps. The bike set up is not so bad, at this moment he can’t push hard enough to find any issues or use the full performance of the bike. Nakasuga-san had a difficult start; maybe he felt too much pressure for his first day in MotoGP. At the beginning of the season in testing he put together some great laps so I think he can improve tomorrow.”