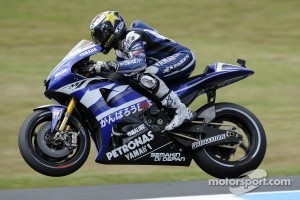 Yamaha Factory Racing rider Jorge Lorenzo will not participate in this weekend’s season finale at Valencia. Lorenzo continues to make good progress in recovery following plastic surgery to repair damage to the ring finger of his left hand sustained in Phillip Island three weeks ago. The Mallorcan’s injuries require further recovery time to allow him to ride at a competitive level.

Yamaha Factory Racing’s rider line up for the 1000cc test next week will be confirmed on Monday 7th November.

Yamaha Prepare for Season Finale at Valencia with Mixed Emotions

It is with mixed emotions that Yamaha Factory Racing arrives in Valencia this weekend for the final Grand Prix of the 2011 season. MotoGP’s tragic loss of rising star Marco Simoncelli in Sepang two weeks ago has left all with heavy hearts but determined to put on a good show in honour of their fallen competitor. The race is the last in Yamaha’s 50th anniversary of Grand Prix racing so the team will wear the red and white YZR-M1 WGP50th Anniversary Edition livery for the last time. 2010 World Champion Jorge Lorenzo continues to recover from surgery to his hand following his injury sustained in Australia. As a result he will not participate in this weekend’s Grand Prix and will be replaced by Japanese Yamaha test rider and All Japan Superbike competitor Katsuyuki Nakasuga. Yamaha Factory rider Ben Spies arrives for the last race of season committed to racing although still recovering from injuries sustained in Phillip Island. The Texan was also recovering from injury for the 2010 season finale at Valencia. Despite the pain he impressed, qualifying sixth and finishing just off the podium in fourth.

Ben Spies
“I can’t believe I won’t be battling Marco on the track this weekend, it’s an incredibly sad way to finish the season. I’m going to honour him in the best way I know how, on the track. As with last year I arrive in Valencia recovering from injuries, but will of course give 100% of my efforts into performing to the best of my ability.”

Katsuyuki Nakasuga
“It was a great honour to be chosen to ride for Jorge at Sepang and here at Valencia. Due to the tragic loss of Marco Simoncelli in Malaysia the race was cancelled. This weekend the track will be new for me but I will try as hard as I can to deliver good results.”

Wilco Zeelenberg
“This is the last round of the season, looking to the condition of the Championship and riders, and more significantly the tragedy in Sepang it’s good that we can now wrap it up. The feeling of the crew, like all those in the paddock has been affected deeply by what happened, we intend to honour Marco through our actions this weekend. Jorge continues to recover well from his surgery but unfortunately not quickly enough to ride to his potential this weekend. We look forward to having him with us on Saturday and Sunday to provide support for our replacement rider. The team are ready to give Nakasuga-san all the help he needs to get to grips with the Valencia circuit as quickly as possible.”

Massimo Meregalli
“This is going to be a difficult and challenging weekend for many reasons. Everyone is affected by the sad passing of Marco Simoncelli. This last race of the season would usually be marked by a party to celebrate our year but this is not now in keeping with the mood and feeling of the team. As such we will wrap up with our yearly technical presentation and a quiet team dinner. We have Nakasuga-san with us having to learn the Valencia circuit for the first time, and Ben still not 100% after his crash in Australia. Despite this we will give our maximum effort to mark the final race of our 50th anniversary year and to honour the memory of Marco Simoncelli.”