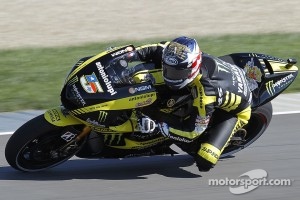 Colin Edwards flew the flag for Yamaha in tremendous style at the Sepang International Circuit today, the American showcasing his skill and vast experience to claim a fantastic fourth place on the grid for the 20-lap Malaysian Grand Prix.

A fastest lap of 2.02.010 was over 0.4s faster than his best practice pace on the Monster Yamaha Tech 3 YZR-M1 machine and secured the popular 37-year-old his best grid position since he qualified in fourth position at the Valencia round in 2008.

Fine-tuning the set-up he worked on during two winter test sessions at the long and technical Sepang circuit, Edwards was able to find crucial tenths with improved turning performance and better rear grip in searing hot conditions this afternoon.

Temperatures once again peaked at over 30 degrees but it was the punishing humidity that tested his physical stamina and concentration to the limit. It was a challenge Edwards rose to in brilliant fashion and he was only 0.344s from claiming a sensational front row, as he comfortably outpaced a host of riders on factory-supported machinery.

Today's qualifying session also had a positive outcome for hard-charging British rider Cal Crutchlow, who will start from his best grid position since the Laguna Seca round in late July.

The 25-year-old's hard work to improve rear grip on the slippery Sepang surface paid off handsomely and he was able to knock 1.2s off his best time from yesterday in this morning's third and final session.

A brilliant attack on Bridgestone's soft compound rear tyre then saw him lower his pace to a 2.02.756, which secured him a superb 10th place.

“I'm ecstatic with that result because to get a fourth place in any session against this level of competition is a pretty big achievement. I said yesterday that we rolled the bike out of the crate hot and today I felt even more confident. Usually I have a really good couple of tests in February and then come back for the race and I have an awful time. But with this year's chassis I'm really enjoying this track. We've barely moved away from the setting we left the second test with in February and the bike feels awesome. I'm pushing hard but I don't feel like I'm right on the limit like I have in some races and it relatively easy. I can ride smooth and the bike is turning really well. We'd like more traction, but in this heat and humidity the grip is always going to be the thing that's missing. I'm not far off the front row but I didn't leave anything out there. The lap I did my best time on, I took a couple of risks, so I couldn't have done any better. Fourth is my best qualifying result since Valencia in 2008. That seems like a long, long time ago, so it would be great to follow today up with a top five result tomorrow and send my awesome Monster Yamaha Tech 3 crew home happy."

“I'm much happier today and I want to say a big thanks to my Monster Yamaha Tech 3 crew because they've worked really hard to improve my feeling on the bike. We definitely made some progress today and the bike was turning better and the rear grip was improved as well. It is going to be a long and tough race in the heat but also the track isn't in fantastic condition, so we'll be sliding around a lot at the end. The surface feels really greasy and it will be a case of who can keep the best grip for the longest but I'm confident we've got a good set-up. We'll try a couple of small changes to try and improve the bike in the warm-up and if we can gain a bit extra then I'm sure I can be fighting for the top 10 tomorrow. Colin did an amazing job today to take fourth. He's doing Yamaha proud without Jorge being here and Ben obviously riding in a lot of pain, so if anything he's getting faster as he gets older!”