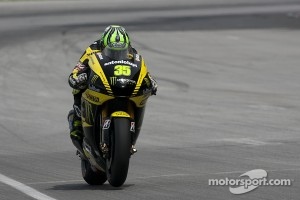 An emotional weekend lies in store for the Monster Yamaha Tech 3 Team and the rest of the MotoGP paddock when the 2011 World Championship campaign concludes at the Ricardo Tormo Circuit in Valencia on Sunday.

The French-based squad will join the close-knit MotoGP community in paying tribute to Marco Simoncelli after the immensely popular 24-year-old lost his life in a tragic accident during the Malaysian Grand Prix at Sepang last month.

British rider Cal Crutchlow is determined to put on a good show in honour of the Italian rider as he looks to end his rookie MotoGP campaign on a high note.

Crutchlow still has plenty to race for on Sunday with the coveted Rookie of the Year prize up for grabs. He holds a one-point advantage over Karel Abraham and he is confident he can claim the prestigious title for the second successive season for the Monster Yamaha Tech 3 Team after Ben Spies scooped the award in 2010.

The Monster Yamaha Tech 3 Team welcomes a new member to its ranks this weekend with double American Superbike champion Josh Hayes joining Crutchlow for the 30-lap Generali Grand Prix of the Comunitat of Valencia.

The 36-year-old has been drafted in by Tech 3 to replace Colin Edwards, who is recovering from left arm and shoulder injuries he sustained in the same accident that claimed the life of Simoncelli in Sepang.

Hayes has never raced at the 2.489 miles circuit before and this weekend gives him the first opportunity to experience Yamaha's prototype YZR-M1 MotoGP machine. Hayes is under no illusions about the difficult task he faces in adapting to the YZR-M1 and Bridgestone tyres but he is determined to enjoy the experience of testing himself against the world's elite riders in the last 800cc MotoGP race.

Edwards underwent successful surgery yesterday (Tuesday) at the University General Hospital in Houston to re-attach cartilage to his left humerus bone, which connects the shoulder to the elbow.

The four-week recovery period though prevented Edwards from participating in Valencia in what was scheduled to be his last appearance for the Monster Yamaha Tech 3 Team before he moves on to a fresh challenge in 2012.

“This weekend isn't going to be easy for anybody in the paddock after Marco's accident in Malaysia, but racing is the best way we can honour him and I'm sure that is definit ely what he would have wanted. MotoGP lost an amazing character and a phenomenally gifted rider and my thoughts and prayers are with Marco's family and friends. All of us will go out this weekend determined to put on a good show that Marco would be proud of. I also want to wish Colin a speedy recovery and I'm looking forward to seeing him back on track soon. Valencia was the first place I rode the Yamaha YZR-M1 a year ago and I've come on leaps and bounds since then, so hopefully I can finish the season on a high. The Rookie of the Year title is at stake and I'll be proud to win it after a close battle with Karel all season. I'm also looking forward to testing the new Yamaha 1000cc bike next week. The bike has been very impressive in Brno and Misano and I'm really excited to see what 2012 has in store.”

“I would like to say a hu ge thanks to Yamaha US, GYTR, the Monster Energy Graves Yamaha Team, the Monster Yamaha Tech 3 Team and Lin Jarvis from Yamaha Motor Racing for giving me this opportunity to race in Valencia. The circumstances leading to me being given this chance to ride the Yamaha YZR-M1 MotoGP machine are not how I would have chosen at all. My aim will be to represent Yamaha and Monster Energy in the best way I possibly can while trying to do Marco and Colin proud. Obviously I am facing a huge challenge having to learn a new circuit while also trying to the adapt to the bike and the Bridgestone tyres as quickly as I possibly can. I honestly don't have any expectations going into the weekend other than to enjoy myself and do a good job for Yamaha and Tech 3. I am certainly very excited to experience Yamaha's MotoGP bike for the first time and be part of the final race in the 800cc era."