Bautista on second row for final race of the year

Álvaro Bautista produced another strong performance in the tricky conditions of today’s qualifying to take fifth place on the grid for tomorrow’s race.

Bautista had to contend with the varying conditions during this afternoon’s hour-long session, which included strong winds, cold temperatures, intermittent rain and broken sunshine He coped well and was one of the busiest riders out on track as he completed 30 laps of the 4,005m Valencian circuit. Bautista improved his times, even as track conditions worsened and finished the session in the middle of the second row to give himself every chance in Sunday’s race, regardless of what the weather might be. 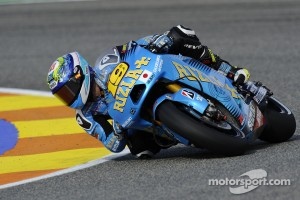 The ever-changing conditions made it very difficult for all riders in today’s qualifying, but Casey Stoner again provided a scintillating performance to take his 12th pole position of the season.

Tomorrow’s race will see the 2011 season draw to a close with what promises to be an exciting 30-lap race, because with rain forecast at some point during the afternoon it could prove to be a very close and open event.

“Today has again been a good day for us, despite the very difficult conditions. This morning I felt good in the dry session, because today in the cold conditions we had a good feedback from the bike. In qualifying it was very tough, because we had rain before the session and the track was a bit wet in some parts. I pushed hard from the beginning, but it was raining in some parts of the track and it made it even harder because when you see drops of rain on the visor it's always against logical thinking to push even more. At the end I did some good laps and got a good rhythm despite the strange weather and made my way to fifth on the grid. I’m quite happy with that because this track is not one of the best for Suzuki and we are all looking forward to tomorrow no matter what the conditions are. Yesterday in the wet we did very well and we have a good setting and if it is dry I think we can stay in the battle for the podium positions. We will have to wait and see what tomorrow brings, but we will push to the maximum in any condition because I want to finish the season with a good result and I think it is possible to get it.”

“The conditions for this afternoon’s qualifying were really horrible for all the riders. There were strong winds with very low grip and persistent light rain - it certainly meant that all the riders earned their money today! As we have said previously, these sort of conditions have been the worst possible for the GSV-R, but whilst the gap to Casey on pole is very big our level against the other guys looks very good. Congratulations to Álvaro on a great effort to qualify fifth, he’s been very focused all weekend and irrespective of the conditions, we aim to finish the season on a high tomorrow!”