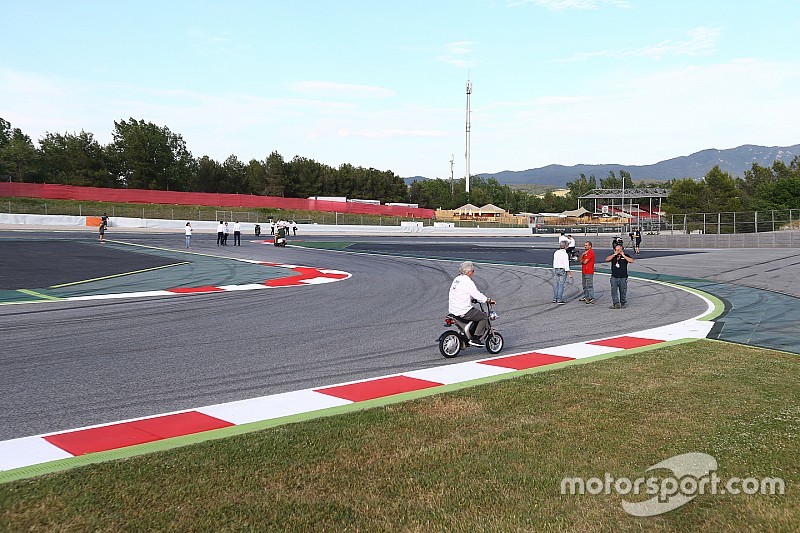 The MotoGP riders present at Friday’s Safety Commission meeting were unanimously in favour of switching to the Formula 1 layout of the Circuit de Barcelona-Catalunya, it has been revealed.

Following Luis Salom’s death in a crash at Turn 12 during Moto2 practice, it was decided that the remainder of the Catalan GP weekend should take place on the F1 variant of the circuit that bypasses Turn 12 with a chicane and features a shorter, sharper version of Turn 10.

The new layout was first trialled on Saturday morning in an extended one-hour practice session, topped by Maverick Vinales – whose best time was around three seconds slower than the best time posted by Jorge Lorenzo on Friday using the old layout.

In the wake of Salom’s fatal accident, a meeting of the Safety Commission was held to decide how to proceed, with 10 riders in attendance.

Speaking in a press conference on Saturday, Dorna CEO Carmelo Ezpeleta revealed that all 10 riders were in favour of using the F1 layout, subject to small modifications to improve safety.

The Spaniard also said that the riders would not consider allowing the event to continue on an unchanged track.

“Yesterday we had 10 riders in this Safety Commission, and immediately after the accident we talked to them,” said Ezpeleta. “We said we have this possibility [to change layouts].

“While it was still unclear what happened [to Salom], we could not continue exactly the same. If it happened once, it could happen again, even if the possibilities were very small.

“Immediately the riders said we need to go there [Turn 12] and study the possibility [of using the new layout]. They said ‘no’ to continuing with the same layout with the same conditions.

“After that, the riders proposed a solution, move some walls and do some other things, and finally they arrive unanimously at a consensus [to switch layouts].”

Ezpeleta also explained one of the changes was to paint a white line two metres away from the right-hand edge of the track approaching what is now Turn 14, the left-hand part of the chicane.

“On the first part [of the chicane] the braking point is very close to the wall, so we decide to make the track narrow and we make it forbidden to overtake [there].

“Also we create a run-off area with a gravel bed at the end of this straight [before Turn 14], and we protected that with an airfence.”

FIM Grand Prix Safety Officer Franco Uncini added that a decision whether to keep using the F1 layout for future MotoGP races will only be taken at the next Safety Commission meeting at Assen.

“When we have all the information about [the crash] at the next Safety Commission meeting, we’ll decide if we go back to the old layout or continue with the new layout,” said the former 500cc champion.

“Obviously if we keep this new layout, we will have to do some small changes to adapt the circuit for MotoGP, not just Formula 1.”