The Repsol Honda Team heads to Valencia for the last round of the MotoGP World Championship 2011 with mixed feelings. In one hand, sadness for the recent loss of Italian rider Marco Simoncelli, who passed away on October 23rd in a tragic accident at the Malaysian Grand Prix; and in the other hand, a desire to put on a good show as a tribute to Marco.

With Stoner already crowned World Champion and second place mathematically confirmed by Jorge Lorenzo, Andrea Dovizioso and Dani Pedrosa are involved in the fight for third place in the overall standings, being third and fourth respectively, with a narrow gap of only four points. 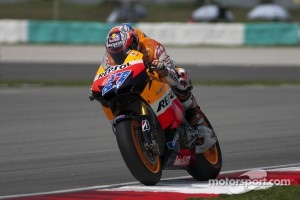 The three Repsol Honda riders will all have a different motivation this weekend: Casey, will look to sign off the year of his second MotoGP World Championship with a victory, Dani, who has experienced a difficult season due to injury will want to finish in the top three in the MotoGP standings, as he always has done since 2007, and Andrea, who has enjoyed his most successful season in the top class, will want to leave Honda an a high note before taking on a new challenge in 2012 with Yamaha Tech 3.

"It will be difficult to return to racing this weekend after Marco's terrible accident in Sepang but I think it is the best thing we can do to honour him. We know we all play a risky game and, even if compared to the past the safety of our sport is much better, unfortunately these kind of events still occur. My thoughts go out to his family and I hope that they are coping through this period. The race this weekend is the final round of an incredible season for us, we worked hard all year and after clinching the title in Phillip Island we are starting to look to 2012. After the race here in Valencia we will have the two day test on the 1000cc machine and then we can take a well deserved break and reflect on the ups and downs of a very long hard season. We will go out there this weekend and try to put on a good show for all the fans and especially in memory of Marco".

I’m very sad for the loss of Marco. I’m going to Valencia not in the right frame of mind for a race.

“I’m very sad for the loss of Marco. I’m going to Valencia not in the right frame of mind for a race. I will wear Marco's number 58 on the chest of my leathers, close to my heart, this is the only thing that counts. I have raced with Marco throughout my whole career, he was “the rival” and now that he is no longer with us, he has left a big void and I want to convert this feeling of emptiness to determination. I hope to get a good result at Valencia mainly because it is important for me to finish third in the Championship but I know the race will be difficult as it is not one of my favourite circuits and Dani is very strong there. Also, the GP of Valencia is my last race with Honda and I really would like to crown these ten years together with a good final race".

"Valencia will be a very special race for everybody. This weekend we will all have Marco in our thoughts and I hope the fans show their respect and appreciation to him, as the whole MotoGP family will do. Valencia is a track I like a lot and I'm looking forward to seeing all the fans there again. Last year I couldn't perform very well due to injury, but this time I hope to have a good race and finish the season in a good shape".

2011 finale in Valencia to pay tribute to Simoncelli

Rossi: Dovizioso is “an important name” for MotoGP