Spanish rider heads Repsol Honda one, two, three on day one in Sepang

Dani Pedrosa ended day one of Free Practice for the Shell Advance Malaysian Grand Prix at the Sepang circuit on top of the timing sheets with his Repsol Honda teammates, newly-crowned MotoGP Champion Casey Stoner and Andrea Dovizioso in second and third respectively.

Pedrosa went from strength to strength in the free practice sessions and in FP2 he eventually set a fastest time of 2m 1.250s on his RC212V that was untouchable for the rest of the field including Stoner who could only manage a best lap of 2m 2.070s and Dovizioso setting a best time of 2m 2.664s.

"Today we went pretty fast and consistent even though the track wasn't very clean. We did a good job in both practice sessions, but I would like to improve a little more on the chassis side to feel more comfortable with the front and choose the right tyre for the race distance. At the moment we are doing good steps but we need to keep on working with the same style and try to perform well tomorrow in qualifying," said Pedrosa.

Newly crowned 2011 champion Stoner said, "Everything went pretty well today, we're not too far off the pace with race tyres, we did over race distance and were pretty happy with the lap times we were doing on the soft tyre. We then went to the hard tyre and found it a little better and more consistent, we'll have to see what the conditions are like tomorrow but so far we're pretty pleased and the bike feels ok."

Finishing day one in 4th position was Italian rider Marco Simoncelli (San Carlo Honda Gresini) who was again just shy of the factory Honda riders with a best time of 2m 2.823s and his teammate Hiroshi Aoyama (2m 2.951s) finished the day in 5th position making it a Honda top five on the timing sheets.

“It has been a good start and my feeling for the bike is great. I had a lot of confidence with the bike already last week at Phillip Island but the rain ruined everything. The conditions are completely different here and the track temperature is high, which gives me a better feeling for the bike," said Aoyama.

The first rider to come anywhere close to the Honda riders was American rider Colin Edwards on the Monster Yamaha Tech 3 YZR-M1 in 6th position with his best lap of 2m 2.991s. Alvaro Bautista had a productive first day and sits just behind Edwards on a time of 2m 3.123s while in 8th place was Randy de Puniet who set a best time of 2m 3.159s on his Pramac Racing Ducati GP11.

“Today was a really good day and I was fast straight out of the crate. I was fourth for almost the whole of the second session and I'm happy to end up sixth," said Edwards. The Texan also spoke out the temperatures in Malaysia: "The conditions are typically hot here in Sepang but maybe it doesn't bother me as much as some of the others. I'm from Texas so I live in this type of heat and humidity and I'm pretty much used to it."

The first of the factory Yamaha bikes, belonging to Ben Spies, was up next in 9th position with Spies returning to action this weekend after sitting out last week’s Australian GP when the American was left concussed after a high-speed crash in qualifying. Spies couldn’t manage better than 2m 3.312s while following Spies was Czech Republic rider Karel Abraham for the Cardion AB Motoracing team on a best time of 2m 3.318s. 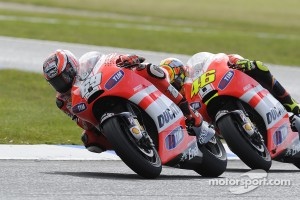 The first rider outside the top ten was that of Nicky Hayden (Ducati Marlboro) on a best time of 2m 3.445s giving him 11th place while in 12th is Pramac Racing’s Loris Capirossi (2m 3.595s) who sits just in front of Valentino Rossi and his Ducati Marlboro GP11.1 on his best lap of 2m 3.677s.

“Conditions are very different from what we just had at Phillip Island. It’s pretty warm and sticky, though it can definitely be even hotter here. This is a completely different bike than we had here at the test, so it takes a little extra time to get a rhythm, and we only used two different sets of tyres the whole day," said Hayden.

Jorge Lorenzo (Yamaha Factory Racing) has already been confirmed as not taking part this weekend after last year’s MotoGP Champion crashed in warm up for the Australian GP and severely damaged the top of his ring finger on his left hand. His replacement rider Katsuyuki Nakasuga crashed in both FP1 and FP2 so sits in 18th and last place on the timing sheets.