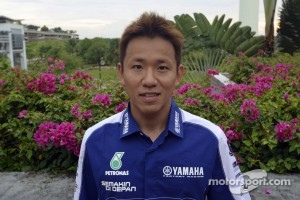 Katsuyuki Nakasuga will replace Jorge Lorenzo for the Malaysian GP

Reigning World Champion Lorenzo received an injury to the ring finger of his left hand during the Sunday morning warm up session prior to the Grand Prix of Australia. He has since received surgical treatment and is now recovering at home in Barcelona.

30yr old Nakasuga-san is a current Japanese Yamaha test rider with an excellent working knowledge of the YZR-M1 and Bridgestone tyres. He is also competing in the 2011 All Japan Road Racing Championship, JSB1000 class, and is currently third in the standings.

A decision on Jorge Lorenzo’s participation in the final race of the season at the Grand Prix of Valencia will be made within the next two weeks.