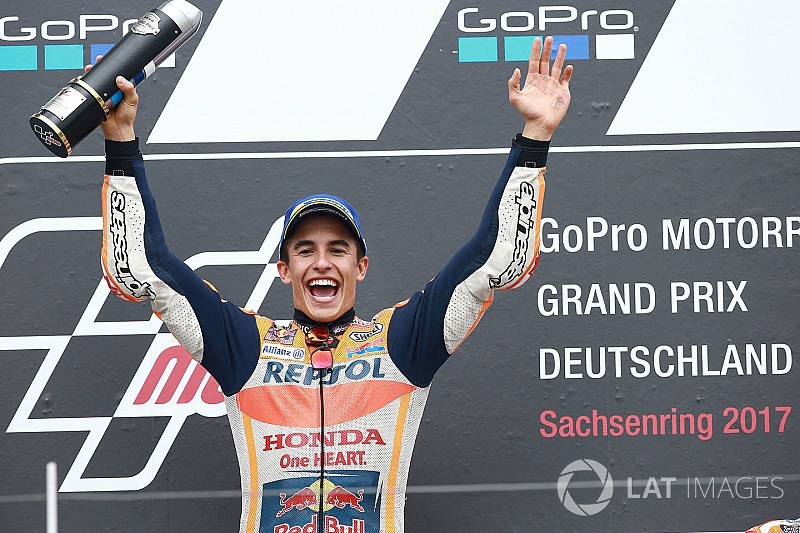 Marc Marquez retook the MotoGP points lead with his second win of the season in the German Grand Prix, but he was made to work for it by local hero Jonas Folger, who took a sensational second place.

Marquez led from pole early on, but had to play second fiddle to a charging Folger on his Tech 3 Yamaha for a handful of laps early on, until the German outbraked himself and allowed him back in front.

Another mistake at Turn 1 from Folger looked to have settled the lead battle, but Folger continued to hound Marquez until the Honda rider got the hammer down with three laps to go.

From pole position – the eighth of his career here – Marquez led the race to Turn 1 ahead of Dani Pedrosa’s Honda, the fast-starting Ducati of Jorge Lorenzo, Folger and Danilo Petrucci (Pramac Ducati). Valentino Rossi was up to sixth from ninth on the grid on the best of the works Yamahas.

The fastest man on the track, Folger then passed Pedrosa for second, and set his sights on leader Marquez – slicing past him on lap five and lead much to the home crowd’s delight.

But his lead didn’t last for too long, as he ran wide at Turn 1 and Marquez repassed him on lap 10.

Further back, Rossi snatched fifth from Lorenzo, with erstwhile points leader Andrea Dovizioso – from 10th on the grid – doing likewise. Rossi then outbraked Petrucci for fourth at Turn 1 on lap nine.

Following his lacklustre qualifying, which resulting in him starting 11th, Yamaha’s Maverick Vinales rose into the top six just before half distance.

At the front, Folger shadowed Marquez, while Pedrosa followed at a distance. Rossi led the chasing pack, with Dovizioso and Vinales on his tail.

Folger made another mistake under braking at Turn 1, giving Marquez a brief respite, but came back at Marquez again in the closing stages.

But Folger couldn't keep up the pace in the final few laps, and ended up 3.3 seconds behind Marquez at the flag - with Pedrosa another eight behind in third place.

Behind the leading three, the canny Vinales picked off Dovizioso and then Rossi to take fourth with 11 laps to go, while an impressive Alvaro Bautista (Aspar Ducati) grabbed sixth from Dovizioso with eight laps to go.

Lorenzo, who gambled on soft tyres all around, slumped outside the top 10 by half distance. He finished 11th, a spot ahead of Petrucci, who also faded badly.

Sam Lowes crashed his Aprilia at Turn 7, and Suzuki’s Andrea Iannone suffered a nasty fall at Turn 12 while fighting Lorenzo for 11th.

Hector Barbera (Avintia Ducati) was disqualified for failing to serve a ride-through penalty after jumping the start.

Live: Follow the Sachsenring MotoGP race as it happens