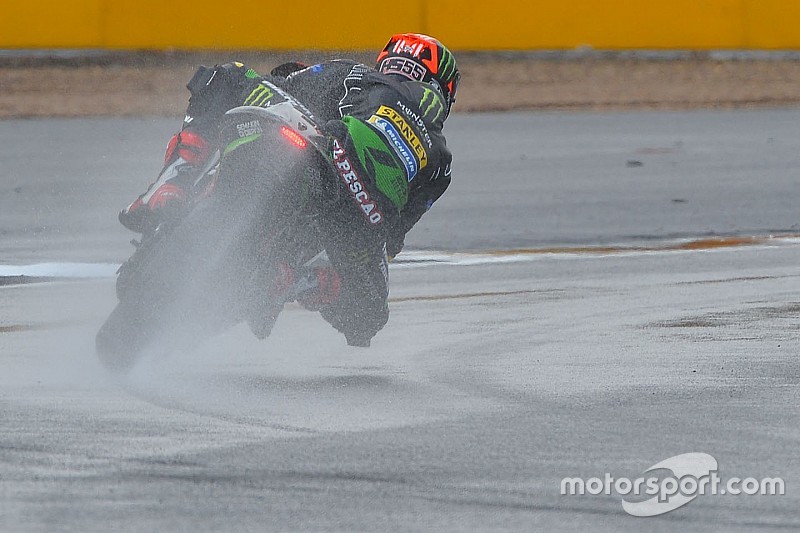 MotoGP race director Mike Webb has said the cancellation of the British Grand Prix was a direct result of Silverstone's new-for-2018 asphalt failing to drain properly.

In an attempt to get rid of long-standing bumps and give the circuit layout a consistent asphalt, Silverstone was resurfaced in its entirety for the first time since 1996 at the start of this year.

However, as MotoGP running kicked off on Friday, multiple riders complained about the bumps were no better, and when rain started falling during FP4 on Saturday, several riders crashed at Stowe, including Tito Rabat, who broke his leg as he was struck by Franco Morbidelli's bike.

Webb confirmed that the Sunday race was cancelled because the new asphalt was too dangerous in rainy conditions, as it was not draining properly and causing standing water to amass in multiple places.

"Yes, it is a direct result of the track surface," said the New Zealander. "We had a number of years of experience here in very wet conditions recently with the old surface and we've been able to run races.

"This year with the new surface is the first time we've encountered quite so much standing water in critical places of the track.

"It is pretty straightforward, we have been forced to cancel today's event due to the track condition.

"Primarily it is due to water accumulated on the surface and I think you have seen the results of when we've been running here in heavy rain, that the circuit in some places is not safe because of the way the water does not drain from the surface.

"We did everything we possibly could to run an event today, obviously the very last thing any of us wants to do is to cancel an event. However, safety remains a priority."

Due to heavy rain forecasted for Sunday afternoon, the race was rescheduled for 1130 local time, but conditions were already wet at that point and they did not improve until the race was eventually cancelled just before 1600.

"We attempted to start the race this morning, it was obvious the track conditions weren't safe," added Webb. "After that and consultation with the riders we made a start delay to discuss the situation further.

"When it was obvious that the track condition was not improving, even when the rain abated a little the track surface was still too wet.

"We discussed various options, including running tomorrow, that was discussed with the teams and with the circuit, the promoter the organisers.

"It was concluded that that was not a possibility and so the other possibility that the circuit requested, that we agreed with, was to delay today as much as possible until such time the conditions were safe.

"We've reached the point where even though the rain is getting less, the circuit is still not in the condition that we could safely run race so we've taken a very difficult, regrettable decision to cancel."

Webb praised the Silverstone staff for trying to fix the problem with drainage, with track workers trying to mitigate the issue overnight.

"I must say from the circuit point of view, the staff, have done an unbelievable effort over the whole weekend, not just today," he said. "An enormous effort to try and make the track safe.

"Until the last minute they were still working but unfortunately we couldn't battle nature."