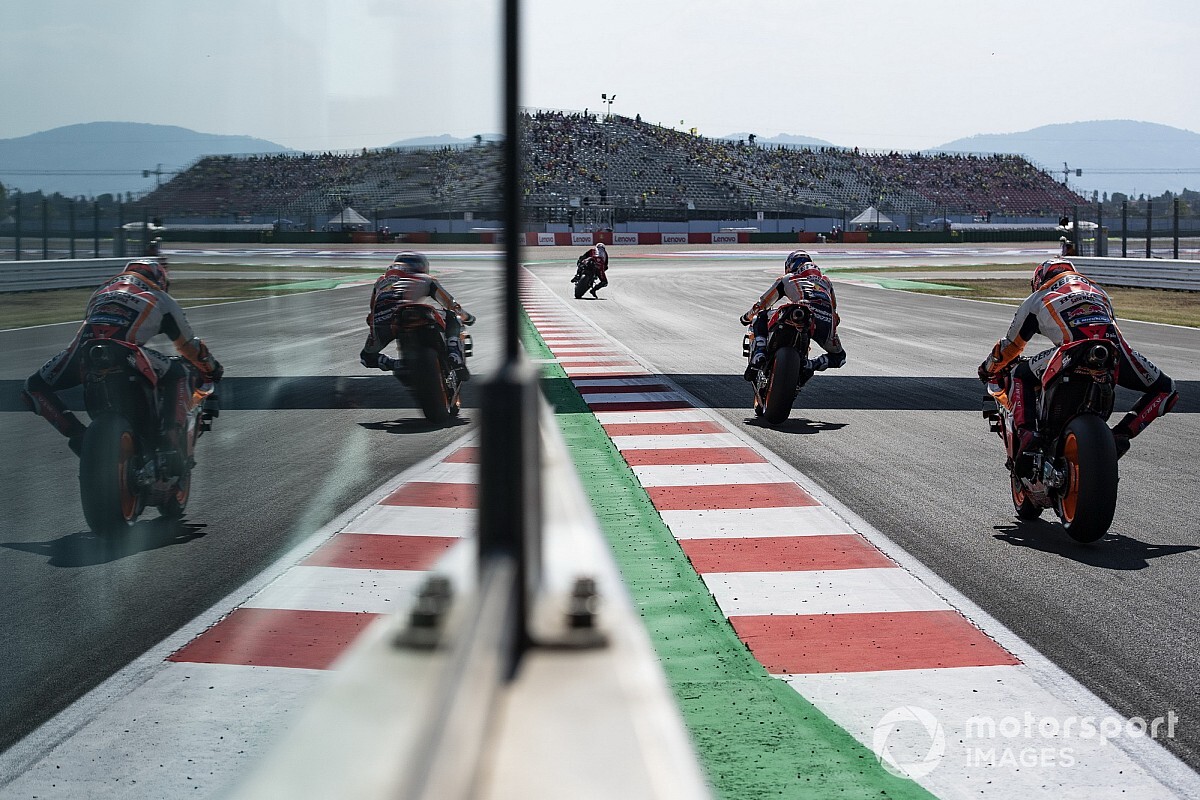 MotoGP is testing a rider radio warning system this weekend at Misano, but it has raised fears that it could advance into Formula 1-style ship-to-shore communication. Would this dilute MotoGP or should it be embraced?

Valentino Rossi believes introducing radio communication into MotoGP would be "a good step" for the series, though this has been met with a mixed response from other riders.

On Friday, Honda's Stefan Bradl tested a radio communication system on the bike upon request from Dorna Sports as part of a push to introduce a new means of warning riders of on-track hazards after the events of the Austria double-header.

During the Moto2 Austrian Grand Prix, Enea Bastianini crashed exiting the first corner and he and his bike were left in the middle of the track – with Aspar's Hafizh Syahrin unsighted behind another rider as he pulled out into the path of the stricken Italtrans machine. 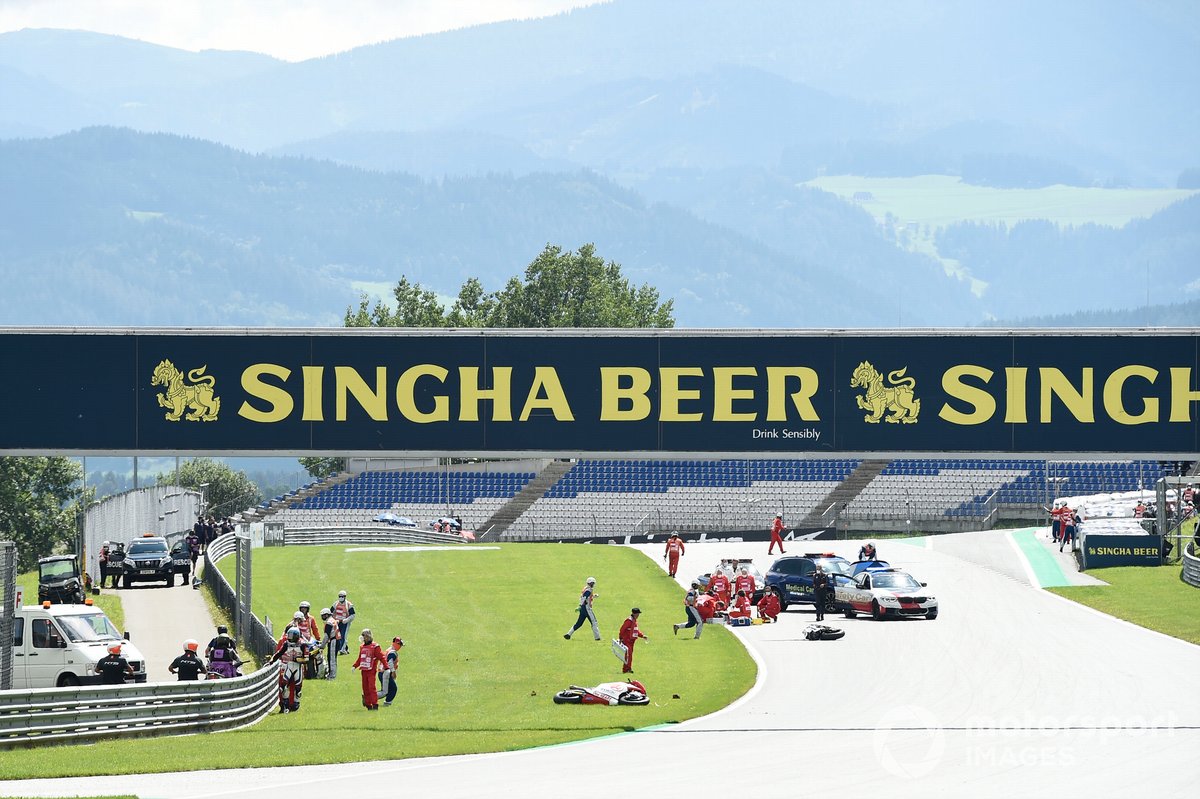 Syahrin escaped serious injury, while Dominique Aegerter was lucky not to be struck by debris from the collision.

In the MotoGP race, a huge collision between Johann Zarco and Franco Morbidelli brought out the red flag – though numerous riders didn't see the flag and had no message sent to their dashboard.

"A lot of people said the other week with the red flag they didn't see it," LCR's Cal Crutchlow said when asked by Motorsport.com for his views on the introduction of a radio warning system.

"They didn't see the red flag for so many laps and they didn't get it on the dashboard, while some riders did. And that was true. So, I think in that sense it might be good."

After a meeting with the riders in Safety Commission during the Styria weekend, it was decided to try the radio system again, with the idea that pre-recorded messages from Race Control are sent to a rider to warn of hazards ahead of them. 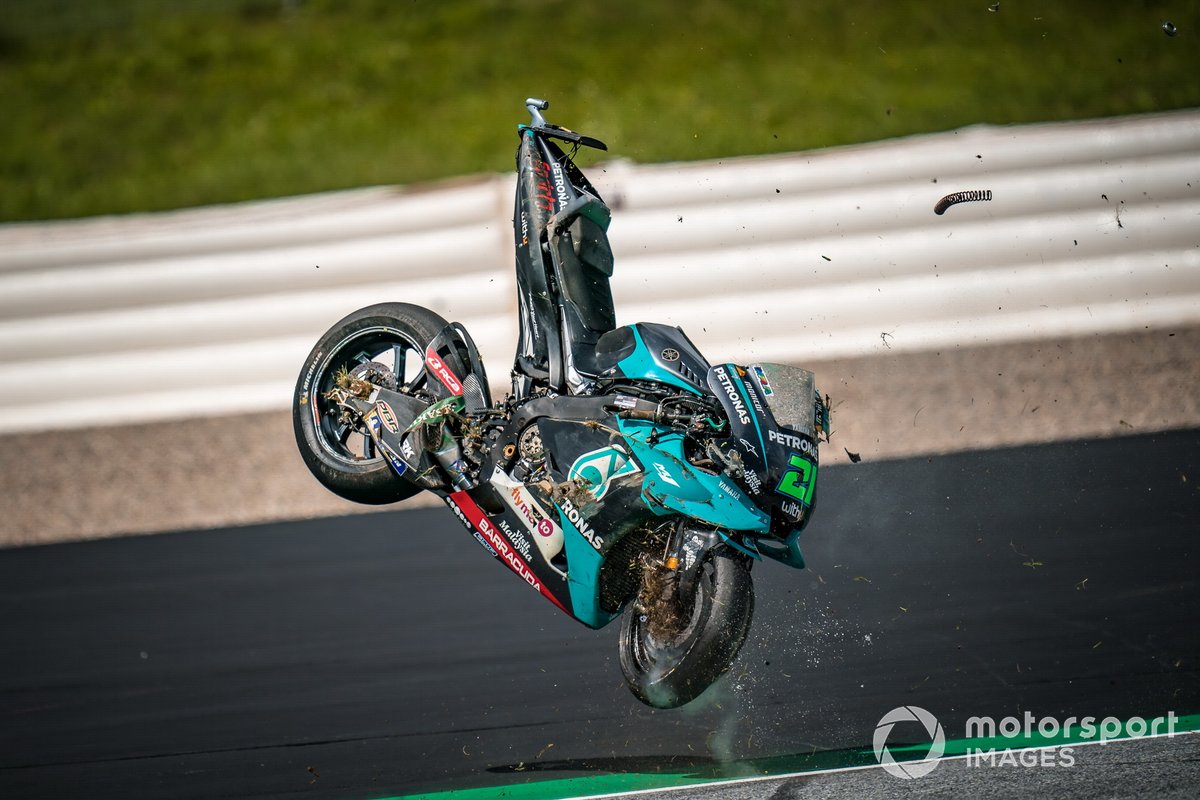 From a safety point of view, this is quite a logical step. During the Spanish Grand Prix weekend, flag positioning was brought up after Marc Marquez slowed in front of Alex Rins on the racing line during FP3 at Jerez – with Rins not seeing a yellow flag at Turn 2 for a crash while Marquez had.

Several riders called for MotoGP to implement a warning light system at marshal posts similar to those used in Formula 1 – which is an option being investigated. While riders do get messages on their dashboards, Fabio Quartararo noted that there is a delay in riders receiving such communications.

"I think something really important is that when the team is sending information to the dashboard, it's in the next sector," Quartararo explained. "So you have... some sectors are short, 30 seconds later. So, for me, [it's important] to have more clear messages in the dashboard. With the radio, let's see. We can't know if we don't try it." 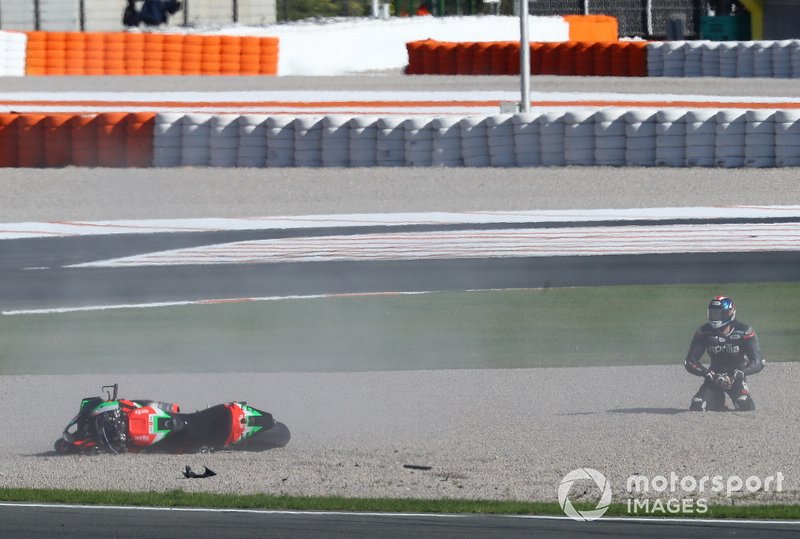 All riders will try the system on Tuesday during a test at Misano. While its primary purpose at present is as a safety measure, comments from Dorna's sporting director Carlos Ezpeleta on Friday stating that in the future perhaps communication to riders can come from the teams sent social media into a panic.

Fears emerged from some believing the addition of ship-to-shore radios in MotoGP would dilute the racing, citing the level of driver coaching that happens in F1. This has, of course, been more tightly regulated in recent years, but drivers are still given a great deal of information regarding what's happening with the car.

On this prospect becoming a reality in MotoGP, KTM's Pol Espargaro warned: "The problem is if we put the radios on, the next step is going to be the pit boxes will control instantly what is going on with the bike.

"Then the next step is going to be the guys in the pit box are going to see the tyre wear and all these things and tell the rider what to do. So in the end it's going to be less human and more machine. This is what's happening in Formula 1 and I don't really like it. I want to keep it a more human sport." 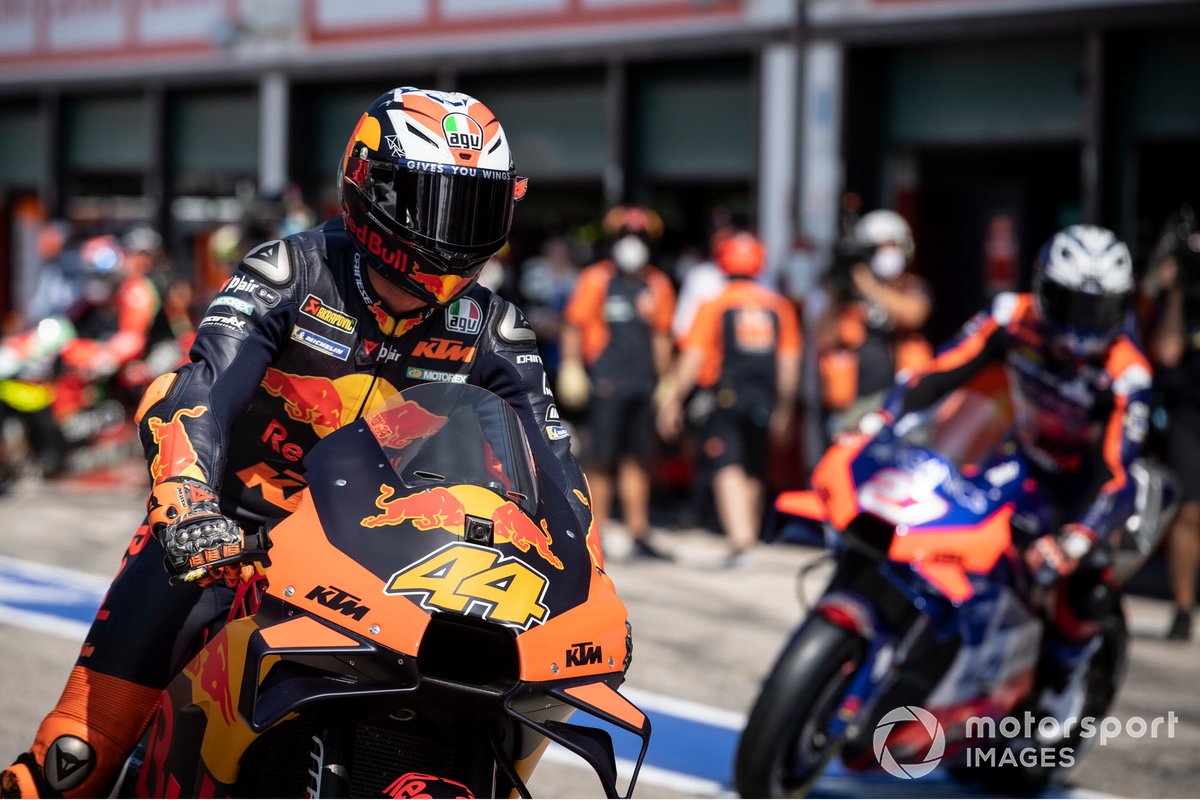 While it can easily be argued that F1 drivers have lost that gladiatorial image owing to instant radio messages of complaint about rivals during race situations, radios have ultimately not done anything to ruin racing – no one has an asterisk next to the results of Monza 2020, Hockenheim 2019 or Canada 2011, for example, just because the winning driver used a radio.

No matter how much an engineer speaks to a driver, it is still the latter which makes the difference. And this will always be true in MotoGP.

Plus, MotoGP currently has no live telemetry. Thus, should rider/team radio communication ultimately come to pass, it wouldn't take much for the FIM to outlaw live telemetry to keep that "human" element.

And that "human" element, regardless of radios, will always remain. Even if they are implemented, using a radio from the bike won't exactly be easy - bike racing is far more physical over a lap, and an F1 driver doesn't exactly change his body position at every single corner. 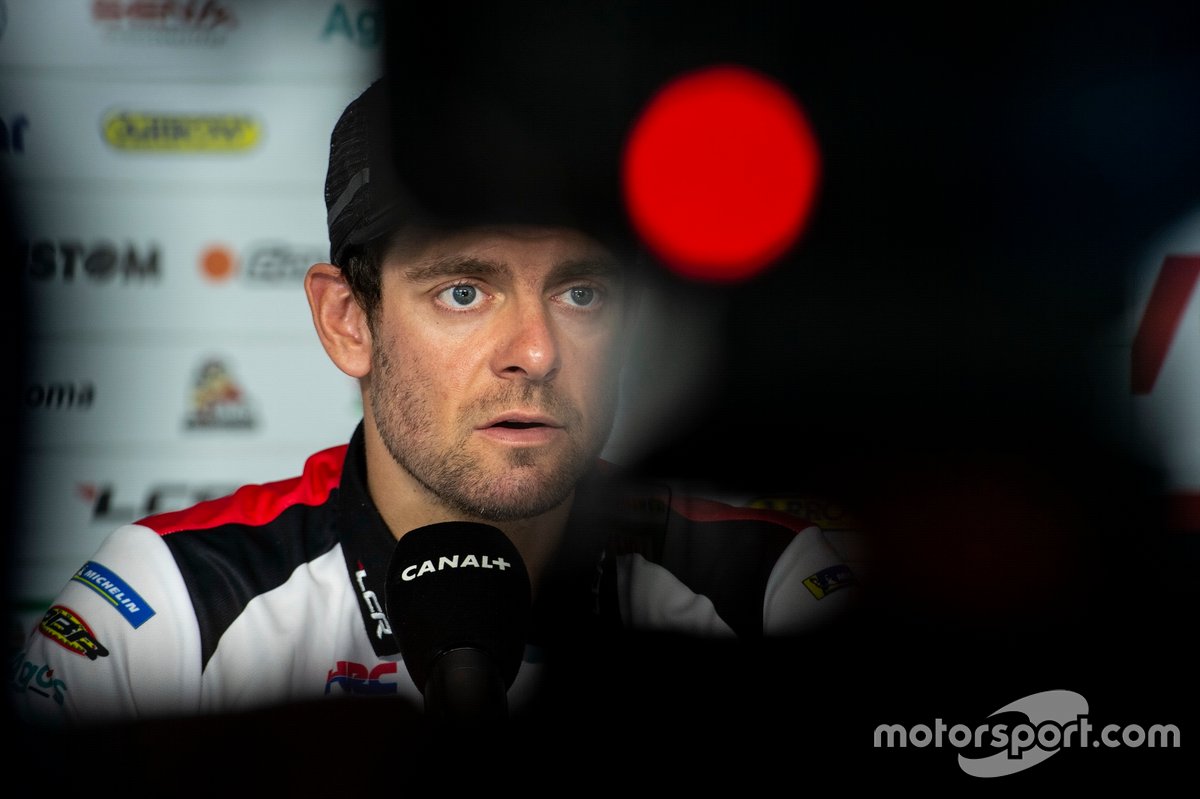 "It's whether you will be able to speak back," Crutchlow says. "Depending on what bike you're riding, it depends whether you can speak or not, because some riders are hyperventilating when they are riding, and some are riding with their mouths closed."

MotoGP's Esports events with the riders during lockdown offered a glimpse of on-bike rider communication, as all competitors spoke to each other while they were racing.

It made for fun viewing, and it's a unique element to F1 that we can hear a driver's thoughts and comments during a session. As the likes of Lando Norris have proven, there's an entertainment value to radios – and MotoGP has a fair few characters of its own.

"One thing is, I'd be the Kimi [Raikkonen]," Crutchlow joked. "Can you imagine me and Jack [Miller] talking to the teams? It would just be bleeped out all the time!" 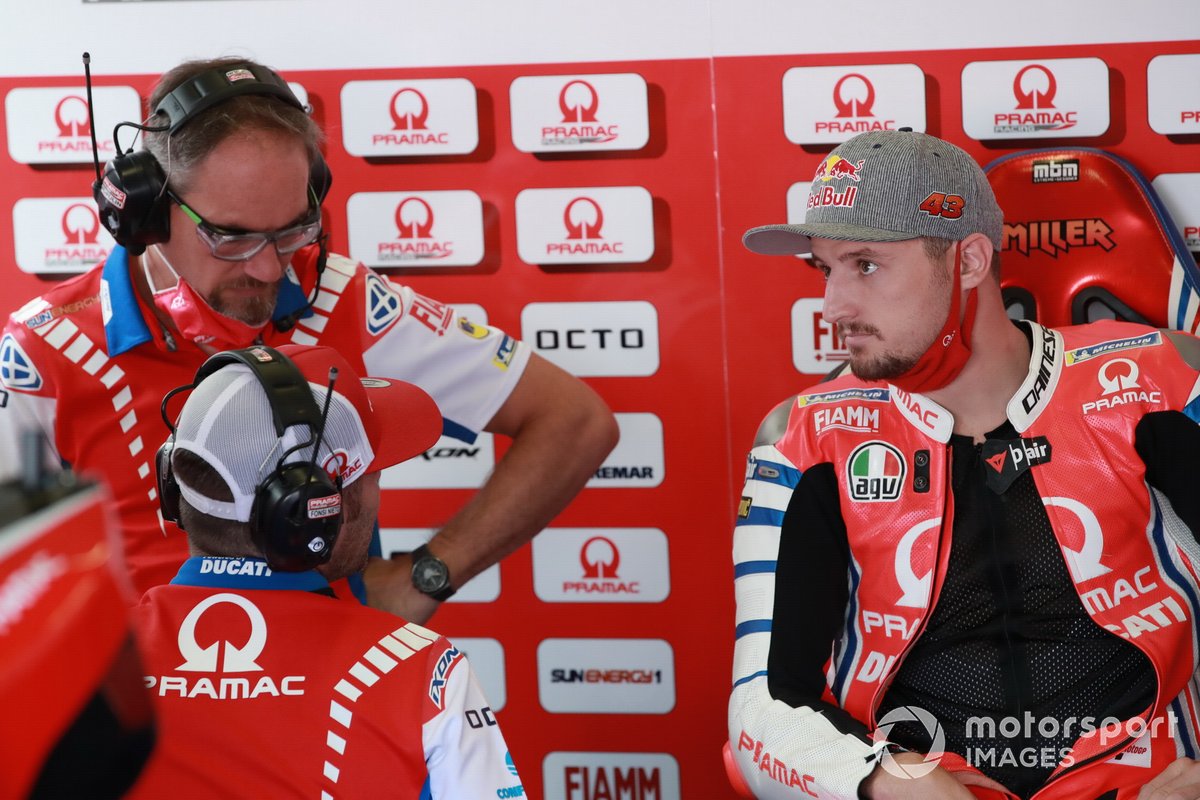 Any soul who has attended a Miller debrief knows how colourfully descriptive he and other riders can be, especially in the heat of the moment when the TV cameras are turned off.

Whether MotoGP does develop this radio warning system into something akin to F1's ship-to-shore communication remains to be seen, but all series must have an open mind to new things.

And if rider radios do become a thing, it's foolish to believe it will make MotoGP boring.

"What I think is that the strong point of MotoGP compared to Formula 1 is the races are more fun, because the battles are stronger," Rossi concludes. "Formula 1 is the top motorsport in the world, the performance of the cars is unbelievable and it's the challenge of the speed, to build the fastest car in the world. 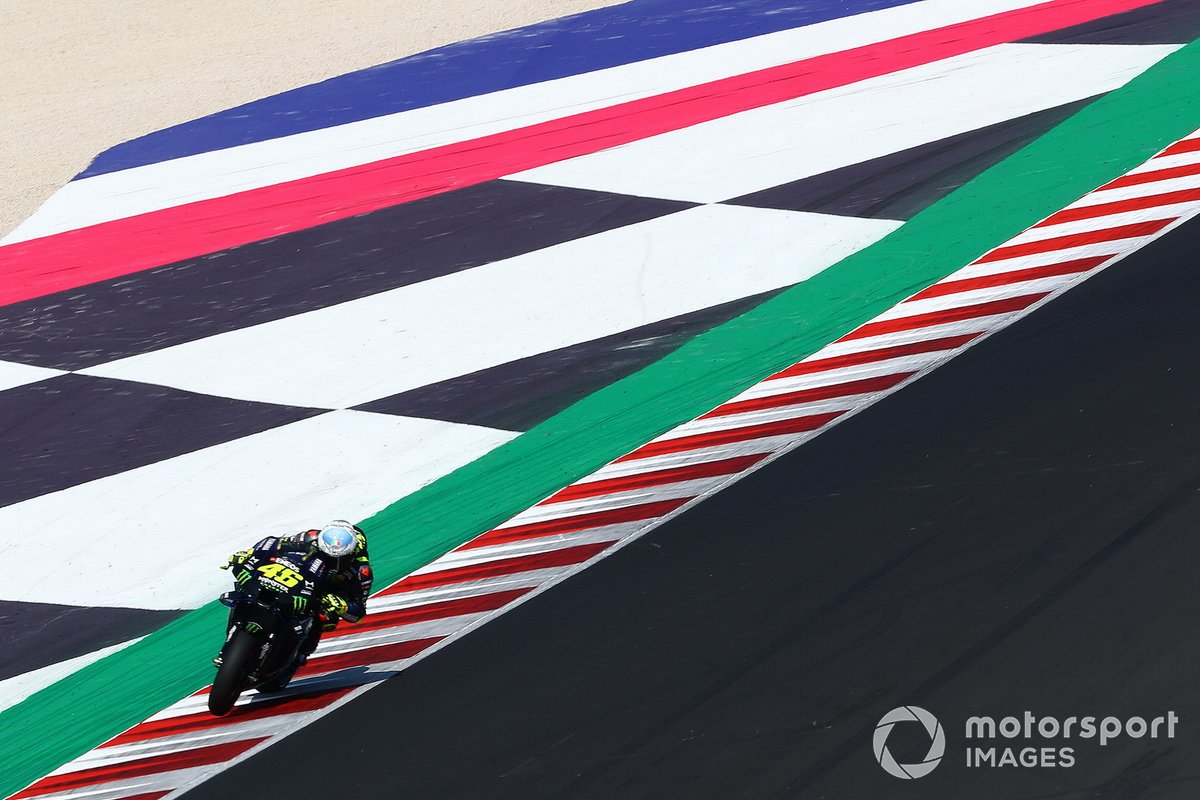 "I don't think that MotoGP is more fun because [there is] no rider communication. So, we are a top level in motorsport and in motorcycle racing, and the communication with the box can increase our level. I think we can gain time during the practice when you slow down, you can speak with the box a little bit like the race cars.

"For me, it's interesting. It will not change the DNA of our racing I think."