Yamaha Factory rider Ben Spies delivered a sensational performance today to take second in the Valencia Grand Prix. The Texan was quick to tuck in behind the fighting duo of Andrea Dovizioso and Dani Pedrosa, pacing the two as they fought for position. With seven laps to go he made his move and began to close down race leader Casey Stoner. Capitalising on a small mistake by the race leader, Spies moved to the front and managed to create a small gap. Unfortunately the last corner saw Stoner fight back, charging to cross the finish line just 0.015 seconds ahead.

Katsuyuki Nakasuga put in a brilliant performance today in his first ever premier class MotoGP race. The Japanese rider has faced challenging weather conditions all weekend on his first visit to the Valencia circuit. Faced with a grid of experienced GP riders and hugely changeable track conditions, Nakasuga-san delivered, holding his own and fighting through to take a very respectable sixth place finish.

Todays Grand Prix at Valencia was not only the last of the season, but also the last of the 800cc era. Although unable to ride for the last two Grand Prix, Jorge Lorenzo has amassed enough points to seal second in the Championship standings with 260. Team mate Ben Spies takes fifth place with 176 points. 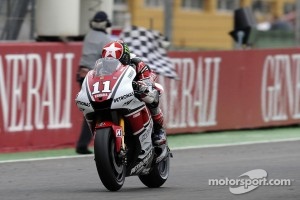 Ben Spies
Position 2nd - Time +0.015
The conditions were really tough today, with the rain it was so difficult to know how hard to push so I was just concentrating on bringing the bike home. We were able to follow Dani and Dovi and get past them eventually and then get past Casey when he made a small mistake. When theres no rider in front of you, you dont have a judge on how slippery the track is so its difficult to judge speed in that last lap. When we came out of the last corner I got the paint sucked off the bike by Casey as he went past! Im happy enough; we made a huge charge at the end and finished well. Considering how the last month has gone its a great way to end. Well focus on the test now and aim to be up there and even more competitive next year. A huge thank you to Yamaha and my crew who made sure I had a great bike to ride today. This morning we all came out to make some noise and say goodbye to Marco, Im pretty sure he heard us and I know he would have approved!

Katsuyuki Nakasuga Position 6th - Time +23.818
I was really surprised with sixth position in the race! In the beginning I was very nervous because of the weather condition so my main target was to complete the race. I am used to Japanese races which only last 30 minutes so I was worried that I might not be able to keep my concentration for nearly double the time. Finally Im very happy, the last five laps were quite risky because it wasnt easy to go faster but I had nothing to lose so I wanted to push as hard as I could. Its been amazing to experiment with a real Grand Prix race, not only can I use this for future development riding but Im very pleased with the good result. The weather maybe helped me, but I am happy and enjoying the moment. 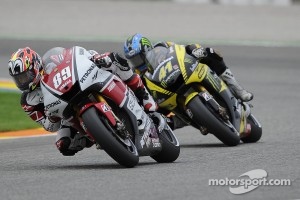 Wilco Zeelenberg - Yamaha Factory Racing Team Manager
That was a very surprising race but very exciting as well! We are very happy with the results; Nakasuga-sans sixth position is fantastic. 30 laps in dry and wet conditions are very difficult when you have to push. To finish in front of regular GP riders is very good. Bens podium in between those two competitors was brilliant, a shame we just got passed at the line. Overall weve had a great weekend, now were going to work hard for the next few days to prepare for 2012.

Massimo Meregalli - Yamaha Factory Racing Team Director
What a race! For sure it was a really difficult one. Ben did a fantastic job; his reactions to everything on track were great. Unfortunately we lost the race for just 0.015 seconds. Its very important to me how we finished the Championship and this is a very good starting point for next season. Nakasuga-san achieved a great result; I dont think we were expecting him to do so well! We have finished our 50th anniversary of Grand Prix racing in a very fitting way. We are going to have two really important testing days now on Tuesday and Wednesday, Bens mood is pretty high and he is focused on the test. Well keep pushing and working hard to be ready for the next season.