2011 finale in Valencia to pay tribute to Simoncelli

The Ricardo Tormo circuit in Valencia has traditionally been the scene for celebration since it started to host the final round of the MotoGP season but this weekend there will be a very different feeling for the whole paddock that for the first time will be without Marco Simoncelli following the Italian’s fatal crash two weeks ago in Malaysia.

Simoncelli was laid to rest on Thursday 27th October in his hometown of Coriano with the motorsports world looking on. The MotoGP paddock took some time to remember ‘Super Sic’ last week and this weekend at the Gran Premio Generali de la Comunitat Valenciana they plan to remember the #58 rider in a number of ways. 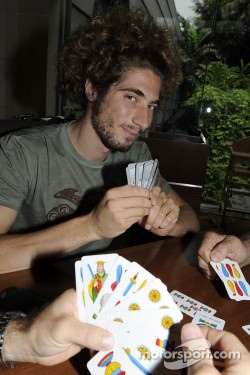 Simoncelli’s San Carlo Honda Gresini Racing team finally decided to compete in this weekend's race as a tribute to their No. 1 rider. Team boss Fausto Gresini originally said that his team would not race in Valencia but later reconsidered and said that his team would compete in honour of the tragic 24-year-old. Gresini confirmed that Hiroshi Aoyama will take part in the MotoGP event, while Michele Pirro and Yuki Takahashi will race in Moto2. The team will also have one of Simoncelli’s RC212V’s in their garage for the duration of the weekend.

Gresini said, “The decision to participate was not an easy one, but we have made this choice as it is what Marco would have wanted. Going out on track at Valencia is definitely the best way to honour him by doing what he most loved to do; ride and experience the world of MotoGP. 'Super Sic' will be present in the hearts of Hiroshi Aoyama, Michele Pirro and Yuki Takahashi, and I am sure that they will give him a most fitting tribute with their performances on Sunday."

While the teams and riders continue to come to terms with Simoncelli’s death, they will all have the tragic rider in their minds when lining up on the grid this Sunday. Newly-crowned World Champion Repsol Honda’s Casey Stoner along with teammates Andrea Dovizioso and Dani Pedrosa have all paid tribute to Simoncelli. Speaking ahead of this weekend’s race Double World Champion Stoner said, “We will go out there this weekend and try to put on a good show for all the fans and especially in memory of Marco."

Meanwhile Pedrosa and Dovizioso will head into this weekend with a view to grab third overall in the championship standings. Pedrosa will look to finish strong in a season that has seen the Spaniard hampered by injury while Dovizioso will push hard for a strong finish to the season and to his career with the Honda Racing Corporation as he moves to Yamaha Tech 3 next year.

Second placed man in this year’s championship, Jorge Lorenzo has been ruled out of racing this weekend due to his injured finger that had to be surgically re-attached following a high-speed crash in the warm up session at Philip Island, Australia. His Yamaha Factory Racing team confirmed that the Spanish rider was not fit to race but is hopeful that he will be able to take part in the scheduled test at the same track next week. Yamaha test rider and All Japan Superbike competitor Katsuyuki Nakasuga will once again step in to rider Lorenzo’s YZR-M1. 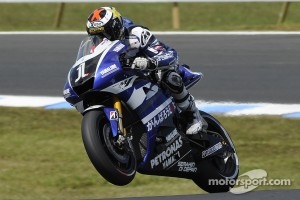 Speaking about not having Lorenzo competing in the final race of the year Yamaha Factory Racing team boss, Wilco Zeelenberg said, “The tendon on top of the finger is now connected to the bone again and that takes time before he can bend it and get movement back because if he starts immediately it will just come loose. It would be nice to have him in Valencia on the bike but the target is for him to get fit and come back competing and not just coming back for the sake of it.”

Lorenzo’s teammate Ben Spies confirmed that he will contest the last race of season although he is still recovering from his injuries that he sustained in Phillip Island following a high-speed crash during qualifying. “I can’t believe I won’t be battling Marco on the track this weekend,” Spies said sadly while adding, “It’s an incredibly sad way to finish the season. I’m going to honour him in the best way I know how, on the track. As with last year I arrive in Valencia recovering from injuries, but will of course give 100% of my efforts into performing to the best of my ability.”

Monster Yamaha Tech 3 Team rider Colin Edwards is still recovering from the injuries he received after he and Valentino Rossi collided with Simoncelli in Malaysia and the American rider confirmed that he is not in a position to race this weekend. Shortly after the team announced that Edwards’ fellow countryman Josh Hayes will deputise for the 2-times World Superbike Champion.

Speaking from his home Edwards said: “Firstly, I want to thank everybody for all their messages of support since Sunday. The support and love has been overwhelming and it has been a great comfort to me at this difficult time. My heart goes out to the family and friends of Marco and I will miss him a lot, as will the entire MotoGP family. I watched Marco's funeral yesterday and I really wish I could have been there. I wanted to go but unfortunately my injuries meant I was unable to travel. I know Valentino spoke to Marco's family on my behalf and I thank him for that. It was a great service and a fitting celebration of his life.

“I also wanted to be in Valencia next week to give my support to MotoGP, but it is not going to be possible because of the surgery I need on my left arm. The top of my left humorous bone has got multiple small fractures but the cartilage that is around the top of the bone has been pulled off. The surgery will anchor the cartilage back to the bone but there is no nerve damage, so I should be 100 per cent in about four weeks,” Edwards added. 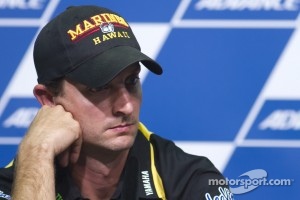 While there are a number of finishing places still not decide in this year’s championship one rider who will make his final race on a MotoGP Machine after 22 years in World Championship motorcycle racing is Pramac Racing’s Loris Capirossi. The veteran Italian was also present at Simoncelli’s funeral and said he will find it hard racing on Sunday. "It will be difficult to be in the paddock without Marco, as everyone will miss him,” said ‘Capirex’, while continuing, “No one will feel like going on the track, but we have to do it for him and for all fans of motorcycle racing. It will be my final race, and I still don't know what will be going through my head, but I want to do it as well as possible.”

Many teams, and individual riders will have their own tributes to pay to Simoncelli with many people in the motorsports world already doing so like the Formula One Paddock that held a minute’s silence for the fallen rider at last weekend’s Indian GP. Dovizioso will wear #58 on the front of his leathers to honour his long time on-track rival while the Italian Motorcycle Federation has called on the FIM to officially retire Simoncelli’s racing number.

There have been many suggestions on what to do to honour the Italian following his untimely passing including the idea to rename the Misano Adriatico circuit after Simoncelli. However probably the best idea came from Simoncelli’s father Paolo who has called on the organisers, fans and teams to hold a ‘minute of noise’ with all the MotoGP machines revving at the same time for a minute at this weekend’s race instead of the traditional minute silence. 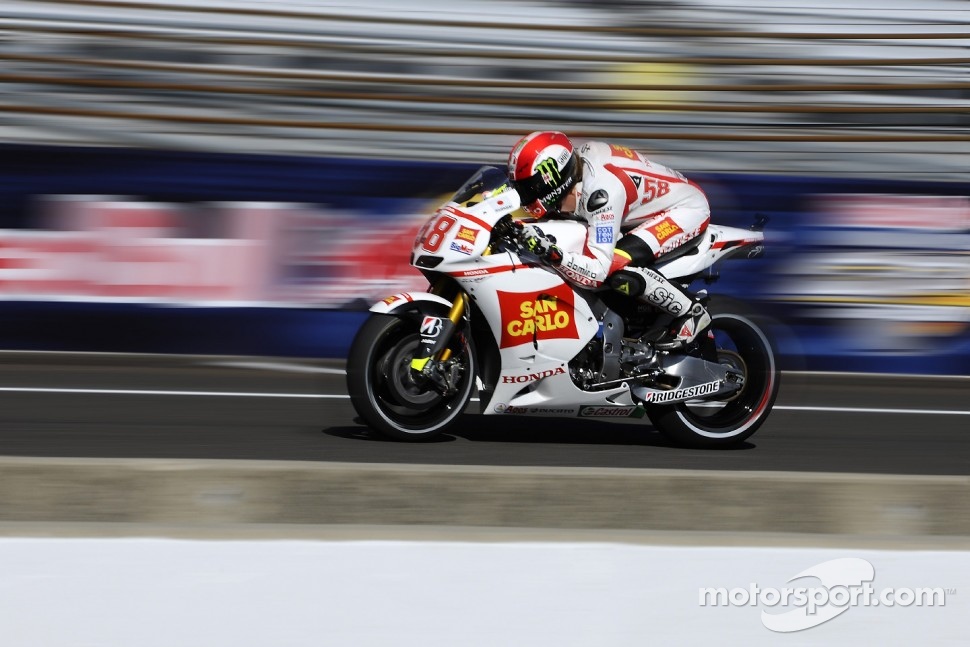