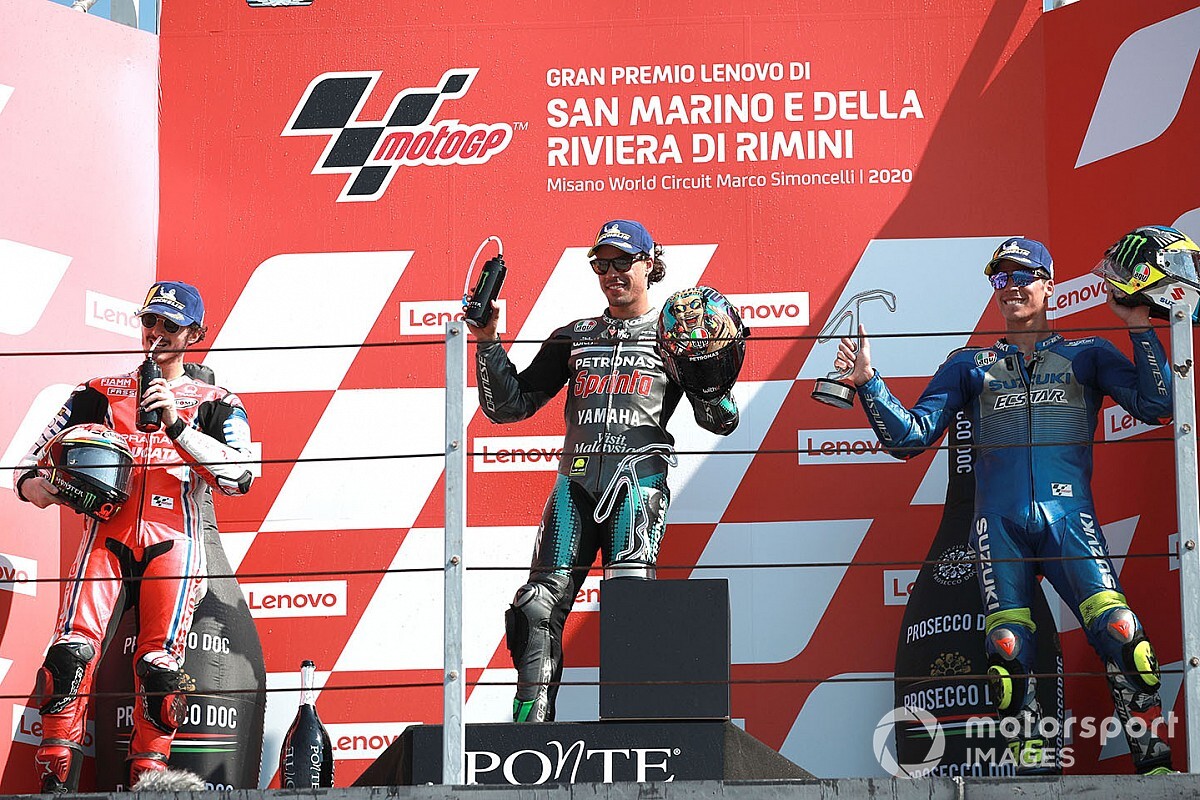 Morbidelli nailed his launch from second on the grid to lead Valentino Rossi on the factory team Yamaha into the first corner, while poleman Maverick Vinales dropped to third and Quartararo fifth.

Rossi tried to take the lead from his protege at the Quercia left-hander, but Morbidelli slammed the door in his face, while Jack Miller demoted Vinales to fouth two corners later.

Morbidelli and Rossi opened up a half-a-second gap to Miller, with Quartararo eventually finding a way through on Vinales with a hard move at the Carro hairpin on lap seven.

As he tried to get close the gap to the front Quartararo crashed at the Rio corner at Turn 4.

He rejoined down in 20th, and after a trip to the pits on lap 20, Quartararo crashed for a second time on a cold front tyre at Turn 6 to cap off a miserable Sunday.

By lap nine, Morbidelli started to eke away from Rossi, with his lead up to over a second by the 14th tour.

Morbidelli continued to ease away from Rossi, his lead standing at two seconds by lap 18.

Miller’s run in third faded as Alex Rins on the Suzuki found a way through on lap 14, with Miller’s injured Pramac teammate Francesco Bagnaia in his first race since the Andalusian GP moving ahead on the same tour.

Bagnaia’s charge continued with Rins on lap 20, before he scythed through on his mentor Rossi at the fast Curvove Turn 11 right on lap 21.

The battle for second closed up in the final laps, with Bagnaia, Rossi, Rins and Joan Mir on the sister Suzuki all gunning for the podium.

Rossi ran a defensive line at Turn 2 to keep Rins at bay lap after lap before Mir demoted his teammate at the start of the final lap after Rins made a mistake at the penultimate corner.

Mir then went after Rossi, bravely carving his way up the inside at Turn 10 to grab third, with the Yamaha rider unable to find a way back through.

Morbidelli eased across the line having backed off his pace in the last laps to become the fourth new winner of 2020, while Bagnaia secured his maiden MotoGP podium in second.

Rins completed the top five ahead of Vinales, whose gamble to run the hard rear tyre appeared to backfire as he quickly faded from the podium battle and ended up sixth.

Andrea Dovizioso was seventh on the factory Ducati and takes a six-point lead in the standings after Quartararo’s crashes, with Takaaki Nakagami top Honda rider in eighth on the LCR bike ahead of Miller and KTM’s Pol Espargaro.

Miguel Oliveira worked his way up to 11th after a poor start on his Tech 3 KTM ahead of works rival Brad Binder, with Aprilia’s Aleix Espargaro, Iker Lecuona (Tech 3) and Avintia’s Johann Zarco taking the final points.

Lecuona was handed a long-lap penalty for failing to start from pitlane after stalling his KTM on the grid on the warm-up lap.

Tito Rabat (Avintia) crashed out late on, while Aprilia’s Bradley Smith was 19th after an early tumble.

Morbidelli "not aiming" at title bid after maiden MotoGP win