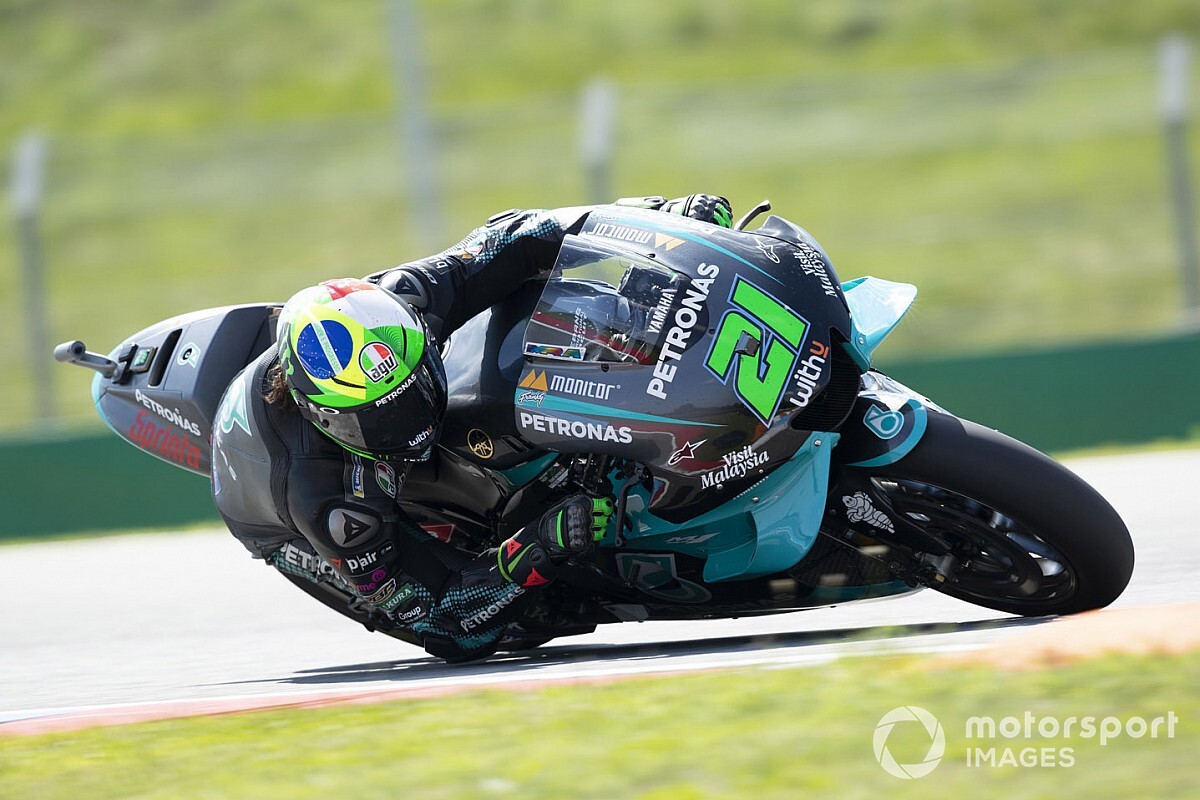 Franco Morbidelli topped a frantic MotoGP FP3 ahead of the Czech Grand Prix, with Alex Rins, Andrea Dovizioso and Jack Miller propping up a volatile Q1 group for qualifying.

Just 0.257 seconds covered the top 10 at Brno on Saturday morning, with Petronas Yamahah’s Morbidelli edging late-improver Johann Zarco on the Avintia Ducati by 0.016s at the chequered flag.

The first real improvement on the combined times from Friday came from Yamaha’s Valentino Rossi, who moved up to sixth overall with a 1m56.815s, while LCR’s Cal Crutchlow moved up to 10th.

The individual timesheet saw Zarco occupy top spot early on on his Avintia Ducati with a 1m56.631s, with Aprilia’s Aleix Espargaro chasing him with a 1m56.728s lap that put him sixth on the combined times.

But four minutes later Morbidelli smashed the field with best lap of the weekend so far, the Petronas Yamaha rider firing in a 1m56.037s to go over four tenths clear of the field.

Morbidelli has been one of the few riders this weekend who hasn’t looked unsettled over Brno’s vicious bumps, with his race pace on Friday one of the strongest.

Alex Rins on the Suzuki was Morbidelli’s nearest challenger until the final five minutes, when the Petronas rider’s mentor and future teammate Valentino Rossi jumped up the order with a 1m56.336s.

A flurry of late flying laps shuffled the order dramatically, with Rossi being shoved to the praecipes just moments after going second.

Zarco fired in a 1m56.053s at the death to secure safe passage into Q2 for the first time this season, with Friday pacesetter and championship leader Fabio Quartararo completing the top three.

KTM’s Pol Espargaro followed the Petronas rider late on to jump up to fourth with a 1m56.140s, with Rossi’s final effort putting him into a safe fifth.

Aleix Espargaro followed Maverick Vinales around in the closing stages to produce a 1m56.183s, which was initially good enough for second, and ensured direct passage into Q2 despite being shuffled to sixth come the chequered flag.

Mir was seventh ahead of Crutchlow, with Vinales and Danilo Petrucci on the factory Ducati taking the final Q2 spots.

Tech 3 KTM’s Miguel Oliveira was heading for a Q2 place late when he crashed at the penultimate corner, and ended up 18th as a result.

His teammate Iker Lecuona completed the depleted field in 21st after Pramac’s Francesco Bagnaia was ruled out with a knee fracture suffered in a crash in FP2.