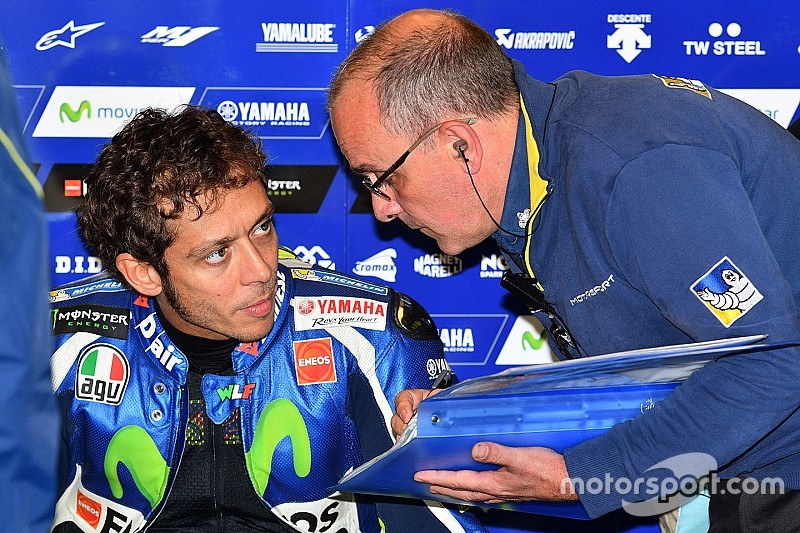 Valentino Rossi led the way in the opening practice session for this weekend's San Marino Grand Prix at Misano that was marked by numerous crashes.

At his home circuit, Rossi seized control of the timesheets in the closing stages with a succession of quick laptimes, the last of which put him 0.136s clear of nearest challenger Pol Espargaro.

The Spaniard has been a factor near the top all session, setting the quickest time with 12 minutes remaining aboard the satellite Tech 3 Yamaha with a 1m33.642s.

That remained the benchmark until Rossi set a 1m33.605s on the works machine, which the seven-time premier class champion swiftly followed up with a 1m33.523s and then a 1m33.451s on his last flying lap.

Espargaro improved to a 1m33.587s late on, ensuring a Yamaha one-two.

Silverstone race winner Maverick Vinales was third quickest on the Suzuki, 0.262s behind Rossi, with the Honda of Marc Marquez only a further 0.018s back in fourth.

Marquez suffered a low-speed front-end crash at Turn 10 midway through the session, but was soon able to get going again with assistance from the marshals.

Andrea Dovizioso was Ducati's best representative in seventh place, but the session was a short-lived one for his teammate Andrea Iannone, who had a high-speed crash at Turn 15.

While the Italian had originally seemed to survive unscathed, he was later taken to the medical centre for an x-ray examination and did not reappear for the rest of the session.

Completing the top 10 were Hector Barbera (Avintia Ducati), Cal Crutchlow (LCR Honda) and Scott Redding, whose Pramac Ducati expired in a cloud of smoke after the chequered flag.

Besides Marquez and Iannone, Eugene Laverty (Aspar Ducati), Tito Rabat (Marc VDS Honda) and Danilo Petrucci (Pramac Ducati) all had falls of their own, albeit none of them causing injury.

Of the wildcards and replacements, Michele Pirro was 14th on the third factory Ducati, Alex Lowes was 18th on the second Tech 3 bike (replacing the injured Bradley Smith), and Xavi Fores (who stands in for Loris Baz) completed his first ever MotoGP session 22nd and last on the Avintia Ducati, 3.6s off the pace.

UPDATE: Ducati has confirmed that Iannone has been taken to hospital in nearby Cesena for additional checks for suspected microfractures to his T2 and T3 vertebrae.