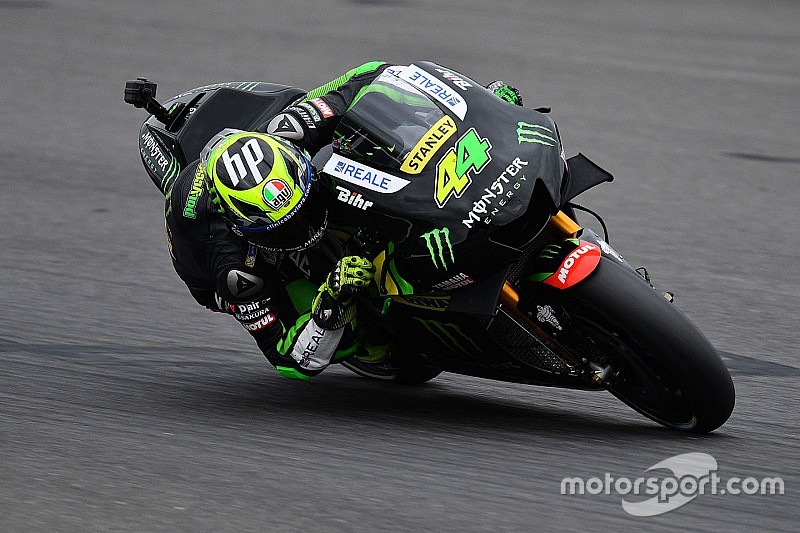 Tech 3 Yamaha’s Pol Espargaro was the shock pacesetter on the opening day of practice for the San Marino Grand Prix at Misano.

Andrea Dovizioso was a close third for Ducati, also lapping in the 1m32s bracket, ahead of Yamaha’s Jorge Lorenzo and Honda’s Marc Marquez.

The morning’s pacesetter Valentino Rossi was sixth in this session.

Dovizioso was the sole factory Ducati rider today, with Andrea Iannone ruled out with a back injury following his FP1 crash.

Dani Pedrosa jumped up to second, 0.134s off the fastest time, with teammate Marquez pushed down to third, three tenths off the pace at this point.

Lorenzo had slumped to 15th after 15 minutes of the session, after having his best lap deleted for exceeding track limits, but leapt to the top of the times during his second run on 1m33.263s, which topped Rossi’s 1m33.451s from this morning’s FP1.

Vinales chipped away at Lorenzo’s 0.458s advantage, trimming it to a third of a second, with Marquez just 0.056s off the Suzuki man.

But Vinales and Marquez had both of those times deleted, so Aleix Espargaro was suddenly elevated to second, 0.380s off Lorenzo’s best time.

As the session drew to its close, Rossi jumped up to third on 1m33.713s, but was quickly eclipsed by both Pol Espargaro and Marquez.

Pol jumps to the top

Lorenzo, who came out later than his rivals for his final run, rose to fourth on 1m33.056s as Pedrosa grabbed second from Dovizioso by 0.067s – and got within 0.065s of Espargaro’s best time.

Vinales dropped to 10th after having a number of laps chalked off for exceeding track limits.

Aprilia’s Stefan Bradl was lapping strongly in the top eight when he crashed at Turn 14 after 10 minutes. Crutchlow also went off at Turn 14, like Bradl dropping the bike at low speed.

Early on, Rossi had a huge falling out with Aleix Espargaro, who he claimed was touring on the racing line at the end of the lap.

Iannone could race at Misano despite fracture