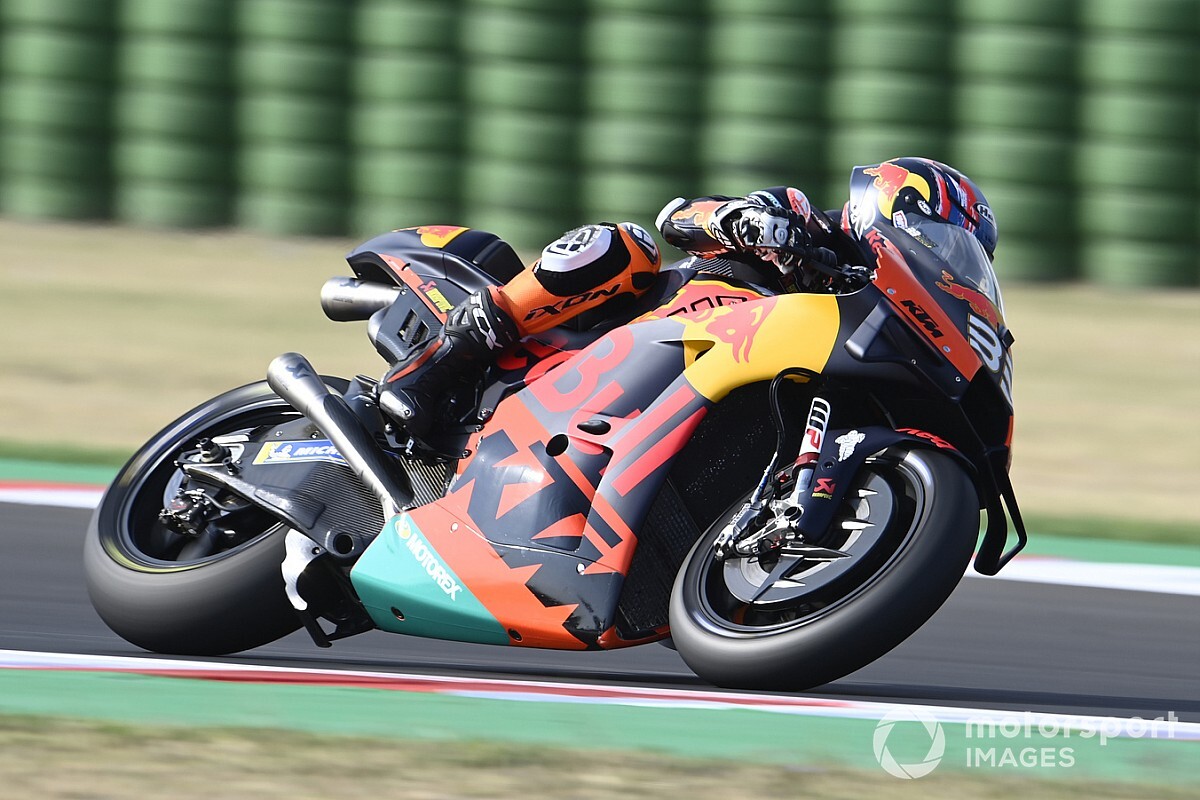 Brad Binder led Takaaki Nakagami in the second MotoGP practice for the Emilia Romagna Grand Prix in a session in which the top five were split by just 0.070 seconds.

Yamaha took control of the timesheets in the early stages of FP2, with Valentino Rossi on the factory team bike with a 1m33.128s.

FP1 pacesetter Fabio Quartararo guided his Petronas M1 to a 1m32.672s to demote Rossi, though this was soon usurped by Miguel Oliveira on the Tech 3 KTM.

Quartararo then began a run of session-best laps, beginning with a 1m32.449s and culminating in a 1m32.273s three tours later.

This stood as the benchmark for the next 15 minutes, before Francesco Bagnaia on the Pramac Ducati edged ahead with a 1m32.138s.

As the field switched to fresh soft rubber in the final seven minutes for a time attack, Espargaro brushed off his earlier tumble to lower the benchmark to a 1m32.023s.

He improved this to a 1m31.699s on the following tour, though he was immediately beaten by Takaaki Nakagami on the year-old LCR Honda with a 1m31.630s.

Honda is a depleted force in the second Misano round, with works rider Stefan Bradl forced to pull out owing to issues with his arm in FP1, leaving just Nakagami and Alex Marquez as HRC’s only representatives this weekend.

With just under three minutes to run, Brno race winner Binder went 0.002s quicker than Nakagami to end the day fastest of all with a 1m31.628s having followed Maverick Vinales across the lap.

Quartararo completed the top three ahead of Vinales, who continued to run the new Yamaha exhaust and tried the carbon swingarm.

Vinales headed Espargaro on the sister works team KTM, with Danilo Petrucci showing much better form on the factory Ducati in sixth ahead of Oliveira.

Johann Zarco lifted himself up into a provisional Q2 place in eighth on his Avintia Ducati despite a late crash at Turn 2.

He headed Suzuki’s Joan Mir and Bagnaia, though the Pramac rider is outside of the top 10 on combined times, with 14th-placed Franco Morbidelli the last rider occupying a provisional Q2 place.

Iker Lecuona (Tech 3) headed Rossi in 11th, with Andrea Dovizioso a low-key 18th on his Ducati.