The 2020 world champion was closing in on the Ducati of Jack Miller for third at the mid-point of the Le Mans race having broken away slightly from the Aprilia of Aleix Espargaro behind.

But on lap 15 of 27 Mir crashed out at the final corner, joining teammate Alex Rins in early retirement in Suzuki's first race weekend since its shock decision to quit MotoGP at the end of 2022.

Mir says the crash was mentally difficult to take having been able to turn around his situation following a difficult Saturday at Le Mans, in which he was forced to go through Q1 "unexpectedly".

"The crash has been painful mentally, because after a difficult Saturday, FP3, I had to go through Q1 unexpectedly, I expected more on Saturday," Mir explained.

"We changed the bike a bit, I was able to up the speed again to qualify more or less good.

"The start was great, I went out with the medium front tyre which was the tyre that in FP2 I crashed badly.

"Straight away I felt good with that tyre, was good for us. I was able to be really constant on the lap times.

"I made a mistake, I went wide, the straight away I was recovering the distance to the top riders again. Every time I was getting closer, it's true that behind the Ducatis it's always difficult to stop the bike.

"I didn't manage in a good way, I made a mistake, a mix of things.

"One thing was this one, another thing was I tried to brake too much, too late, and then I had to trail the brakes more than normal and when I released the brakes I lost the front."

Mir also admits he's not currently a championship challenger as he has slid 46 points adrift of Yamaha's Fabio Quartararo – who was a disappointed fourth on Sunday – but feels the 2022 Suzuki is capable of a title tilt.

"It has been a first part of a season that I feel I have the potential, the bike works," Mir added.

"We are showing flashes of performance, but I cannot put it altogether to make the results that we want.

"I am confident these results will get better. I'm sure once we are on the podium we have to stay there because now we are not fighting for the championship. We are just feeling the way." 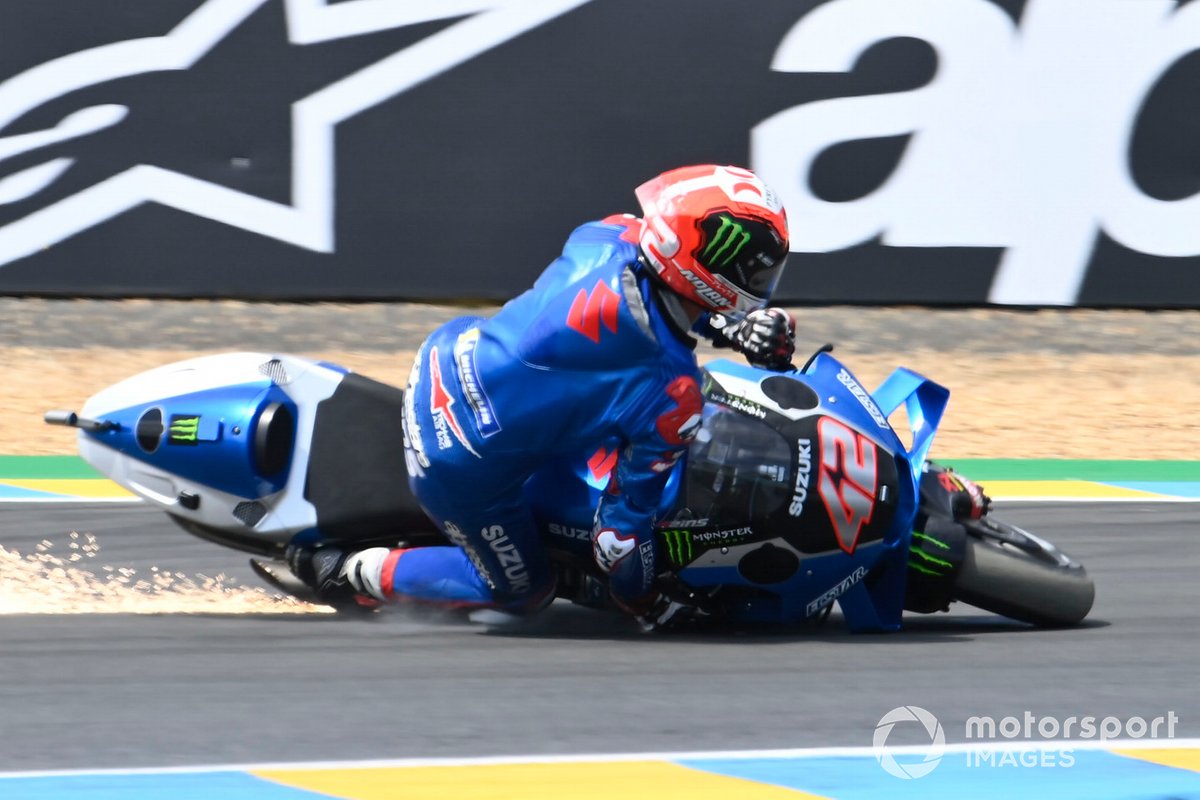 Teammate Rins' Le Mans race ended in terrifying fashion on lap three when he was running in third, after he crashed at the Dunlop chicane having run through the gravel trap.

Rins says he was sucked into the fast first corner by the slipstream of Ducati's Francesco Bagnaia, which led to him tucking the front and forcing him to sit up to run through the gravel where he ultimately tumbled as he tried to re-join the circuit.

"Was scary, sincerely. I mean, it was so scary," Rins said. "We did the most difficult thing, which was to recover positions.

"We did a great start, great first lap. Then I was third behind Pecco, going good, with no stress riding well.

"Then when I arrived into the first corner behind him, I braked at exactly the same point as the lap before and his slipstream [sucked me in]. And then when I touched the brake I lose the front.

"Then I had to go to the gravel and in the gravel it's difficult to manage because in that point you need to control the bike at 200km/h, trying to look at the where the riders are and I was trying to avoid the crash with Miller.

"When I went out of the gravel to re-join the race, I exited with a little bit of angle and then I lose control of the bike."