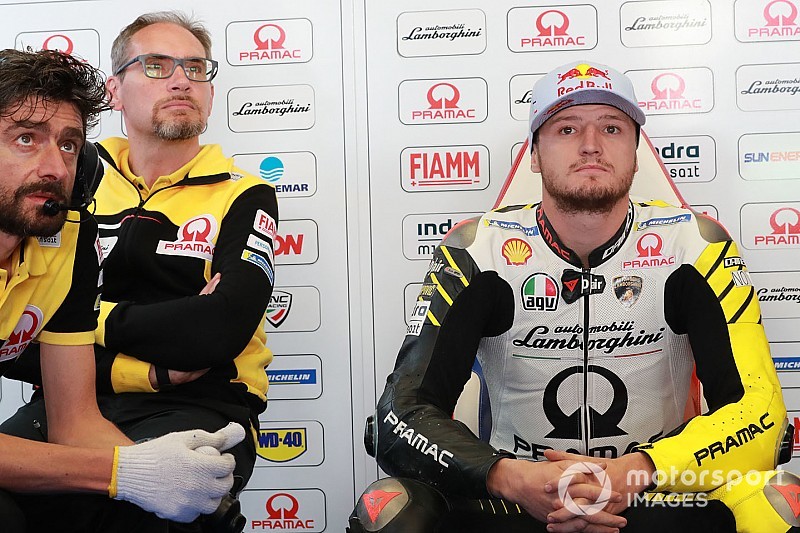 Jack Miller says he “wouldn't accept” a year-old bike if he is to stay with the Pramac team next season, as Ducati's decision on its 2020 MotoGP line-up nears.

He is currently vying for the seat alongside Andrea Dovizioso at the works Ducati squad next year, though his hopes took a knock when former teammate Danilo Petrucci won at Mugello.

Miller's situation has been further complicated by a clause in stablemate Francesco Bagnaia's contract, which guarantees him a GP20 for his sophomore campaign.

With Petrucci's place at the factory team looking more secure, Ducati's current arrangement with Pramac would need to change if it is to be supplied with two GP20s.

Miller says a decision on Ducati's future plans is due by the Dutch TT, and is adamant he would not accept lesser machinery to Bagnaia if he is stay with Pramac.

“No, I wouldn't agree to that,” he said when asked if he would agree to race a GP19 next year.

“I feel I've done my apprenticeship, and I need to be on the factory bike to fight these guys.

“I've been on the satellite bikes and I've been on the older bikes, and it's not easy, especially at the level MotoGP is at and how much each bike is developing each year.

“If you are on a year behind you are already starting on the back foot.”

“If I'm gonna stay here, my main goal is to be the number one rider. I think I deserve it, and I feel that's how it should be.”

Despite the uncertainty over Pramac's current bike situation, Miller believes there is enough possibility for him to also receive a GP20 – but will insist on only signing a one-year deal to get “back in sync” with the factory contracts, which expire at the end of next season.

“It's a financial matter and everything, but I feel I've proved myself enough, I deserve the bike already,” he added.

“Danilo got his first podium at Le Mans, I got my first podium in Texas on the same bike. So I feel I've proved myself enough in order to keep being a satellite factory bike, but I deserve an up-to-date factory Ducati.

“I feel that, I think the Ducati bosses feel that. They're not idiots, they know what they need to do, and we've spoken about it.

“I think we're all on the same page, it's now a matter of really wait and see what their plan is.”

“If I'm gonna stay here [Pramac], I've said it all along I only want to sign a one-year contract, because I feel it gives me extra motivation for the year after; it makes me want to work harder.

“It gives me a better opportunity for next year, and I need to fucking sync up with these other guys' contracts, because the last three contracts I've done have been with very limited options.”

Why Ducati must stick with Petrucci