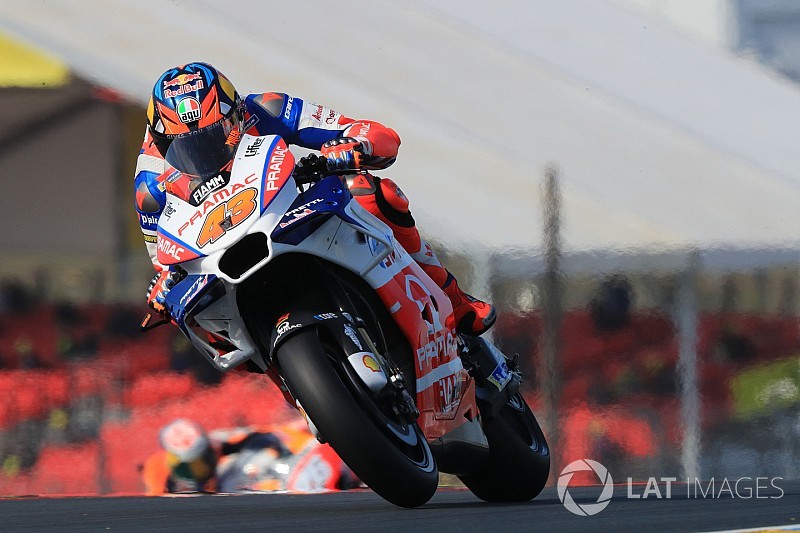 Jack Miller says his fourth place at Le Mans was perhaps his 'most convincing' race, even compared to his maiden MotoGP race win at Assen.

The Pramac Ducati rider just missed out on the podium in France, finishing just over a second behind third-placed Valentino Rossi and six seconds off comfortable race winner Marc Marquez.

The fourth place was also importantly within touching distance of teammate Danilo Petrucci who finished second, with the Pramac riders potentially fighting over a Ducati works seat for 2019.

According to Miller, the Le Mans result may well trump even his Assen win in terms of pure satisfaction – not only because of what's at stake for next season, but because it was a result that came from pure pace, without a single asterisk.

"This was a pretty big result," he wrote in his post-race Red Bull column. "Could be better, could be worse… but all things considered, maybe this was the most convincing race of my career in MotoGP.

"I know, what about Assen 2016, I can hear you saying it. There's never going to be anything that feels like that win, but it was raining, guys crashed out, etc etc.

"I was fourth this year in Argentina when I was on pole and pretty frustrated to be off the podium, but that was another weird race with that start and everything that went on.

"This one in France was different. Less than a second off the podium, six seconds off the win, a dry and normal day, no random stuff happening. Completely on merit.

"Maybe not the most exciting race for me, sure, but definitely one to be happy about."

Miller added that his sense of satisfaction with the result is bolstered by how unexpected it was to be genuinely on the pace all weekend.

"All weekend I had good pace, and I was more hopeful of that rather than expecting it because Le Mans hadn't been great for me in MotoGP, or for Ducati in the past – this is normally a Yamaha track," he wrote.

"But I was within half a second of the session-leading time in every session except first practice, and never out of the Top 10 after FP1. Qualified seventh, was fourth in the morning warm-up… it was a result there to get.

"The best GP17 here last year was [Andrea Dovizioso], and he was 11 seconds off the win – a year later and on the same bike I was six seconds off, so that's pretty damned good."

Having out-performed expectations at Le Mans, Miller reckons he's now got some confidence that he can do likewise next time out at Mugello, a circuit on which he admits he usually 'sucks'.

"Mugello is next, and my first Italian Grand Prix on an Italian bike," he wrote. "That'll be cool, and the Ducati usually flies there too.

"I've generally sucked there (three races, one point), but this year so far has been all about fixing those circuits where I haven't done well before like Jerez and now Le Mans. Why not there too?"

Vinales "didn't care" if he crashed at Le Mans