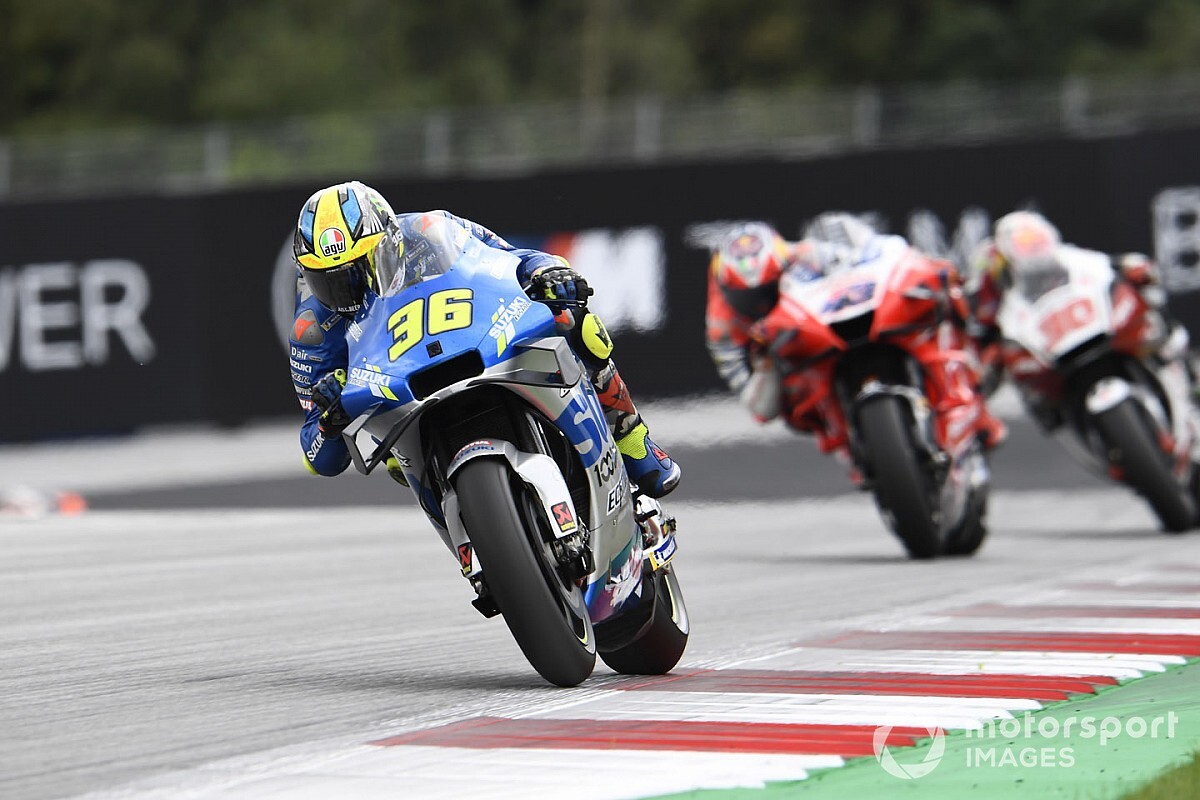 Mir had looked one of the strongest riders throughout the Styrian weekend, and was in total control of the race with a 2.4-second gap to the chasing pack when a brake failure for Maverick Vinales brought out the red flag on lap 17 of 28.

The Suzuki rider had no more fresh medium front tyres left for the 12-lap restart, and so had to complete the second race on tyre he'd already put 16 laps on.

Pramac's Miller - who finished second - says he is "gutted" for Mir as he felt the Suzuki rider "had the thing sorted" having been unable to do anything more than follow him.

"To be honest, I'm gutted for Mir because he was riding really strong," Miller said. I tried to follow him for nine laps, I did but that's all I had.

"I was done. Unless he had tyre problems towards the end, he had that thing sorted. But, gutted for him, but really happy for Miguel [Oliveira]."

KTM's Espargaro, who was third after being pushed wide at the last corner by Miller and allowing Tech 3's Oliveira to come through for a shock maiden win, said the Styrian GP was "Mir's race".

"It was a beautiful race, fighting from the beginning to the end," Espargaro said. "I feel that this race, it was not our race, it was Mir's race.

"He was very fast from the beginning and he was going away. It's a pity for him because he was the fastest today."

Mir ended up fourth in the Styrian GP, and was "angry" at Race Direction not penalising Espargaro one position for exceeding track limits at the final corner on the last lap.

Under the current rules, any rider taking to the green painted run-off on the last lap is automatically docked one place.

Suzuki has lodged a protest with Race Direction, but it is unlikely to come to much given Espargaro was forced out wide.

Mir thinks stopping riders from being able to change tyres during red flag periods should be looked at for the future, but concedes his issue was also caused by only having five medium front tyres for the weekend and that being the only compound that worked for him.

"It's not a bad idea," he replied when asked if bikes should be put under parc ferme conditions during red flags.

"Using the same tyres for the [restarted] race could solve a lot of problems and in our case we considered it during the weekend, but the problem was for on our bike the only tyres that were working well was the medium.

"So, we only have five, and we need one for qualifying, one for FP2, FP1. I need to practice because if not I stay in the box, so it was a difficult situation.

"We had just bad luck, and for the next time maybe we can consider to keep everyone on the same tyres [for restarts]."