Jack Miller says it was "devastating" to be taken out of his home MotoGP race at Phillip Island by a crash that left him battered and bruised.

Making his first and only appearance on home soil as a factory Ducati rider, Miller was well-placed in the lead group when he was taken out on Lap 9.

The culprit was an out-of-control Alex Marquez, who out-braked himself into the hairpin before clattering into Miller's Ducati and sending the Aussie tumbling off the bike. That meant Miller's home race came to a painful end at the very corner that was renamed in his honour on Saturday.

Reflecting on the crash, Miller said he had no idea that Marquez was coming until the moment of impact.

"Not the day I had planned, but it is what it is," he said. "I was mid-corner, about to release the brakes and get on the gas, and I got a front wheel to the middle of my spine.

"Not much I could really do about that. One minute I was looking at the back of [Marco] Bezzecchi's bike, the next minute I was seeing stars.

"I got pretty winded. I feel alright, just a bit bruised."

While initially upset with Marquez, Miller said he wouldn't hold a grudge over what was clearly a mistake.

"What's there to have hard feelings about? At the end of the day, we're all out there trying our best," he said.

"I understand he might have got a little bit carried away trying to get past Marini, but we've all made mistakes. He's as devastated as I am not to finish the race.

"But of course, my first home grand prix after three years... it's not the way I wanted to finish it." 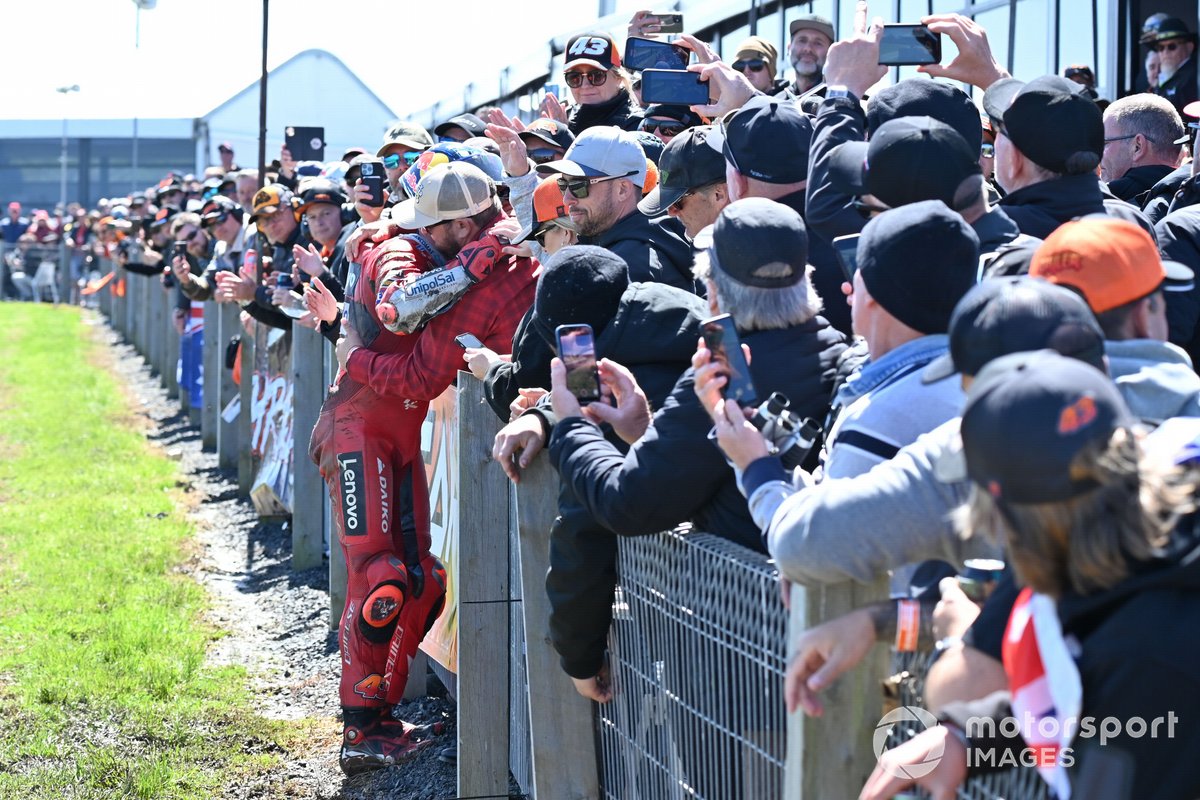 Miller was seen walking over to the corporate suites on the outside of the corner following the crash, where his family and friends have been based across the Australian GP weekend.

He later revealed that he went to apologise to his family for not making the finish, an apology he extended to the wider Aussie fan base.

"Once I got my breath back I wandered over to [my parents] and gave them a hug and said sorry," he said.

"A lot of people have travelled – not only my family, a lot of families around this joint – far and wide to see an Aussie do good. And you kind of feel like you've let them down.

"It's devastating, but it's part of motorcycle racing."

Marquez, meanwhile, accepted full blame for the crash and said he understood Miller's anger at the time.

The LCR Honda rider has since copped a long lap penalty for the crash which he will serve during the Malaysian Grand Prix next weekend.

"I'm really sorry for Jack. I understand that he was angry," he said. "He had all the reasons.

"I made a mistake. I was really careful on that corner because I know it is really easy to do a mistake. On that lap I started to attack a little bit because everyone was passing me at that point.

"I'm sorry for him and his team. We lost a good opportunity to make a good result, but life is like that. Anybody can make a mistake. But that mistake was a little bit too much.

"It's something that can happen to anyone. But it's not an excuse. I made a huge mistake today."