Marc Marquez sealed another perfect weekend at the Circuit of the Americas in Austin, Texas with the reigning MotoGP World Champion dominating the Red Bull Grand Prix of the Americas to take the victory ahead of his teammate Dani Pedrosa who did his utmost to cling on to the race victor while taking a fantastic third place was the Ducati Team rider Andrea Dovizioso.

The race started with a shock with Movistar Yamaha rider Jorge Lorenzo jumped the start in a move that seemed to throw a number of riders off at the front of the grid but Marquez remained unfazed and took over the lead when Lorenzo took his ride through penalty at the end of the first lap. Lorenzo’s teammate Valentino Rossi also had a bad start from fourth with the seven-time MotoGP World Champion badly spinning his rear wheel off the line and instantly dropping the Italian back a handful of places. 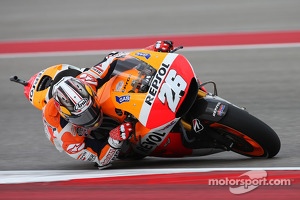 There was also some bad luck at the start for NGM Forward Racing’s Aleix Espargaro who also dropped right back into 12th while it was exactly the opposite for the Pramac Racing machine of Andrea Iannone who got a great start and was circulating in third early on. There was also a good start for the Monster Yamaha Tech 3 machines of Bradley Smith and Pol Espargaro who were chasing LCR Honda’s Stefan Bradl and there were also good starts for the Ducati Team pairing of Cal Crutchlow and also from Dovizioso.

The first couple of laps saw a terrific surge from Rossi who was fighting back to make up the places he lost at the start while it was exactly the opposite for Crutchlow with the British rider experiencing grip issues on his Ducati GP14. The front two pairing of Marquez and Pedrosa were way out in front within the first 5 laps with Marquez stretching his lead with each and every corner while Lorenzo was doing his best to make up positions after his ride through penalty.

The main action in the middle of the race came from Rossi who had caught Iannone but couldn’t pass his fellow countryman and after a couple of laps Rossi began falling back into the clutches of the riders behind with what looked like a problem with the front end of his YZR-M1. There were no such problems for Smith or Pol Espargaro though with the teammates chasing down the factory machine of Rossi and passing him with ease. The first retirement of the race came when Broc Parkes brought his Paul Bird Motorsport machine back to the pits and Crutchlow also pitted in only to re-enter track with a new rear tire a few moments later.

There was also a retirement for Alvaro Bautista and the GO&Fun Honda Gresini team when the Spaniard crashed out of the race and his Open Class teammate Scott Redding was also unlucky in his race after crashing out while trying to get away from the Drive M7 Aspar machine of Nicky Hayden. The worst luck of the day fell on Crutchlow when he crashed out of the race and breaking his right hand in the process while Lorenzo was doing his best to get as many points as he could moving into the top ten nearing the final third of the race. 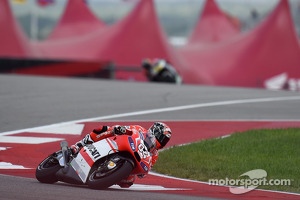 Marquez and Pedrosa were in a different time zone at the end of the race with Marquez taking his time in crossing the line while the battle for third place went down to the wire with Iannone first being passed by Bradl and Dovizioso with the latter having a little more in reserve to grab the final podium place despite a late surge from Smith who was flying at the end of the race. Rossi did his best to hold onto 8th place ahead of Espargaro while Lorenzo didn’t have any more laps to secure any more points and the race also ended badly for Colin Edwards whose NGM Forward Racing machine cut out nearing the end.
shares
comments