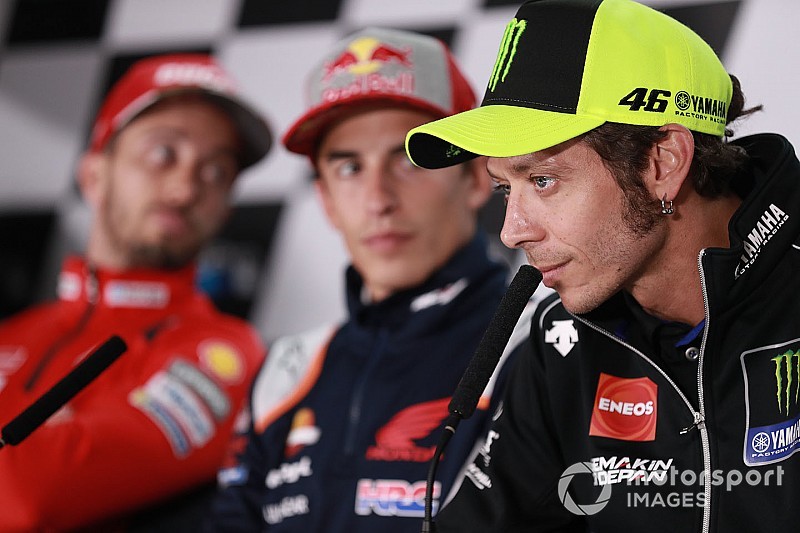 Marc Marquez and Valentino Rossi were both summoned by MotoGP Race Direction after they came close to colliding on their last laps in qualifying at Misano.

Marquez was running behind Rossi during the pair's second runs, and the Honda rider looked set to improve on his final attempt. However, he was so close to Rossi that he had to overtake the Yamaha rider, the move happening at Curvone at very high speed.

But Marquez's corner exit was compromised and he ran off-track, ruining his lap in the process, and Rossi was able to sneak back ahead of Marquez.

Rossi then ran wide at Turn 14, which compromised Marquez, who was still pushing at that point, and the duo nearly colliding.

Neither Marquez nor Rossi were able to improve and they qualified fifth and seventh respectively.

Both riders were summoned to race direction at 4.45 pm local time.

It marks the latest in a long sequence of on-track incidents between Marquez and Rossi, their most infamous clash coming at Sepang in 2015 - when the Italian rider was handed a penalty that affected his title battle with Jorge Lorenzo.

They also collided last year in Argentina, where Marquez took Rossi out, leaving the latter fuming with the reigning champion.

Marquez was also called in by race direction at Brno this year when he had a run-in with Alex Rins in qualifying.

UPDATE: Both Marquez and Rossi escaped the incident without a penalty as the meeting with race direction concluded.

Iannone ruled out of Misano due to shoulder injury